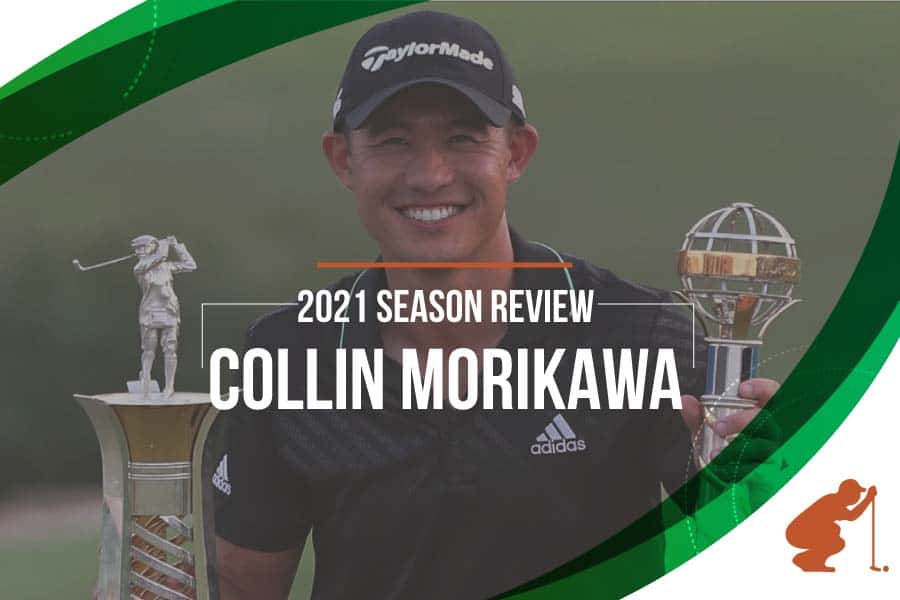 History-Making Year Leaves 24-Year-Old on the Cusp of World’s No. 1 Ranking

Collin Morikawa 2021 season was one round away from ending 2021 as the top-ranked golfer in the Official World Golf Rankings, but he lost a five-stroke lead at the Hero World Challenge, finishing with a four-over 76 to finish tied for fifth. That left him just behind Jon Rahm and was just about the one disappointment for the 24-year-old in what amounted to a history-making 2021 season.

After scoring his first top-tier PGA Tour win in July 2020 at the Workday Charity Open, defeating Justin Thomas in a playoff, Morikawa took the golf world by storm by winning the PGA Championship three weeks later. After reaching the BMW Championship in the FedEx Cup playoffs as a rookie in 2019, Morikawa advanced to the Tour Championship in 2020, finishing sixth.

That put Morikawa on the radar heading into the 2021 season, and he did not disappoint.

After a slow start during the fall portion of the 2020-21 FedEx Cup season, Morikawa caught fire in January and February, recording three top 10s in four events, including a win in a WGC event, the World Golf Championships-Workday Championship at the Concession. Prior to that win, he finished tied for seventh at both the Sentry Tournament of Champions and Sony Open.

That event was scheduled to be held in Mexico but was moved to The Concession Golf Club in Bradenton, Florida due to the COVID-19 pandemic.

Morikawa was not in the top 10 after day one, but a 64 in the second round moved him up to a tie for second, one shot behind Brooks Koepka after 36 holes. He then shot a 67 on Saturday to take a two-shot lead over Koepka and Billy Horschel into the final round, where he shot a 69 as opposed to the 70s that the two challengers put up. Morikawa won with a -18, three shots better than Horschel, Koepka, and Viktor Hovland.

“With how good the field was, how good by game felt, to close it out with such a stacked leaderboard coming after me, it really means a lot [to win],” Morikawa said after that victory.

Morikawa Heats Up With the Weather

After a slower March and early April (including a 18th at the Masters), Morikawa picked his game back up starting in the week after August, tying for seventh at the RBC Heritage. Two weeks later, he finished eighth in his attempt to defend his PGA Championship title. Two weeks after that, he reached a playoff at the Memorial Tournament but lost to eventual 2021 FedEx Cup champion Patrick Cantlay in the playoff.

Unfazed, he followed that up by tying for fourth place at the U.S. Open. He then took a break to prepare for his first Open Championship, and he tackled the links course Royal St. George’s in Sandwich like an old pro on the final day, shooting a 66 in the final round to win his second major. In the process, he became the only golfer to win two majors in his first attempt, having done so the year prior at the PGA Championship (there was no Open Championship in 2020 due to COVID-19).

In that final round, he passed Louis Oosthuizen, who set the 36-hole tournament record that weekend and led for most of the event, and held off major winners Jordan Spieth and Jon Rahm to win the Claret Jug in front of a full gallery of fans, something Morikawa was unable to experience in his last major win, as it came during the height of the pandemic.

Morikawa become only the third golfer in the last 46 years to win The Open on his first try, joining Ben Curtis in 2003 and Tom Watson in 1975. Morikawa said that he challenged himself against the links-style course and the results came naturally.

“I came out this week and didn’t worry about playing against everyone else,” Morikawa said after his round. “…Learning a links-style golf course is tough because there’s so many slopes, and I like to know everything. I like to know every little detail possible, but it’s hard to do that out there.”

Just two weeks later, Morikawa headed to Japan to take part in the Tokyo 2020 Olympic Games. While an American, Morikawa has Japanese heritage, and with the way he was playing, he was a favorite to win the gold medal.

The tournament didn’t start his way, as he shot a 69 and 70 in the opening two rounds of the no-cut event, but he improved to a 67 on Saturday and scorched the field with a 63 on Sunday to make a seven-way playoff for the bronze medal, which he was unable to win.

A Cooler Finish to the FedEx Cup Season

Perhaps the ambitious schedule—along with playing in England and Japan in a three-week span—caught up to Morikawa, as he played four of the next five weeks after the Olympics but did not yield solid results. He came in 26th at the WGC-Fed Ex St. Jude Invitational to clinch the top spot in the FedEx Cup standings at the end of the regular season, but it was all downhill from there. He missed the cut at The Northern Trust, but he amassed enough FedEx Cup points to qualify for the BMW Championship. After a 63rd-place finish there, he came in 26th out of 30 golfers at the Tour Championship, finishing the season a disappointing 20 spots lower than he did after the same event in 2020.

But it’s all part of the learning process for the Las Vegas resident who was completing just his second full season on the PGA Tour, and the 2021 season didn’t include a big pause like it did in 2020 at the start of the pandemic.

As expected, a little rest did Morikawa very well. He didn’t lose in four matches at the Ryder Cup, earning 3.5 points out of a possible four in his first appearance in the event. After winning a four-ball and two foursome matchups, he tied with Viktor Hovland in a singles match on Sunday, but that half-point was the clincher for the United States team in their historic rout of Europe—the 19-9 final score was the largest margin of victory since the tournament adopted its current format in 1979.

Morikawa didn’t choose to participate in many events this fall, but he did enter the CJ Cup at Summit, as the event took place at his home golf club at Summerlin in Las Vegas.

After putting himself in contention after a 65 on Saturday, Morikawa shot a 62 on Sunday. He and Rory McIlroy surged past 54-hole leader Rickie Fowler. Morikawa finished his round with an eagle on No. 18 to finish at 24-under, but McIlroy eagled No. 15 and parred the final four holes to beat Morikawa by one stroke.

Morikawa then went back to Japan to compete in the ZOZO Championship, where he finished seventh to eventual winner Hideki Matsuyama.

History Made on the European Tour

After the ZOZO, Morikawa took nearly a month off, setting his sights on the DP World Tour Championship in Dubai, which is the final event of the season on the European Tour. Due to his wins in The Open and the WGC event (both are also official European Tour events), Morikawa led the season-long Race to Dubai standings heading into that tour’s finale.

After McIlroy led for the first three days, Morikawa flipped the script from the CJ Cup on the Northern Irishman, making five birdies in the final seven holes to overtake McIlroy and become the first American to win the event. In addition, he became the first American to win the European Tour’s Order of Merit, which is awarded to the golfer atop the Race to Dubai standings after the DP World Tour Championship.

“It’s an honor to be the first American to do that, to put my name against many, many greats and Hall of Famers,” Morikawa said after the win. “It’s special; I get touched up just talk about that.”

Morikawa said that his goal was to always play around the world. The pandemic made that a bit difficult, but he was proud that he was able to accomplish so many goals on the international stage in a short period of time.

“We didn’t know what cards were going to be dealt,” he said. “To have this chance and finally close it out, and not just closing it out with a top 10 or something, but to actually win the DP World Tour Championship, which concluded with the Race to Dubai, [there’s] not a better way to finish.”

What Does the Future Hold for Morikawa?

Golf can be a fickle game, as many young phenoms have taken the tour by storm and couldn’t sustain it. Jordan Spieth was one of the best golfers in the world in the mid-2010s, but he slumped a bit, not having won from 2017-21, even though it appears that he has regained some of his form in recent months.

Becoming the world’s top-ranked golfer is likely to be a formality in 2022, especially if Jon Rahm continues his sabbatical away from the game.

There is great value currently in Morikawa to win the 2021-22 FedEx Cup title. Since he didn’t play many events this fall, coupled with his struggles in the playoffs last year, Morikawa is behind seven other golfers at +2000 to win the Tour Championship. Considering that he finished sixth at East Lake in 2020, he can play well there, and since he led the FedEx Cup standings after the regular season in 2021, it stands to reason that Morikawa will be in contention come August 2022 and that his poor playoff performance a season ago was likely an anomaly until he proves otherwise.

As for future majors, Morikawa has two at age 24. It’s unfair to compare him to Tiger Woods and the 15 he has amassed, but he’s only just four away from the six that golf legends Phil Mickelson, Lee Trevino, and Sir Nick Faldo have won, and that’s great company to be in. A career grand slam also is achievable, as he already has two of the four and was eighth at the U.S. Open last year. Believe it or not, just five golfers have attained this feat—Tiger Woods (the only one since the 1980s to record the feat), Jack Nicklaus, Gary Player, Ben Hogan, and Gene Sarazen.

A good performance at the Masters would cement Morikawa as one of the potential all-time greats of the game. With pressure-packed wins in two majors already, along with the gutsy performances in high-leverage situations at the Ryder Cup and DP World Tour Championship, Morikawa showed that he can win the big ones. But can he win the really big one in Augusta? That’s still the one tournament that is set apart from the other majors, and the game of golf can have another superstar on its hands if he can win here over the next few springs.

In two Masters appearances, Morikawa was 44th in 2020 and 18th in 2021, the only major he does not own a top-10 finish in. It may not be fair to expect him to win this year (his odds are +1800), but expect this ultra-competitor to continue to improve at one of golf’s most famous addresses until he’s contending for a green jacket.

If Morikawa does indeed become one of the all-time greats, history will show that 2021 is the year that truly began his path to greatness.

Sign up and make sure to stay tuned for Collin Morikawa 2021 season updates, golf news and PGA Tour schedule