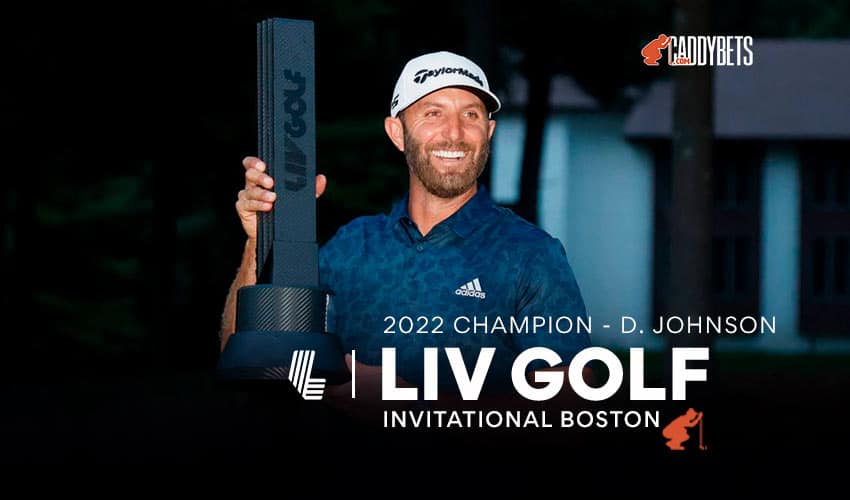 Dustin Johnson had been the best LIV Golf pro to have not yet won an event, but that changed on Sunday when he sunk an eagle putt on the first playoff hole to win the LIV Golf Invitational-Boston over Joaquin Niemann and Anirban Lahiri.

Johnson’s putt on No. 18 was moving fast. If he didn’t have the line, it may have made for a difficult birdie putt, but the ball hit the back edge of the cup so hard, it bounced up in the air and fell in for eagle—easily the single-best highlight of the four LIV Golf events so far.

“It was going a little fast, but it was a good line,” Johnson said with a big smile. “I got some unlucky breaks [on No. 18] the first time around. It owed me one, and I got it.”

Johnson’s win was worth $4 million, and for the third time in the four-event history of the series, his team—consisting of himself, Talor Gooch (sixth), Pat Perez (15th), and Patrick Reed (31st)—won the team portion of the tournament, netting each member $750,000. Johnson now leads the money list with nearly $10 million in winnings in four tournaments.

“I feel like I’ve had a really good chance to win every single week, just haven’t played as well on Sunday as I’d like to. But played really nicely today,” Johnson said.

Niemann, who was playing in his first LIV Golf event after joining the series on Tuesday, tied for runner-up along with Lahiri, who just missed an eagle putt on No. 18 in regulation that would’ve won him the tournament.

“I did everything that I could,” Niemann said. “Hit a few good putts at the end but they didn’t go in. It’s the way it is. I think it’s going to pay me back one day.”

Lee Westwood set a single-round LIV Golf record with a 62, but it didn’t end the way the former world’s No. 1 golfer wanted.

He was tied for the lead going into the final three holes, but he bogeyed two of them to finish a stroke short of the playoff.

“The lob wedge was a little fat [on the par-4 third hole],” Westwood said. “Make 3 and I win the tournament, and I make 5. It’s a sickening way to finish.”

LIV Golf utilizes a shotgun start, so No. 3 was the finishing hole for Westwood.

Cameron Smith, also making his series debut, made a run on Sunday by finishing with a 7-under 63, but a bogey on his 17th hole also cost him a berth in the playoffs, as he finished tied with Westwood for fourth place.

“Really thought I was out of it after yesterday[‘s 69], but I played really solid today,” the 2022 Open Championship winner said. “Gave myself plenty of looks, which I needed to do.”

The series has just one week off before playing its fifth of eight events this year. It will be in the Chicago area at Rich Harvest Farms, which hosted the Solheim Cup (the women’s version of the Ryder Cup) in 2009.