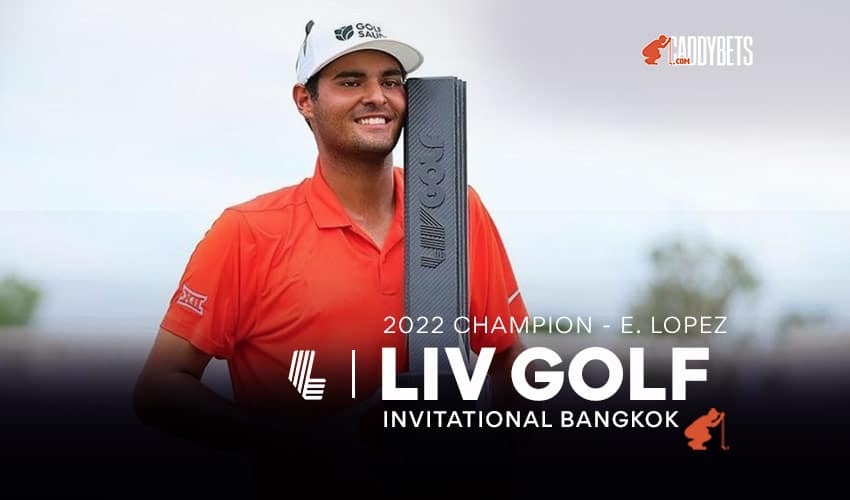 In just his fifth pro start (all with LIV Golf) after leaving Oklahoma State, Eugenio Lopez-Chacarra won the LIV Golf International Series Bangkok by three strokes over Patrick Reed on Sunday, tying for the largest margin of victory in LIV’s six events and shooting a 19 under, which is the lowest 54-hole score in LIV’s young history.

The Stonehill Golf Club north of Bangkok in Thailand was hosting its first-ever event after opening just two months ago, and Lopez-Chacarra handled the 7,800-yard monster with relative ease.

“Obviously I think I played great golf. I hit the ball great all week. I had two bogeys in 54 holes and my goal was to have zero,” he said. “But the course is in great condition so you can go low, but also I think I played really good. More birdies than bogeys. That will make it.”

The 22-year-old, the youngest winner in LIV Golf, didn’t have a bogey until the fourth hole on Sunday. The two-time first-team All-American at Oklahoma State was up to No. 2 in the Amateur World Golf Rankings before signing a three-year deal with LIV over the summer.

The youngster pocketed $4 million for the win and another $750,000 because his team, the Fireballs, won the team portion of the event. Eugenio Lopez-Chacarra is on the all-Spanish-speaking team of captain Sergio Garcia, Abraham Ancer, and Carlos Ortiz.

The team win broke the four-match winning streak of the Four Aces, but team captain Dustin Johnson—despite his first LIV finish outside the top 10 (16th)—captured the individual series championship with one event left to play. He stands 42 points ahead of Branden Grace, and only 40 points are issued to the winner, so Johnson cannot mathematically be caught.

Now, Johnson will turn his attention to the Four Aces’ attempt at a team championship later this month in Miami.

“It’s an honor to be LIV’s first individual season champion,” said Johnson, who pockets an extra $18 million for the championship. “Our team is in a really good position with two events to go and I’m looking forward to further contributing to LIV Golf’s exciting story and continued growth.”

“The first chapter of LIV Golf’s history could not be written without Dustin Johnson’s name. By any measure, DJ is among the elite players in the world,” said LIV Golf CEO and Commissioner Greg Norman.

LIV Golf Up Next

LIV remains in Asia but ventures to the Middle East to play this coming weekend in Saudi Arabia. It’s the final individual competition of 2022, and Grace, Reed, and Cameron Smith have a shot at second and third place in the standings, which pay a bonus of $8 and $4 million respectively.