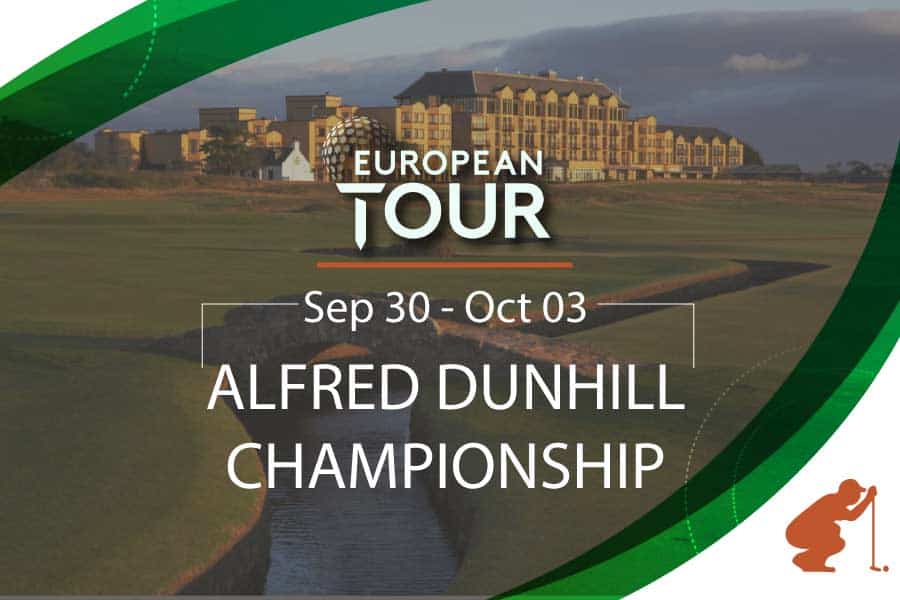 For the first time since 2019, the Alfred Dunhill Championship is set to tee off on three of Scotland’s most famous courses—Kingsbarns, Carnoustie, and the Old Course at St. Andrews. Each of the first three rounds will be contested on one of those courses, and then the final round will be at St. Andrews.

Former champions of the event have come from the Ryder Cup in Wisconsin in the U.S. to be here, including Ryder Cup captain Padraig Harrington, assistant captain Martin Kaymer, and Tyrrell Hatton. In addition, team members Shane Lowry, Tommy Fleetwood, and Sam Horsfield are in Scotland for the 20th edition of this event.

The Final British Event of 2021

This is a pro-am event where each golfer plays the first three rounds. Then, the top-60 pros (including ties) join the top-20 pro-am teams for the final round on Sunday at the Home of Golf. Amateurs include athletes from other sports (boxer Wladimir Klitschko), celebrities (Andy Garcia, Huey Lewis, and Sir Steve Redgrave), and even fathers of fellow golfers (Billy Horschel Sr., and even though he isn’t playing this year, Rory McIlroy and dad Gerry nearly won the pro-am in 2019). The championship team two years ago was Tommy Fleetwood and Ogden Phipps II.

In 2019, Frenchman Victor Perez won the professional part of the tournament over Matthew Southgate, who bogeyed the Road Hole (No. 17) and allowed Perez to win by a stroke after he parred No. 18. It was Perez’s first win on the European Tour, and he is at +2200 to repeat.

The other big story here is Billy Horschel, who was left off the U.S. Ryder Cup team but is trying to become the first American to win the Race to Dubai. He is in second place in the standings behind Collin Morikawa, another American who is on top of the standings by virtue of his win at The Open Championship, but he isn’t competing in this event. Horschel won his first World Golf Championships title earlier this year and also claimed his first Rolex Series win on the European Tour three weeks ago with a win at the BMW PGA Championship at Wentworth, the first American-born player to do so since Arnold Palmer.

“So hopefully, I can play well this week, and then obviously, it’s going to come down to that week in Dubai, who plays the best out of some of those guys at the top.”

Shane Lowry, the 2019 Open champion, is the odds-on favorite here, teeing off at +1000 on Thursday. He only won one point in his three Ryder Cup matches, but he said that the Alfred Dunhill is one of his favorite events of the year, so perhaps that will put him in the right mindset to have a bounce-back week on the three historic courses.

“These are the weeks that maybe you do go out and play your best and have a chance to win the tournament at the end of it,” Lowry said.

Fleetwood enters the tournament at +1200. The 2017 Race to Dubai champion has had a solid month, finishing tied for 12th at the BMW PGA Championship and was tied for second the week prior at the DS Automobiles Italian Open.

Swede Alex Noren, one of the standouts of the 2018 Ryder Cup, missed out on this year’s team but is one of the favorites here at +1500. He’s only played once since missing the cut at The Open, and that was a 27th-place finish at Wentworth three weeks ago, where he shot a 67 in the final round.

Thomas Pieters is +2000. The Belgian is coming off a pair of ninth-place finishes at Wentworth and then two weekends ago at the Dutch Open. Including his 18th-place finish at the Italian Open, and Pieters has been under par in all 12 rounds he’s played in the month of September.

Sam Horsfield is another Ryder Cup participant and is at +3000 this week. He hasn’t enjoyed the form he did around this time a year ago when he won the Hero Open and the Celtic Classic in a three-week span, but he plays well on links courses.

One of a pair of golfers at +3500 is Scotland-born Robert MacIntyre. The 25-year-old played well in his rookie campaign in 2019 and won at Cyprus last year but has struggled a bit in 2021, and his missed cut at Wentworth sealed his Ryder Cup fate of not being selected as a captain’s pick. But he finished in the top 10 at The Open at Royal St. George’s and was sixth at Portrush in 2019, so he’s another links-style favorite who is in need of a breakthrough win on the European Tour. MacIntyre, who played in the U.S. quite a bit this year, spent the Ryder Cup weekend playing shinty with his local team, so he could be rested and ready for a solid conclusion to the season, as he currently sits in 17th place in the Race to Dubai standings.

Here are the latest odds from Jazz Sports for the 2021 Alfred Dunhill Championship.