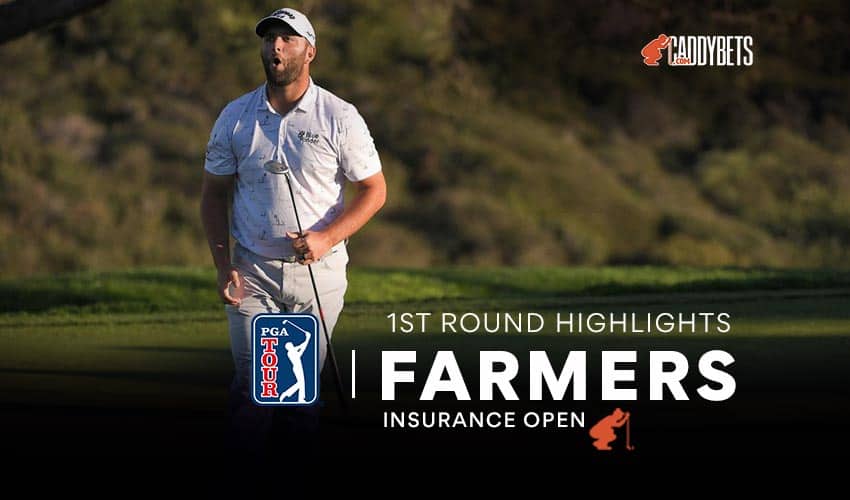 This week the PGA Tour stays on the west coast to play the world-famous Torrey Pines for the Farmers Insurance Open. World No.1 Jon Rahm, who was the favorite coming into the tournament, seems to love Torrey Pines. Less than a year after winning the U.S. Open here, Rahm jumped to the top of the leaderboard after round two with a seven-under 65 on the North Course. Rahm shares the lead with both Justin Thomas and Adam Schenk at 13-under par for the tournament.

Schenk is the biggest surprise of the tournament so far, as he actually shot a ten-under 62 on the day to join Rahm and Thomas at the top of the leaderboard heading into play on Friday. Schenk parred his first three holes, then played the next eight at eight-under; he birdied all of them and then, for good measure, tacked on two more.

Thomas was solid throughout the round, as he had nine birdies and no bogeys for a final round of 63. Rahm birdied three of his first four holes and three of his final four to finish with a 65.

What a difference a day makes, as the leaderboard trio of John Rah, Justin Thomas, Adam Schenk rolled into the third round 13-under playing in the final pairing of the day.

Expecting to build on their lead, all three golfers ran into issues dropping them from their top spot when the round finished. Thomas shot a one-under 73, dropping him into a tie for fifth and moving his odds to win the tournament to +900, as projected by JazzSports. Schenk dropped to a tie for the thirteenth place after he shot a 75 and basically took himself off the table as a favorite to win the tournament.

The World No. 1 Rahm also struggled for most of the day. Rahm shot an even-par 72 but was two over on his back nine after making the turn with the lead. He double-bogeyed the 10th hole and never really got back on track after that, finishing the day at -13 and one shot off the lead. Even after dropping out of the top spot, Rahm is still considered the favorite to win here on Saturday with his odds of +275, as projected by Jazzsports.

So, who took advantage of the leader’s struggles? Two golfers, actually. Jason Day and the 25-year-old Will Zalatoris jumped to the top of the leaderboard at fourteen-under for the tournament. In the 2021 PGA Tour Rookie of the Year, Zalatoris inserted himself into contention for Saturday’s final round by going seven-under on Friday to surge into the lead and sits right behind Rahm at +400 odds to win on Saturday, as projected by Jazzsports. As a result, Zalatoris finds himself in the final pairing of the final day on Saturday as he tries to outduel the world’s No. 1 golfer. Zalatoris has been strong so far this season, as he posted a strong showing last week at the Amex and seems to be gaining confidence week after week.

My pick to win on Saturday is still Rahm. I think Saturday will be a statement round for him, especially after not playing up to his standards on Friday. So look for Rahm to hoist the Trophy once again at Torrey Pines.

After Round 2 at the Farmers Insurance Open, Jon Rahm remains the favorite

Join us to receive our daily Golf content, and make sure to stay tuned for Farmers Insurance Open updates, golf news, and PGA Tour schedule.