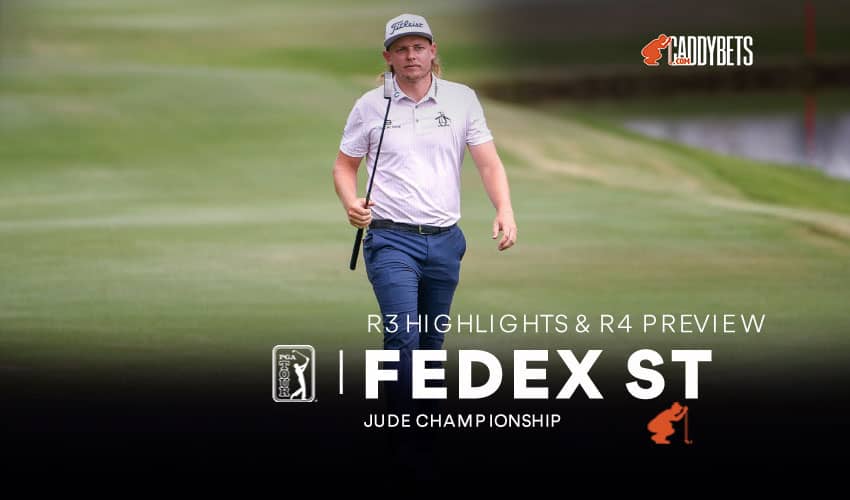 As we head into the final round of this year’s FedEx St Jude Invitational it’s a case of as you were, as J.J Spaun managed to maintain his third-round lead to head the field by a single stroke. Austrian Sepp Straker withstood yesterday’s pressure and starts the day alone in second place.

A trio of players, which are headlined by Will Zalatoris and Cameron Smith will start the day two behind and are still very much in contention.

Fifteen players will start the day within four strokes of Spaun’s lead. Everything is set for a dramatic day of golf.

It looked like Spaun’s lead would be erased but the Californian produced some superb golf towards the end of his round, scoring birdies on both the 16th and 17th holes to lead the tournament by one.

If it wasn’t for a bogey on his final hole, Sepp Straka would have started the day level with Spaun. The Austrian has had a breakthrough season which included a win at this year’s Honda Classic. With that experience behind him, it would be foolish to discount him.

Trey Mullinax has carried on his good form after winning the Barbasol just a few weeks back and in tough scoring conditions, he produced a solid round that yielded just one bogey. He’s another that could go close.

One of the rounds of the day belonged to Will Zalatoris. Zalatoris shot a superb -5, 65 to throw himself right into contention. The American made the tough decision to recently switch caddies and the move already seems to be paying dividends. No man in the field perhaps deserves a victory more than Zalatoris following two top-three finishes in the majors this season.

Just as he was yesterday, Cam Smith will start the day as the favorite. Smith had a mixed day yesterday but showed all of his class with three birdies on his back nine. It’s his putting that sets him apart and as we saw at St Andrews, when he can string it all together he can be exceptionally hard to beat.

Following his great third-round display, Will Zalatoris starts as the second favorite. This is Zalatoris’s first career playoff start and he is looking to complete it in the perfect way. There is an argument that Zalatoris is the best player on Tour without a PGA victory and he will be desperate to put that record right here.

Current leader J.J Spaun will start the day as the third favorite. Spaun has played exceptionally all week, and his performances over his closing holes yesterday signaled that he is ready to win and shouldn’t be discounted.

With this tournament being as open as it is, it wouldn’t be a surprise if someone from further down the leaderboard were to make a charge.

Collin Morikawa has had a poor year by his lofty standards and is yet to win this season. He played some fine golf yesterday with a solid -4, 66. Although starting day five behind, he will be a danger to all if he can get it going early.

The same can be said of Jon Rahm. Like Morikawa, he will start five shots behind but if he can get the putter working he can certainly have a say in proceedings.