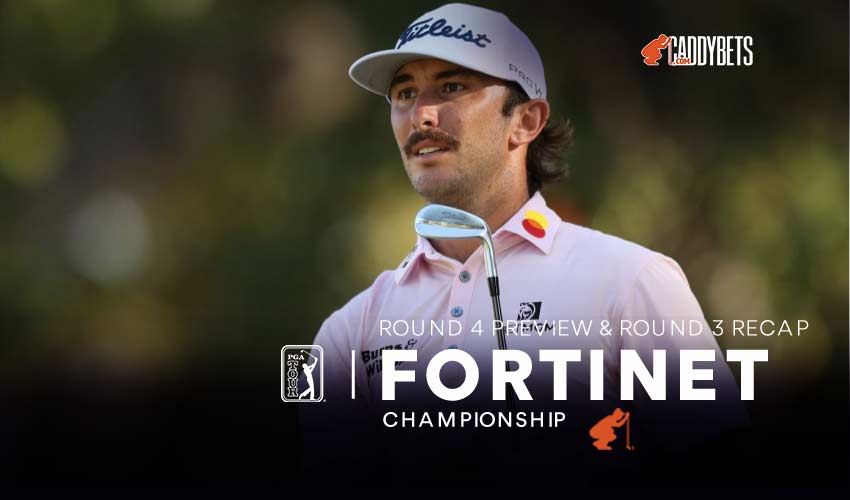 Fortinet Championship: Round 4 Preview & Round 3 Recap

Leading the way on a score of -13 is the unheralded American Justin Lower. The American leads the way for the first time in his PGA career after 54 holes and made the most of slightly calmer conditions to record a composed -3, 69.

As the third round developed so too did the weather. Starting the day at -12 were the pair of Max Homa and Danny Willet and both had differing days in tricky and blustery conditions.

Homa played some solid golf, matching his two bogeys with two birdies to record a fairly non-eventful even par round of 72. Homa will start today’s final round a stroke behind Lower.

Willet’s day was far more eventful. The Englishman is looking to win his second PGA Tour event and bounced back from a disappointing double bogey on his 9th hole with two birdies on his back nine to also record an even par round.

With conditions being more favorable for some of the earlier starters, a couple of players fired themselves into contention with some fine golf.

The round of the day belonged to the pair of Davis Thompson and Harrison Endycott. Both shot a stunning -7, 65, and will start the day three and four shots off the lead respectively.

A special mention should also be given to Paul Haley II who shot a -6, 66 to lie three strokes off the lead.

Despite a fairly indifferent day, Max Homa is still the favorite to land this year’s Fortinet. A winner of the Wells Fargo Championship earlier in the year, Homa battled well to record a level par 72 and keep himself right in contention. Homa certainly has the game to win this tournament he will just need to rediscover his touch on the greens that slightly deserted him yesterday.

Our current leader Justin Lower finds himself second in the betting despite holding a one-stroke lead. Lower is a name unknown to most but he did record two top ten finishes on Tour last season.

This is the first time in his PGA career that the American will tee off in the final pairing and his chances will rest on whether he can handle the pressure on what could be a truly momentous day.

Danny Willet rounds off the top three in the golf betting and despite sitting at 149 in the world has won the most tournaments out of those in the top three on the leaderboard. Willet won’t be unduly impacted by the pressure but knows a win today could help relaunch his career.

Behind these three players, there is value everywhere you look.

Adam Svensson had a great day on the greens yesterday and his third-round 67 will see him start the day just three off the lead. Clearly hitting the ball well, odds of +2000 could be a great value play.

Despite not being at his best yesterday it would be an error to discount Sahith Theegala. Theegala was number one on Tour last season for the highest amount of birdies and although he starts the day four behind, that gap could be eroded quickly if he can get his putter hot. Odds of +2500 look generous and could be worth a small play.

Follow us on Social Media for more Fortinet Championship Round 4 Preview & check the Official World Golf Ranking, and more!