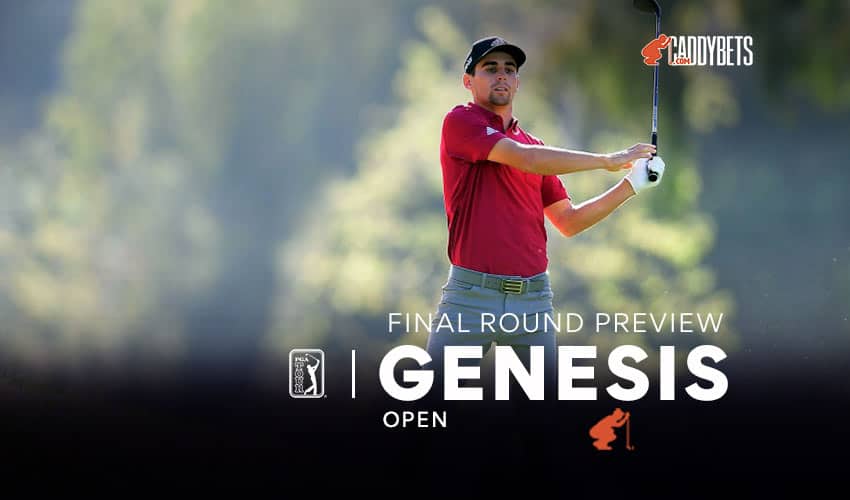 Imagine finishing your third round in a tournament at 19-under par, setting a 54-hole scoring record, and still feeling like you didn’t play that well? Here is our Genesis Invitational Final Round Betting Preview.

That’s precisely what happened to Joaquin Niemann on Saturday at the 2022 Genesis Invitational. Unfortunately, that doesn’t bode well for the rest of the field chasing Niemann. As a result, Niemann increases his odds to win the tournament to -300, as projected by Jazzsports, and now must shoulder the expectations to win here on Sunday.

Niemann, whose only PGA Tour win came in 2019, made a two-putt birdie at the par-five first but failed to get up and down from the greenside bunker to save par at the next, only to respond with three birdies in a four-hole stretch from the fifth to reach the turn in 32. A very aggressive tee shot at the drivable 10th hole resulted in a 20-foot eagle from just off the green, which led to bogeys at the 12th and 15th to open the door a bit.

It wasn’t all butterflies and rainbows for Niemann on Saturday; after touching 21 under following an eagle at the 10th hole, it seemed as if the tournament was a wrap, but he played the next eight in 2 over. He might have let a few golfers back in it, including Cameron Young.

Young must be super frustrated. I mean, he nearly tied the 54-hole scoring record at Riveria, but he looks up at the leader board to find himself still three strokes back of the leader.

Heading into Sunday, Young is very much in this tournament, and he should build off the fact that Niemann may have opened the door back up late yesterday. Young has been incredible, and he sits right behind Niemann at +350 odds to win the tournament, as projected by Jazzsports, so he needs to capitalize on any mistakes made by Niemann to gain strokes. Young will have to be almost perfect off the tee on Sunday, as that was the one hole in his game on Saturday, and if he does, this tournament could get really interesting heading into the final holes on Sunday.

Sitting behind Niemann and Young is Viktor Hovland at 13-under par. Hovland had a solid round on Saturday, shooting the round-of-the-day 65 and increasing his odds to win the tournament to +900, as projected by Jazzsports. Hovland’s 65 at least kept him in the race a bit heading into Sunday and seems to be getting better in each tournament he has played lately as he has finished first in three of his last six starts worldwide, the last one coming at the Dubai Desert Classic, where he started the day six back of the lead. Of course, it will take a historic scoring day for Hovland and an epic collapse from Niemann for Hovland to win this, but that’s what will make Sunday so fun to watch.

After Round 3 at the 2022 Genesis Invitational, Joaquin Niewmann remains the favorite, as projected by Jazzsports.

Join us to receive our daily Golf content and make sure to stay tuned for Genesis Invitational updates, golf news, and PGA Tour schedule.