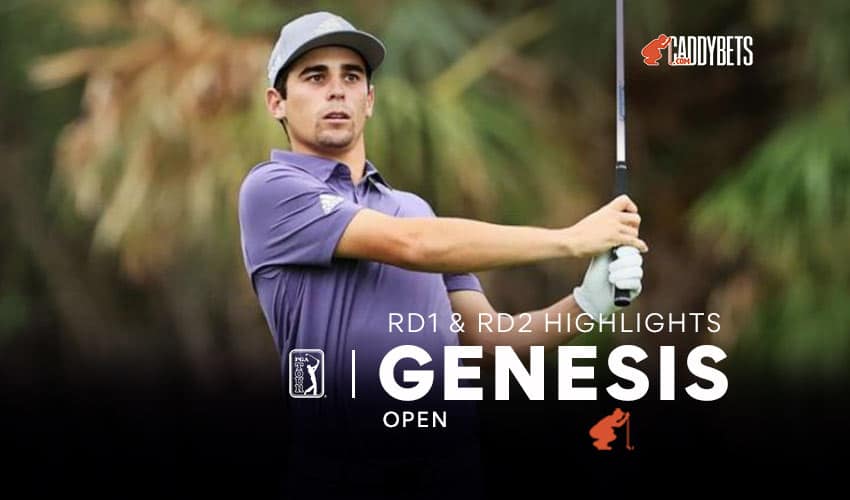 Genesis Invitational Round 1 & Round 2 Highlights

This week, the PGA wraps up the West Coast swing with The Genesis Invitational, which includes a strong field that attracted everyone from the top 10 in the world ranking. This marks the first time in 15 years a regular PGA Tour event has all of the world’s top 10.

Thursday started with high expectations for the Worlds No. 1 Golfer, Jon Rahm, who was inserted as the early favorite to win the 2022 Genesis Invitational. Still, an almost forgotten name led the field by the end of the round.

Joaquin Niemann finished round onethree strokes better than the rest of the field with an 8-under par, and two of those almost came from tee to green. Niemann has always had potential, but Thursday, his play finally rose to that potential and proved to the world how good he could be. Most forget that Niemann is only 23; if he can hang on here at the Riviera, he would catapult himself into the top tier of PGA Tour professionals, but the key for him is consistency. You don’t win a tournament in the first round.

Niemann can’t falter even a little because sitting three strokes back is a star-studded lineup currently tied for second, including Max Homa, Cameron Young, Scottie Scheffler, Jordan Spieth, all a 5-under for the day.

If there was any doubt that Joaquin Niemann could keep up his torrid pace from round one, Niemann answered those questions right away on Friday by hitting 6-iron to 4 feet for eagle on the first hole, followed with a birdie, and wound up with another 63. Niemann is at 16-under after two rounds and has been inserted as the favorite with -110 odds to win it all.

In fact, Niemann broke a course record with his play, a record that stood for all of 20 minutes, which was set by Cameron Young, a 24-year-old PGA Tour rookie who birdied his last four holes for a 62. Young sits two strokes behind Niemann at 14-under par and has increased his odds to win the tournament to +650.

Sitting right behind Young is Justin Thomas, who, after round two, sits at 11-under and actually has better odds to win the tournament at +330 than Young.

I’ll admit it; I was one of the people who thought Niemann’s round one was nice but not sustainable… I was wrong, and I’m jumping on the Joaquin Niemann bandwagon to win the 2022 Genesis Invitational. After what I saw on Friday, Niemann should cruise to victory here at the Riviera on Sunday.

After Round 2 at the 2022 Genesis Invitational, Joaquin Niewmann has been inserted as the favorite

Join us to receive our daily Golf content and make sure to stay tuned for Genesis Invitational updates, golf news, and PGA Tour schedule.