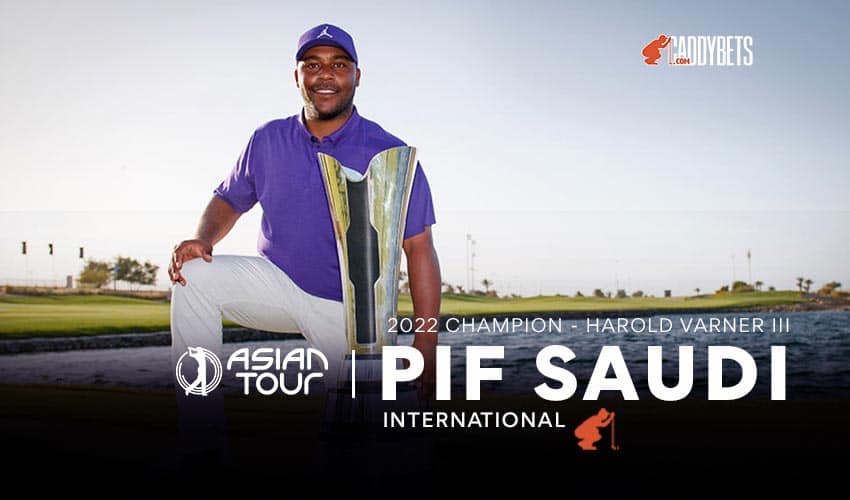 Harold Varner III, one of the less-heralded PGA Tour professionals playing in Saudi Arabia this week, hit what is very likely the biggest putt of his life on Sunday, recording an eagle on the 18th hole at the Royal Greens Golf and Country Club after sinking a 120-foot putt from the fringe.

The miraculous putt came at a great time for Varner, as the eagle jumped Bubba Watson on the leaderboard and gave the 31-year-old who came into this event at No. 99 in the Official World Golf Ranking a one-stroke victory in this event—the crown jewel of the Asian Tour—and the second pro victory for Varner (2016 Australian PGA Championship on the European Tour).

Watson, who trailed leader Harold Varner III by four strokes going into the final day of the event, actually recorded an eagle of his own on the par-5 18th, shooting a 64 in the final round to end up with a 12-under 268 for the tournament.

After a solid drive, Varner’s second shot landed on the fringe of the green but 120 feet from where it needed to be. Trailing by a stroke going into the hole, Varner would need a two-putt birdie to reach a playoff with Watson.

But instead of hitting his third shot close to the cup to give himself a manageable birdie try, the ball kept rolling and rolling the length of the long green by the water on a windy day—until it dropped into the hole.

Varner’s caddie jumped into his arms as the pair celebrated the “walk-off” win with Varner finishing at a 13-under 269 after shooting a 69 on Sunday.

The putt secured a $1 million payday—the largest in Varner’s career—as he became the third-ever winner of this event, behind Dustin Johnson (twice) and Graeme McDowell.

“I’m just trying to take it in, still in a bit of disbelief after sinking that putt. “Winning just never gets old. I just know that there’s been times where it just didn’t go my way and today it did. I’m super thrilled not just for myself, but everyone that’s either on my team or in my corner.”

It wasn’t looking promising for Varner after a double bogey on 14 and a bogey on the par-3 16th, but Varner remained in the moment and kept his confidence.

“I walk up to 17, and we’re tied. We have to wait until they get off the green. While we’re on the tee, I see he goes to 12, so I’m like, damn, all right, so I’m two back,” Varner said. “I’m like, just get something up there, give myself a chance to make birdie. 18, you know, obviously anything can happen. I just never doubted myself.”

For his part, Watson wasn’t upset about being on the losing end of such an improbable moment. Preparing for a playoff, Watson instead went to the green to congratulate Varner on his amazing victory.

“I’m not mad at him for beating me,” said Watson. “I’m happy for him. He’s a dear friend of mine, and I applaud him. I love seeing that. I cheer for him.”

It was a fine outing for Watson, who was playing for the first time since The Northern Trust in August, where he missed the cut and failed to advance further in the FedEx Cup playoffs. It was his best finish since a fourth place at the ZOZO Championship in 2020, and his last win came at the 2018 Travelers Championship. Watson earned $525,000 for the runner-up finish.

Harold Varner III jumped up to No. 46 in the world rankings with the win

He was 44th in the final FedEx Cup standings last year, reaching the BMW Championship but failing to qualify for the Tour Championship. He had a career-best runner-up finish on the PGA Tour last May at the RBC Heritage. This season, his best finish was 11th at the Sanderson Farms Championship, and he was 22nd in his last PGA Tour event—The American Express two weeks ago in California.

“I’m super thrilled not just for myself, but everyone that’s either on my team or in my corner,” Varner added.

Spaniard Adri Arnaus started the day one shot behind Varner but his 71 saw him finish at 10-under for sole possession of third place. Australian Cameron Smith, who won a PGA Tour event in Hawaii last month, was tied for fourth place with Steve Lewton.

Matthew Wolf and Pablo Larrazabal tied for sixth at 8-under while defending champion Dustin Johnson was among a group tied for eighth at 7-under. Johnson was one shot off the lead after an opening-round 65, but two of his next three rounds in the 70s prevented a chance for a third title. Johnson was tied with Abraham Ancer, Tommy Fleetwood, Jhonattan Vegas, Joaquin Niemann, and Ryosuke Kinoshita for eighth place.

More PGA Tour stars were further down the list, including Phil Mickelson tied for 18th at -4 with Olympic gold medalist Xander Schauffele. Tyrrell Hatton, one of the pre-tournament favorites, was tied for 28th at 1-under with Tony Finau.

Graeme McDowell, the 2020 champion, failed to make the cut. Also, Bryson DeChambeau’s struggles continued, as he withdrew after shooting at 73 in the opening round.

DeChambeau, who missed the cut at the Farmers Insurance Open on the PGA Tour the week prior, didn’t speak to the media after the event but cited hand and hip injuries as his reason for withdrawing.

All week, a hot topic on the course was the special series that the Asian Tour will be embarking on with Greg Norman as the face of the league that’s funded by the Saudi-baked LIV Golf Investments group. Mickelson said that “pretty much every player in the top 100 in the world has been contacted” about participating in the league.

The PGA Tour, which gave players special exemptions to play in the Saudi International instead of at the AT&T Pro Am at Pebble Beach, has threatened golfers who join a rival league with a lifetime ban on their events.

Get the latest, golf news, and PGA Tour schedule. Sign up to receive our daily Golf content and become a winner.

Follow us on Social Media for golf odds and Harold Varner III updates!