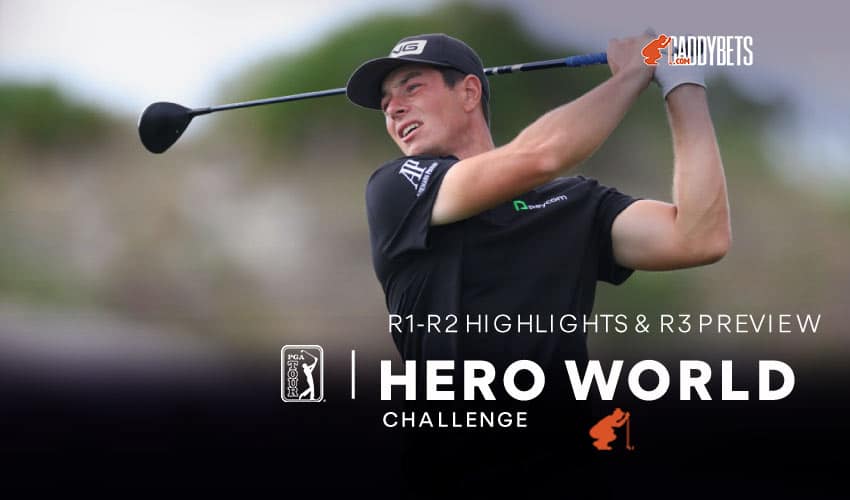 Through two rounds of the Hero World Challenge 2022, it is the defending champion Viktor Hovland who leads the field.

The big hitting Norwegian leads by only one stroke but has a host of top names looking to overhaul his lead heading into today’s third round. Collin Morikawa, Scottie Scheffler, Cameron Young and Xander Schauffele will all start just one shot behind and will be confident of making a significant move. Scheffler has the added incentive of knowing that a win this weekend will see him regain his world number one ranking, something he has recently lost to Rory McIlroy.

Hovland picks up where he left off

After his win in this event last year, Hovland has carried on where he left off and has been in the lead since the first round. He clearly has a liking for the Bermudan links and an assured first round of 69, which included a stunning eagle on the par 14th saw him end the first round with the lead.

Yesterday’s second round saw the wind stiffen and it provided a true test for the entire twenty-man field. Initially it looked like Hovland was struggling as he dropped shots on his second and fourth holes. However, showing clear signs of confidence – Hovland responded emphatically with an eagle on the 6th and three birdies in succession on the 13th, 14th, and 15th holes. A dropped shot on 16th blotted his card slightly, but he will be happy with his first two rounds.

If Hovland is to defend his title, he will have to be at his very best as the field is absolutely loaded behind him. Ten players will start today’s third round within five strokes of the lead and as well as the four players who will start the day one stroke behind, South Korean sensation Tom Kim finds himself only two behind, Justin Thomas is a shot further back on -2 and it would be foolish to dismiss the chances of former world number 1 Jon Rahm who despite being five off the pace will be looking for a fast and furious start to his round.

So where does this leave the betting? Our partners Jazz Sports have provided odds ahead of today’s third round and there is plenty of value that can be found.

Currently leading the betting is Scottie Scheffler who is looking to end his 2022 on a real high. Scheffler has no made secret of how disappointed he is to have lost his number one ranking and is clearly motivated to grab it back.

Clearly hitting the ball well, Scheffler produced one of the rounds of the day yesterday shooting a -4, 68 to propel himself right into contention. Anything close to that today, will see him right in the thick of things.

Hovland will start the day as the second favorite and for the Norwegian to win this tournament again he will have to be mindful of not dropping any silly shots like he did yesterday.

Rounding out the top three in the betting is Xander Schauffele who will be looking for his third title of 2022. There have been rumors linking Schauffele to LIV Golf and whilst those rumors haven’t been denied, he clearly isn’t letting that impact his golf.

Like Scheffler, Schauffele produced a stunning round of 68 yesterday. Schauffele scored five birdies in his closing twelve holes and if he can continue that momentum today, he will be a hard man to stop.

The undisputed value of the day looks to be between Cameron Young and Collin Morikawa. Young was recently named PGA Tour Rookie of the Year and despite a fine year is still looking for his first title, it wouldn’t be a surprise to anyone if it were to arrive here.

Morikawa has had a poor year by his own admission and the American hot shot has clearly been looking for a spark. A change of clubs heading into the week looks like it has done the trick and it will be fascinating to see how he competes over the course of the weekend.

Sign up here to get a 50% Sports Welcome Bonus and get the latest Golf Gambling Odds by Jazzsports.