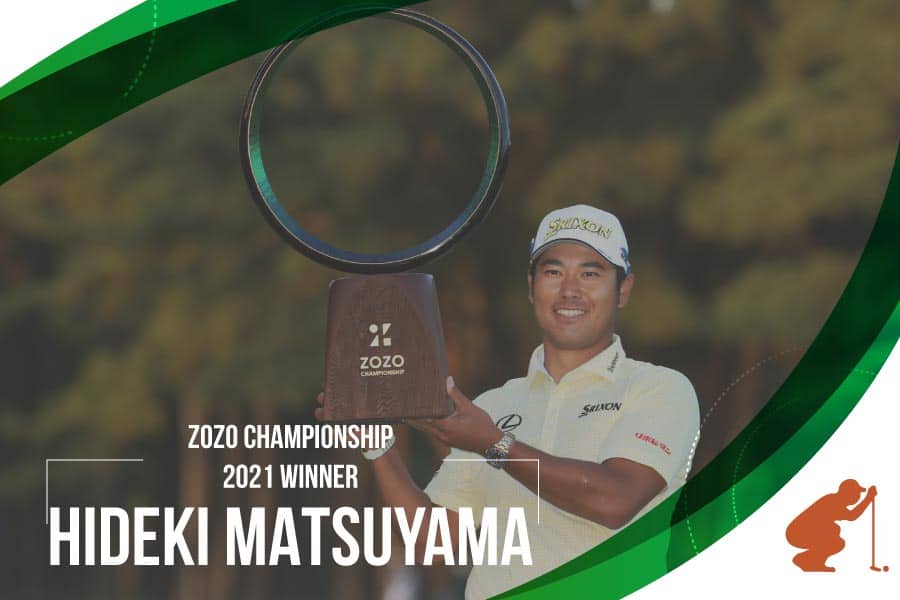 Hideki Matsuyama redeemed himself after missing out on a bronze medal the last time he played in Japan by missing a putt on the final hole and then losing in a seven-way playoff at the Tokyo Olympics. This time, he ended his final round with an exclamation point by recording an eagle on the 72nd hole to run away with the PGA Tour and Japan Tour’s ZOZO Championship by five strokes over Brendan Steele and Cameron Tringale at the Narashino Country Club in Chiba—about an hour outside Tokyo.

Despite the wide margin of victory, much of the final round featured a tight leaderboard. After leading for periods on Sunday, Tringale was two shots behind Matsuyama going into the final hole. But the American bogeyed No. 18, while Matsuyama hit a 3-wood with his second shot to within about 12 feet of the pin, and he sank the putt for eagle to finish the tournament at a 15-under 265..

“Probably my second shot on 18; that was probably the clincher,” Matsuyama said when asked when he thought he had the victory in his grasp.

Matsuyama becomes the first native of Japan to win a PGA Tour tournament on his home soil in just the second officially sanctioned tournament held in Japan. The 2019 ZOZO Championship was the first, won by Tiger Woods with Matsuyama finishing second. The 2020 version of this event was played in California due to travel restrictions related to the COVID-19 pandemic.

It’s the second historic win from the 29-year-old this year, as he became the first Japanese player to win a men’s major in April at the Masters, bookending a satisfying year for the man now third in the FedEx Cup standings for 2021-22.

“It was one of my biggest goals to win in front of the Japanese fans here in this country as well, so [I’m] happy that I’ll be able to accomplish that. Also, in 2019 Tiger won the Masters and went on to win the ZOZO Championship, so I’m glad that I would be able to emulate that as well.”

After Hideki Matsuyama finished sixth in the season-opening Fortinet Championship last month, he struggled in his last two starts, finishing outside the top 50 in both events in Las Vegas over the past two weeks.

After arriving in Japan, the now seven-time winner on the PGA Tour said that his game was not close to the level it needed to be to compete here.

“If my game scored a 10 out of 10 at the Masters, now I would say it scores less than one,” Matsuyama said before the tournament started. “I will be struggling this week, but I am here in Japan, so I am motivated to be in contention.”

Matsuyama started strong with a six-under 64 and then shot back-to-back 68s to lead by one over Tringale going into the final round. He said that his game still wasn’t at an elite level this weekend, but the motivation provided by the fans willed him to the victory.

“I would rate my performance as two or three. A factor that was going for me was the fans rooting for me and they were behind me,” Matsuyama explained. “On the driving range, my balls were all over and not consistent. But once at the golf course, I was able to feed off the energy of the crowd.”

After five-straight pars to open his final round, Matsuyama eagled the par-5 sixth hole, but a bogey on No. 8, coupled with birdies on Nos. 8 and 9 by Tringale put the American in the lead by one at the turn, as he sought his first PGA Tour win in over 300 starts. But Matsuyama sprinkled in three birdies at the start of the back nine and ended up leading by two going into the final hole.

Tringale was happy with his tournament—outside of bogeys on Nos. 17 and 18—but he said afterwards that the home-country player was just too clutch playing in front of the cheering fans.

“To really slam the door and hit an incredible second shot [on 18] and hold the putt—it was storybook,” Tringale said. “He seemed a little off, just based off watching his reactions to shots, but he hung in there. The crowd loved him.”

Matsuyama also became the first golfer since Phil Mickelson at the PGA Championship in May to win a tournament after leading at the 54-hole mark. Patrick Cantlay accomplished the feat at the Tour Championship, but he did so with the benefit of starting strokes that were assigned before the event started.

How the Rest of the Field Fared

With this tournament the only sanctioned event in Asia on the schedule and sandwiched between events in Las Vegas and Bermuda, only three of the top-20 golfers in the Official World Golf Rankings participated here.

The other two were two Americans with Japanese heritage. The Open Championship winner and runner-up at last week’s CJ Cup Collin Morikawa finished tied for seventh at 5-under, and 2020 Olympic gold medalist Xander Schauffele finished at even par (tied for 28th) after back-to-back 68s over the weekend helped erase a 74 on Friday.

Steele had a 66 on Sunday to tie Tringale for runner-up after the latter bogeyed the final two holes. They were four shots ahead of fourth-place finishers Mackenzie Hughes, Matt Wallace, and Sebastian Munoz, who all finished at 6-under.

Rickie Fowler, as contending for the win last week, finished the tournament here with back-to-back 71s to finish +3 for the tournament.

How Did the Oddsmakers Do?

Morikawa and Schauffele were the overwhelming favorites at +600 and +650, respectively, at Jazz Sports. Matsuyama was next at +1400, as bettors earned a decent payout on the hometown favorite.

The Tour heads back across the continental United States and lands in Bermuda for the Butterfield Bermuda Championship at Port Royal Golf course in Southampton. Matthew Fitzpatrick is the early favorite at +1000.