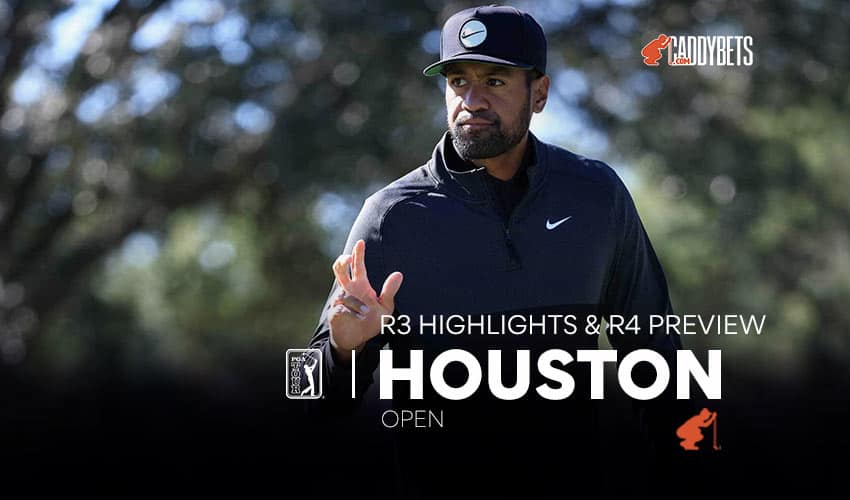 Tony Finau maintained his lead at the top of the Houston Open leaderboard. This happen after an eventful third round played in tough conditions. Now, it is time to start the round with a four-stroke lead. Check our Houston Open Round 4 Preview and prediction.

Finau is looking for his 5th PGA Tour Title and third in the last five months. Starting the day knowing that this was his tournament to lose, Finau played excellent front-running golf.

Expertly keeping his ball out of trouble, Finau played solid from tee to green and knocked in the crucial putts when he had to. Ending his eighteen holes with a superb -2, 68. Tony knows that anything close to a repeat of that performance will see him end the day victorious.

Ben Taylor and Justin Rose are in pursuit

Despite Finau appearing to hold a comfortable lead. However, that advantage was briefly threatened by a superb display from Englishman Ben Taylor. Ranked 226 in the world, Taylor produced a performance that belied his status.

Three birdies on his front nine were matched with three more on the back nine, and a dropped shot on the twelfth hole spoilt his card but an excellent round of 65 will see him start today in the final pairing for the first time in his career.

There have been many reports that Justin Rose is thinking about leaving the PGA Tour to join up with the LIV Tour but yesterday he showed that his mind was fully focused on trying to win yet another title.

Rose’s round of 66, was up there with one of the best of the day and saw the Englishman vault all the way into the top 5. If Finau falters under the pressure, Rose will be hoping to use all of his experience to put himself into the final reckoning.

The American duo of Wyndham Clark and Tyson Alexander round out the top 5 and both will start the day seven strokes off Finau’s lead. Both have played well over the first three days and will be hoping for something truly special in today’s final round.

Houston Open Round 4 Preview and Odds

All odds courtesy of JazzSports

Tony Finau arrives as the favorite

Heading into today’s final round it isn’t a surprise to see that Tony Finau is the undoubted favorite for victory – odds of -1000 would suggest that this tournament is over, however, we know golf isn’t as simple as that!

Finau over the last two days has had his golf ball under complete control and he will head into today’s final round knowing that par golf should be good enough for another tournament victory.

The best alternative to Finau could be Ben Taylor. Taylor heads into today’s final round after shooting the best round of the day yesterday. He has never found himself in this position before. It will be interesting to see how the Englishman handles the pressure.

One man used to the pressure is Justin Rose. If Finau shows any signs of weakness look for the former FedEx champion to pounce.

Follow us on Social Media for more Houston Open information and Highlights!