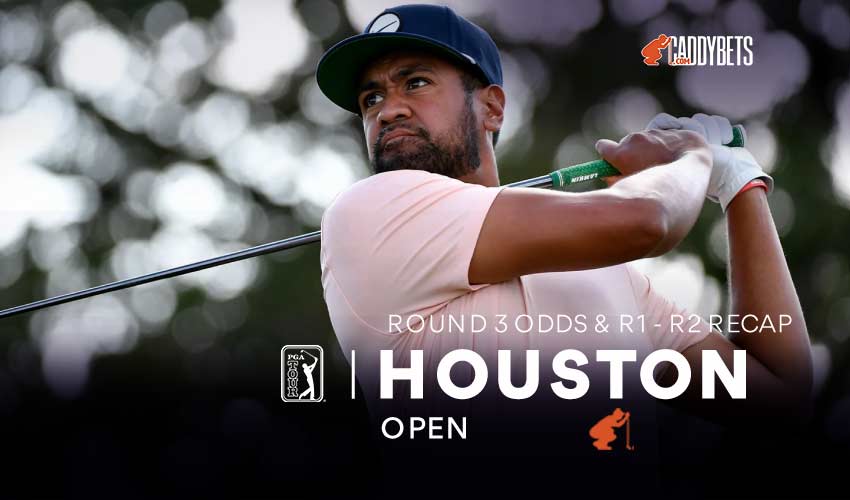 This year’s Houston Open has heavily been impacted by indifferent weather with many players still to complete their second rounds. Despite the tournament being in a state of flux, there is no doubt as to who will be leading heading into today’s third round. Here our Houston Open Rounds 1&2 Recap

Tony Finau currently sits atop of the leaderboard on -13 and leads by four strokes. Finau is one of the lucky players who has completed his second round, and although several of his rivals still need to finish,  it is likely that he will start today’s third round with several strokes in hand.

Heading into the week as one of the highest ranked players in the field, Finau showed all of his class during his second round. Showing his unbelievable ball striking ability, Finau was dialled in with both his driver and irons and converted his opportunities on his way to a stunning -8, 62.

Patrick Rodgers finds himself sitting in second place following a -7, 63 and is another who was able to complete his second round.

He bought mixed form into the week with a string of down the field efforts coupled with a solid third place finish at the Bermuda Championship just a few weeks ago.  Rodgers is yet to win on Tour but did manage three top ten finishes last season. With a four shot deficit to make up he will be hoping to play some superb golf over the weekend.

Alex Noren will be hoping to bag himself a spot on Team Europe in next year’s Ryder Cup and the Swede currently finds himself five shots off the pace. Noren still has three holes to play of his second round and will be hoping he can make a few last gasp birdies to put himself into today’s final pairing.

One name to keep an eye on is Scottie Scheffler. The Masters Champion still has five holes to complete of round 2 and finds himself eight strokes behind his Presidents Cup teammate. He will be hoping that playing in front of a home crowd can help propel him up the leaderboard further.

Due to his strong position at the top of the leaderboard it isn’t a surprise to see that Tony Finau is the overwhelming favourite for victory this weekend. Priced at -150,  it will take something special to dislodge the American from the top spot and it’s certainly Finau’s tournament to lose.

With Finau so far in front, there is some terrific value to be found elsewhere in the field.

Scottie Scheffler has some work to do in his second round if he is to make a dent into Finau’s lead, however Scheffler has proved that he has the game to score low. Playing in his home state, he could be the value play of the tournament.

Alex Noren is a former winner on Tour but has gone several years without a title. He will be hoping to start a birdie charge when his round resumes today and could be one to watch out for.

At a decent price Aaron Wise could be worth a small play. Wise is quietly establishing himself as one of the most consistent players on Tour and will be hoping for a big weekend. He will start the day eight strokes off Finau but still has five second round holes to play.

Another at a price who could make a weekend run is Trey Mullinax. A huge hitter, Mullinax made his breakthrough at last season’s Barbasol and he has the capabilities for another win this weekend.

So, do you have a favorite to bet now? Sign up here to get a 50% Sports Welcome Bonus and get the latest Golf Betting Odds by Jazzsports.