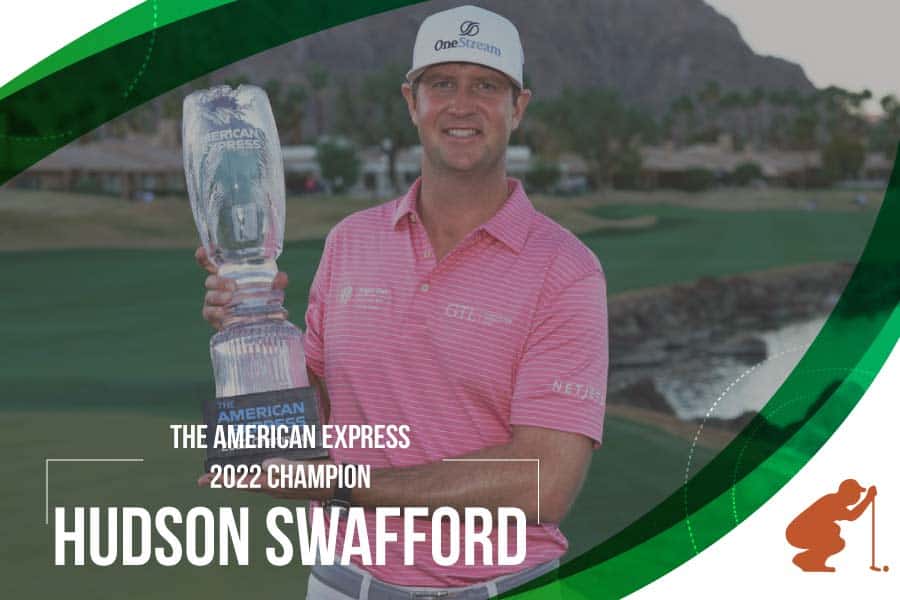 Sure, Hudson Swafford won this event in 2017 and had another PGA Tour win to his credit in the fall of 2020, but there wasn’t much after that to lead one to believe that he would be in line for another victory at PGA West this weekend.

Swafford, who made 12 cuts in 29 starts in the 2021 FedEx Cup season and then didn’t have a finish of higher than 32nd in official starts this season, rallied from three shots back to start the final round of The American Express to win the tournament by two strokes over Tom Hoge. Hudson Swafford shot a 62 at the Stadium Course in La Quinta to finish the tournament at 23-under par. He really turned it on for the back nine, shooting a 31 that consisted of five birdies, two bogeys, and an eagle on the par-5 16th that put him in the lead for good.

All that despite an inauspicious start with a bogey on the first hole. Ironically, however, Swafford opened his winning-round here in 2017 the same way, which gave him a good feeling.

It was an emotional win for Swafford

Who lost his father last month at the age of 83. His father taught him how to golf and remained at his side on the PGA Tour until he was no longer able to for health reasons.

“His birthday was this week, so I know he was following and watching, and to get it done—it was awesome,” Hudson Swafford explained.

Rookie Lee Hodges led after the third round, but he settled for a tie for third after shooting a 70 on Sunday. He struggled on the Stadium Course, going a combined -2 under in two rounds on Pete Dye’s creation, while scoring -18 on the event’s two other courses.

It was a top-10 filled with underdogs, as none of the top 10 entered the day higher than 34th in the FedEx Cup standings (Hoge). Patrick Cantlay, who finished ninth, was the only golfer in the top 35 of the Official World Golf Rankings to place in the top 10.

Hoge was runner up with a -21. Tied with Hodges at -20 was Brian Harman and Lanto Griffin.

Will Zalatoris tied for sixth place with Denny McCarthy and 2018 Open Championship winner Francesco Monilari. Cantlay was in ninth at 18-under, and Paul Barjon of France finished 10th.

World’s No. 1 golfer Jon Rahm tied for 14th at 14-under, tied with Seamus Power, who was in fourth place entering Sunday and was in contention all tournament before shooting a +2 in the final round.

The PGA Tour remains in California next week for the Farmers Insurance Open at Torrey Pines. Patrick Reed is the defending champion, and he will have to contend with six of the world’s top-10 golfers in the field, including Hideki Matsuyama, who won the Sony Open in Hawaii last week and leads the FedEx Cup standings.

Join us to receive our daily Golf content and make sure to stay tuned for Patrick Cantlay updates, golf news, and PGA Tour schedule.