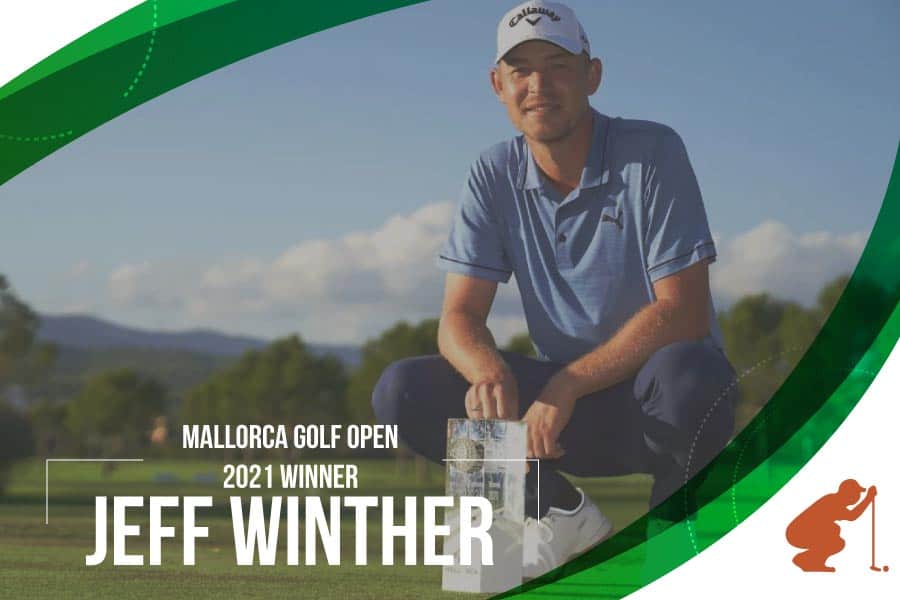 Jeff Winther’s first-career win on the European Tour was certainly a memorable one—both on and off the course.

Winther, a 33-year-old native of Denmark, led going into the final round of the Mallorca Open but ended up getting locked in the bathroom in his hotel on Sunday morning, nearly missing his tee time.

Winther was able to get his 6-year-old daughter to summon help from the reception desk, and a crew came to break down the stuck door to free the tournament leader and his wife. Winther said there was no lock on the door, but the handle broke, trapping the two in there.

“Our little girl, Nora, had to go and find guys at reception to break down the door,” Jeff Winther recalled after his final round. “We were in there for 45 minutes, I think. I thought, ‘Geez, not today, not Sunday, you’re leading the freaking event. Might not get there for your tee time.’ What a morning.”

After that ordeal, holding onto a lead on the Sunday of a European Tour event may not have been that pressure-packed.

“I think it probably settled the nerves because I thought I might miss my tee time and thought I might not get out. The kids are in the living room, six and two years old, what can you do?”

Winther shot even par on a blustery day on the Balearic Islands to record a 15-under 265 and won the tournament by one stroke over Sebastian Soderberg and Spaniards Pep Angles and Jorge Campillo.

“It’s unbelievable—it’s not sinking in. I couldn’t have a better week. I’m overwhelmed,” Winther said after bringing his family along so they could enjoy a vacation. “I said at the start of the week that this was going to be like a holiday, and apparently, holidays work out for me.”

Winther took advantage of pleasant conditions during rounds one and three to shoot a 62 on both days. Friday was a bit windy, resulting in a 1-over 71, and he was able to muster even par on Sunday.

After a clean front nine where he parred every hole, Jeff Winther started the back nine with a birdie on 10. He then rattled off seven more pars before playing 18 safe with a bogey for the one-stroke tournament victory. Despite all the pars, it doesn’t mean that his round was without drama. On the third hole, Winther’s second shot landed by a tree. But he took his third shot left-handed and stuck it around 20 feet from the hole, and he then sunk the putt to save par.

Winther has played well in Spain, carding his other 62 this year at the Gran Canaria Lopesan Open, and five of his eight lowest European Tour rounds have come in Spain. He did not have the results the last two weeks in the Spanish swing, however, as he missed the cut at the Open de Espana and finished tied for 56th at the Andalucia Masters. But he’s now in 37th place in the Race to Dubai standings (after jumping up 47 spots with the win) and is currently within the top 50 to qualify for the DP World Tour Championship, Dubai next month with two more events on the schedule until the 2021 European Tour finale.

Soderberg was in the final pairing with Jeff Winther and was tied for much of the round, but bogeys at Nos. 13 and 15 put him two strokes off the lead. His drive on No. 16 found water, but he was able to save par after an incredible approach shot. But pars on Nos. 17 and 18 left him unable to gain enough ground to force a playoff. The Swede, however, is climbing the Race to Dubai standings fast after his second-straight runner-up finish. He’s now 60th in the standings after rising 23 spots this week with two events left.

Angles and Campillo were the best bets for home-country wins, but each fell one stroke short. Angles shot a 67 on Sunday to close within one shot of the leader, birdieing Nos. 11 and 15 on the back nine before finishing with three-straight pars. Campillo also birdied two on the back nine and finished with four-straight pars—the windy conditions leaving the golfers unable to make up ground in the final few holes to force a playoff.

Laurie Canter finished tied for fifth after shooting a 64, which was the low score of the day. He shot a 31 on the back nine, which included an eagle on the par-4 17th and then a birdie on 18 to finish strong after he had a rough Sunday last week in losing the lead at the Andalucia Masters. It’s Canter’s second-straight top-five finish, and he was also tied for runner-up at the BMW PGA Championship last month, so he’s on a hot streak heading down the stretch of the season. Sebastian Garcia Rodriguez, another Spaniard, was tied with Canter for fifth at -12. Four golfers were tied for seventh at -10—Andrew Johnston, Niklas Lemke, Jack Senior, and Bryce Easton.

The European Tour is off this week before playing the Portugal Masters to open November. The week after that is the AVIV Dubai Championship. At that point, the field will be set for the DP World Tour Championship, Dubai, featuring the top-50 in the Race to Dubai standings.

The top-five stem mostly from co-sanctioned events, as The Open Championship winner Collin Morikawa leads the standings, followed by BMW PGA Championship winner Billy Horschel. World’s No. 1-ranked golfer Jon Rahm is third and said after missing the cut last week that he will not be playing in any more events until the finale in Dubai. Englishmen Tyrrell Hatton and Matt Fitzpatrick round out the top five.

Closer to the top-50 cutline, Americans Patrick Reed and John Catlin sit 46th and 47th, respectively, and former major winner Martin Kaymer is 45th. Maximillian Kieffer is at No. 50, the final transfer spot, and Sam Horsfield is 53rd. Soderberg, one of the hottest golfers on tour at the moment, is 60th but rising fast. Campillo also jumped 24 spots to 86th with his runner-up finish this week.