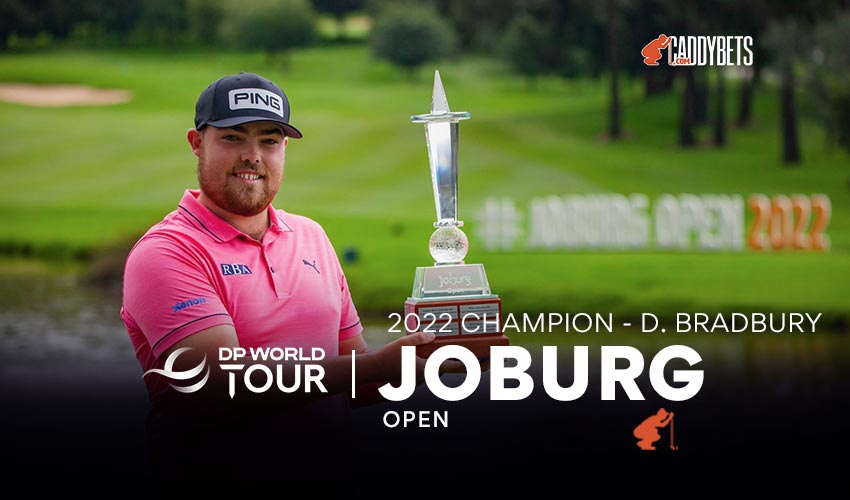 For the second year in a row, a major longshot won the Joburg Open 2022.

In 2021, Thriston Lawrence won the shortened event at 200-1, and rookie Dan Bradbury—opening at 250-1 last week—started with a 63 on Thursday and didn’t let up to win a DP World Tour event in just his third start after turning pro over the summer.

Coming into this event on a sponsors exemption, the Englishman Bradbury made the most of his opportunity at Houghton Golf Club in Johannesburg, South Africa, starting the final round with a one-shot lead over Sami Valimaki and playing calm under pressure, shooting a 4-under 67 to win the tournament by three strokes over the Finn.

“It’s just a lot of pressure taken off your back – that’s nice – but it hasn’t sunk in yet and I don’t think it will for a while,” Bradbury said after the improbable win. “I was a bit worried there on the 15th when Valimaki rolled that monster in but it was kind of the same thing all week, just keep playing my own game and I knew I was playing good enough.”

The key moment for Bradbury in a round where he had five birdies through 17 holes was a chip-in for par on hole No. 6. His lone bogey of the day came on No. 18, finishing at -21 for the tournament. It was incredible poise for a rookie going into a tournament as the leader on the final day.

“I wasn’t as bad [with nerves] as I thought I was going to be. Before the round, I was a little bit worse. Once we got going and started nice, it settled the nerves,” Bradbury explained.

With the win, Bradbury, 23, has a two-year exemption on the DP World Tour and qualified for the 151st Open Championship at Royal Liverpool. All thanks to a sponsor’s exemption, in which he remains grateful to have received.

“It means the world, I wouldn’t be stood here without it. I wouldn’t have anywhere to play this year really without it. It’s been life-changing now. So hopefully I make the most of it,” Bradbury said.

Valimaki and Christiaan Bezuidenhout, who finished third, also qualified for the Open Championship due to their result atop the leaderboard. Bezuidenhout led a South African contingent of six countrymen who finished tied for ninth or better, including Daniel Van Tonder (tied for third), Louis De Jager (fifth), Heinrich Bruiners and J.J. Senekan (tied for sixth), and Casey Jarvis (tied for ninth).

Other local favorites finished a bit lower in the leaderboard: Oliver Bekker was tied for 13th while defending champion Thriston Lawrence tied for 33rd with Hennie Du Plessis and others. Lawrence started the tournament with a 66, but back-to-back 73s derailed his effort to repeat.

The DP World Tour holds two events next weekend. Many of these same players will remain in Johannesburg to compete in the South African Open at Blair Atholl Golf & Equestrian Estate, including Bradbury along with Adrian Otaegui and Dean Burmester. Others, including Adrian Meronk and Nicolai and Rasmus Hojgaard, will take part in the ISPS HANDA Australian Open at Victoria Golf Club in Melbourne.

Follow us on Social Media for more Joburg Open 2022 News!