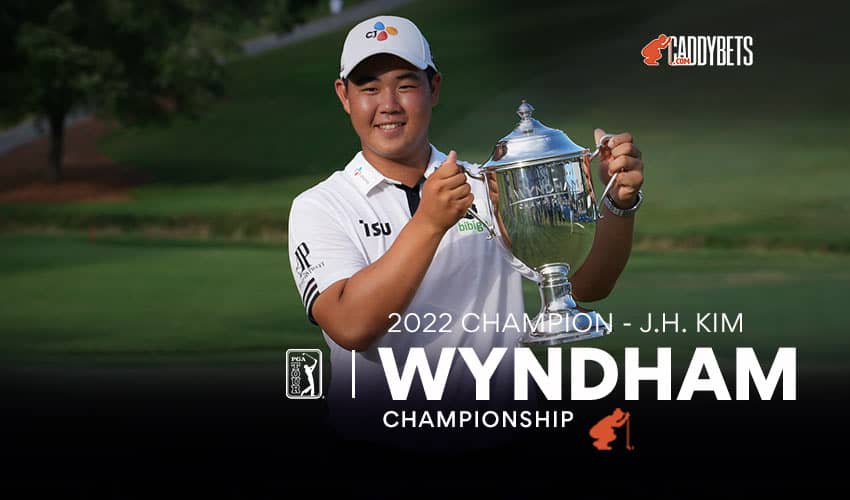 It was an all-or-nothing scenario for 20-year-old Joohyung Kim this weekend at the 2022 Wyndham Championship: win the tournament and qualify for the FedEx Cup playoffs or head home after an amazing run but not reaching the playoffs due to not having full PGA Tour status.

After shooting a quadruple-bogey 8 on the opening hole of the tournament on Thursday, no one could’ve imagined that Kim would prevail 71 holes later, but that’s exactly what he did.

Fellow South Korean Sungjae Im led Kim by two strokes going into the final round, but after a par on the first hole, Kim knocked in eight-straight birdies to card a 27 on the front nine, tying Brandt Snedeker’s record at Sedgefield Golf Club in Greensboro, North Carolina.

Kim bogeyed 10 but played at -2 the rest of the way to end up with a 61 and leaving Im in the dust—winning the tournament by five strokes over Im and John Huh.

Kim became the first player born in the 2000s to win on the PGA Tour. He’s 34th in the FedEx Cup standings and is in a decent position going into the FedEx St. Jude Championship this weekend.

In addition, he has his sights set on making the international team of the Presidents Cup.

“Hopefully, this gives me a close chance to make that team,” said Kim.

The man that Kim needs to impress—international team captain Trevor Immelman—definitely liked what he saw this weekend.

“Isn’t it nuts?” Immelman said. “It’s crazy to even think about the fact that John Huh shoots 61 on Thursday morning and Tom starts his round with the quad. So, he’s 14 behind after his first hole. … It just goes to show how brilliantly he’s played.”

Kim won the tournament at -20, followed by Im and Huh at 15-under. Ben Griffin was fourth at -14, and tied for fifth at -13 were Russell Henley, Taylor Moore, and Max McGreevy. The latter of which moved up from No. 126 in the FedEx Cup standings to 107, firmly in the field in Memphis now.

“I wasn’t trying to get a certain amount of points or finish top 30 or something like that,” McGreevy said. “I haven’t played good golf in a long time, so I was just trying to play good golf and I thought it could take care of itself.”

Rickie Fowler was the final golfer to make it into the playoffs. Matt Wallace ended up missing out due to Kim becoming eligible with his win.

The first round of the playoffs takes place at TPC Southwind in Memphis this week. Abraham Ancer won this event—which was not a part of the playoffs—last year, but he’s currently not eligible to participate due to his joining the LIV Golf tour. Tony Finau won the first playoff event last year, which was The Northern Trust in New Jersey.

Join Us to receive more Joohyung Kim info! Make sure to stay tuned for the latest PGA Golf Odds,