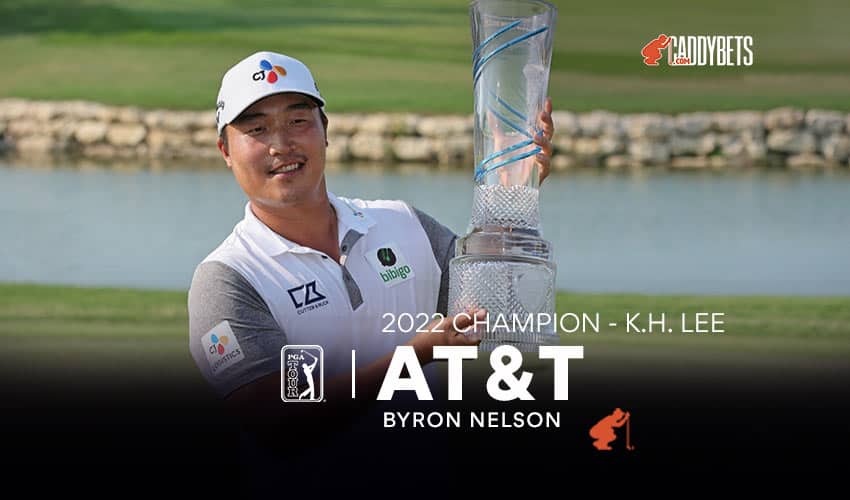 KH Lee set the tournament record to par at the AT&T Byron Nelson last year with a 25-under 263 in the event’s first year at TPC Craig Ranch outside Dallas. This year, Lee birdied the 18th hole to do one better at a 26-under 262, good enough to beat Jordan Spieth by one stroke to win the tournament for the second year in a row.

There’s something about this course that suits Lee because he struggled all year leading up to this event. He was 0-for-3 in April, including a missed cut at the Masters, and had a best finish of 25th in 12 events prior to this one in 2022.

KH Lee was in the top 10 going into the final round, but five birdies on the front nine gave him a chance to successfully defend his title. An eagle on the par-5 12th made it a realistic proposition, and he then reached the green on the par-5 18th in two. His first putt from 24 feet away came within six inches of the cup, and he tapped in for a 63.

Now, Lee hopes to capitalize on the momentum from this win, after he wasn’t able to do so last year.

“Last year, I missed the cut at the PGA Championship, so my first goal is next week [to] play well and hopefully make the cut,” Lee said. “Hopefully, this season will be better than last year.”

Jordan Spieth, playing in his hometown and coming off a win in the RBC Heritage in his last start four weeks ago, birdied 18 as well but it wasn’t enough to win, as four bogeys through the first 10 holes were too much to overcome.

“I would love to win [the Byron Nelson] someday; I had a good chance here,” Spieth said. “[I] grabbed three more birdies, and it wasn’t quite good enough. Good momentum going into next week.”

Spieth struggled a bit this season before the last two events. After missing the cut at the Masters, his only to 156 finish was a runner-up at Pebble Beach. Now, he’s got back-to-back podium finishes and has tons of momentum going into the PGA Championship at Southern Hills, which is the only major he needs for a career grand slam.

Scores were unbelievably low here, as Lee’s 63 wasn’t even the best round of the day. Zander Schauffele shot at 61, and Hideki Matsuyama had a 62. The low round for the tournament was a 60 by Sebastian Munoz on Thursday.

Munoz went into Sunday leading by one over Spieth, but a 3-under 69 sent him into a tie for third with Matsuyama. Schauffele finished tied for fifth with Ryan Palmer and Justin Thomas. Charl Schwartzel was eighth, and Peter Mainati, Davis Riley, and James Hahn finished tied for ninth at -21.

The Tour heads north to Oklahoma for the PGA Championship, the year’s second major, this week. Scheffler and Jon Rahm, who won his last time out at the Mexico Open, are co-favorites. Defending champion Phil Mickelson withdrew from the event late last week.