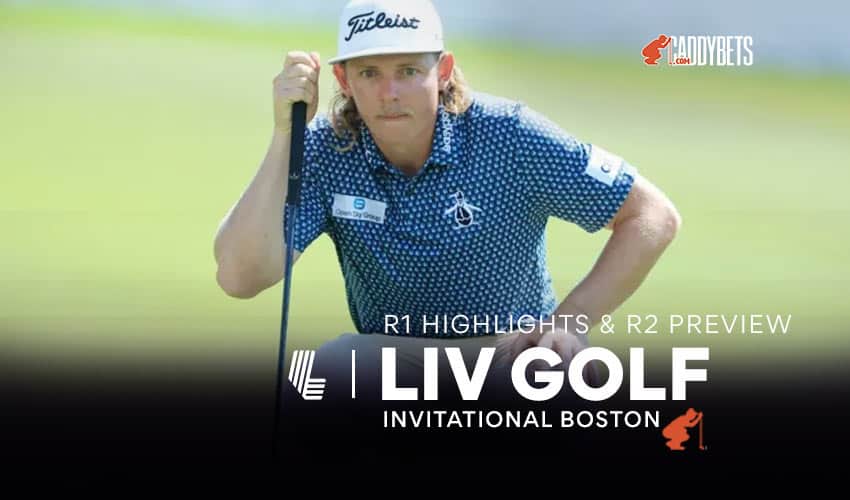 LIV Boston: Round 1 Recap & Round 2 Odds

The fourth tournament of the newly established LIV Tour is here with the 48 man field competing at the International Golf Club in Boston. Here our LIV Boston Betting Preview

LIV has continued to make headlines as it has attracted several top quality players to its ranks, with it being announced earlier in the week that world number 2 and current Open Champion Cameron Smith was their latest high profile recruit.

Smith alongside the likes of Dustin Johnson, Brooks Koepka, Phil Mickelson and Bryson De Chambeau are all teeing it up hoping to win the first place prize of $4,000,000.

With just 54 holes to play, it’s imperative that players start fast if they are to work themselves into contention.

The American pair of Talor Gooch and Matthew Wolff, got their tournaments off to the perfect start and share the lead after one round.

Both lead the way on -7 with Gooch just recording one dropped shot for his first round. Things were a bit more eventful for Wolff, who recorded three bogeys but recovered with an eagle and LIV’s first ever hole in one.

Just behind Gooch and Wolff are two of LIV’s new boys, Joaquin Niemann and Cam Smith.

Both reside just one stroke behind and couldn’t have asked for a better start to their LIV careers.

The signing of Smith is a huge coup for the LIV Tour and he is a player that can certainly move the needle. One of the best putters in the world, Smith showed his prowess with the flat stick by recording two eagles. A double bogey ruined his card, but he is the man to beat ahead of what is sure to be 36 dramatic holes.

Sixteen players sit within four strokes of the lead as we enter the final 36 holes.

Despite sitting just one shot behind the leaders the current tournament favourite is Cam Smith and he can be backed at a nice price of +425. Unlike some of his competitors, Smith arrives in Boston at the top of his game and full of confidence.

Worryingly for the rest of the field he didn’t play to his best but still shot a -6, 64. There should be plenty more to come from the Aussie over the next two days.

Talor Gooch has quickly established himself as one of the best young players in the world. He has a better experience of the format than Smith and played some nice golf in round 1 to put himself at the top of the leaderboard. Odds of +550 look really appealing.

Joaquin Niemann has long been regarded as a talent that has the ability to win multiple majors in his career. Whether he will still get that chance remains to be seen, but his start to his LIV career certainly was impressive and odds of +650 could represent the value play of the day.

South Africans have made a good start to LIV with Charl Schwartzel becoming the first ever tournament winner and Brandon Grace winning the second event. Louis Oosthuizen has struggled this season with a bad back but looked to be swinging the club freely yesterday. He sits three off the lead and odds of +1500 look on the large side.