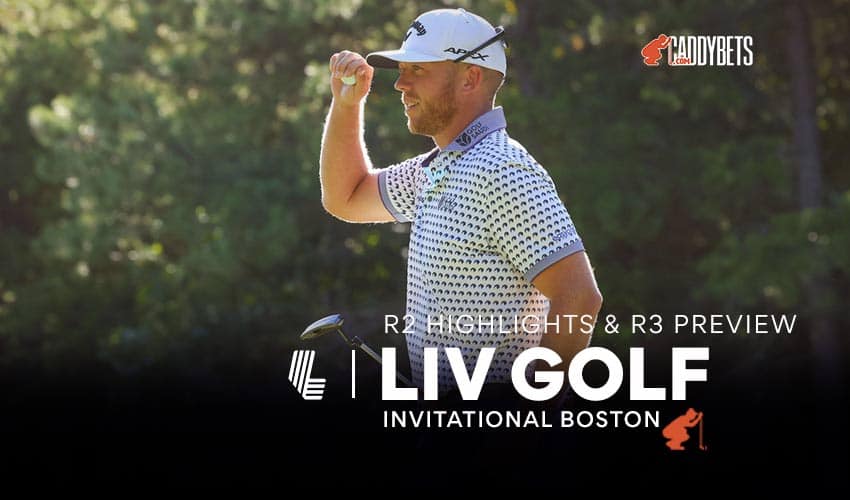 LIV Boston Round 2 Recap & Round 3 Odds

With no PGA Tour action this weekend all eyes are on Boston and the culmination of this week’s LIV tournament. Here is our LIV Boston Round 2 Recap & Round 3 Odds.

After 36 holes the tournament is delicately poised with American Taylor Gooch leading the field by one stroke. Hot on the heels of Taylor are Joaquin Niemann who will start day one behind at -11 and Dustin Johnson who will start two strokes behind at -10.

Gooch has led now through the first two rounds and has notched 14 birdies with just two bogeys.  If he can produce a similar performance here, he could be the man to beat.

Joaquin Niemann has adjusted to life at LIV quickly and similarly to Henrik Stenson he could announce his debut at LIV with a win. The Chilean who has won once on the PGA Tour has long been regarded as a prestigious talent and it’s been easy to see why.

Niemann like Gooch has recorded just two dropped shots across his first 36 holes but is arguably a more talented ball striker than his American counterpart. Niemann has shown he can handle the pressure in the past and he certainly is a contender here.

Dustin Johnson once again showed his class and fired a stunning -7, 63 to fire himself right into contention. Johnson who is yet to win a LIV tournament looks to have been reinvigorated by his new start and his second-round display certainly showed that. If not for two dropped shots in his final four holes, Johnson could well have shared the lead but he will roll into today full of confidence.

Rounding out the top four in the field is another debutante Anribhan Lahiri. A -5, 65 bounced the experienced Indian straight into contention and if he can keep the putter hot he can make up the three-shot deficit he currently faces.

Everything is finely poised for today’s final round, with a host of players still believing they will be in with a chance of victory.

Talor Gooch rightfully starts as the favorite as he holds a one-stroke lead, right on his tail and representing some better value are the pair of Joaquin Nieman and Dustin Johnson.

Anribhan Lahiri represents some real value at +2200 and he could be one of the value plays of the day.

Cameron Smith is no stranger to overturning large final-round deficits and he will start the day five strokes off the lead. The odds of +3000 could represent some terrific value especially if he can get off to a hot start.

Jason Kokrak is another who could be lurking in the field. He will start day four off the lead and on a good day can be an absolute birdie machine. A fierce competitor odds of +3000 could be another value play.

Branden Grace won the second LIV tournament after entering the final round multiple shots behind and he faces a similar scenario here. Grace trails by four but will fully believe he can turn it around here. He’s a massive +6000 to win his second LIV event and could be worth a small play.