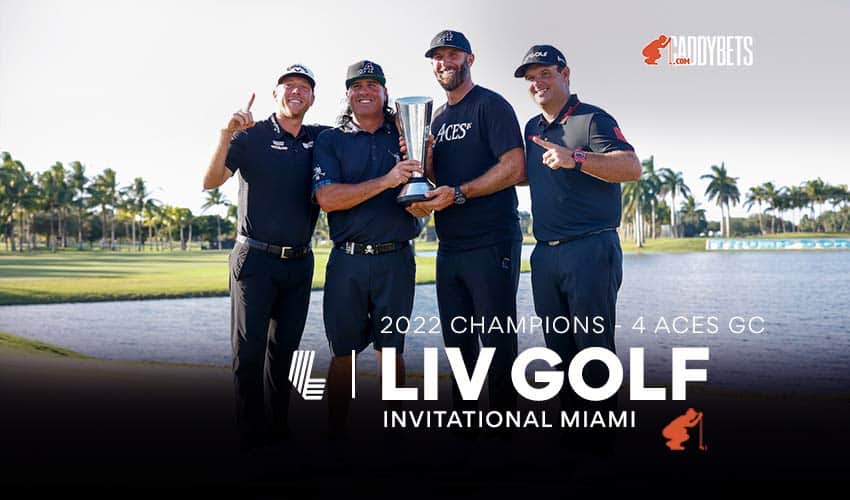 Dustin Johnson capped off what was—by far—the most successful money-earning season in the history of golf after he sank a par putt on the final hole of the LIV Golf Team Championship at Doral in Miami on Sunday.

The putt kept the 4 Aces team, comprised of Patrick Reed, Talor Gooch, and Pat Perez, one stroke ahead of Punch GC and team captain Cameron Smith. Reed sank a birdie on 18 to provide the winning margin.

Johnson, in eight events with LIV, earned $35,637,767 in winnings, which includes an $18 million bonus for winning the series’ individual championship from the first seven events. This tournament was strictly a team title with a purse of $50 million—double that of every other LIV tournament.

“It’s been amazing,” Johnson said after the win. “Obviously, the fans [are] what makes it. This week’s been incredible. This whole season has gotten better and better and obviously, this finale has been unbelievable.”

The 4 Aces won three team competitions in the first seven tournaments before taking home this win. They were seeded first in this event, and the top-four teams earned a first-round bye into the semifinals.

Johnson, Reed, and Perez each shot a 70, whereas Gooch carded a 71 on the Blue Monster course. The scores reset going into Sunday’s battle among four teams, and the teams combined -7 was one shot better than Punch’s -6. The winners split a $16 million first-place prize four ways.

Smith, who shot a 65 to essentially carry the team on his back, was helped out by a 2-under 70 from Matt Jones, but Wade Ormsby (73) and Mark Leishman (74) had rough days. Still, $2 million for each golfer isn’t a bad weekend at the office.

Brooks Koepka’s Smash GC had to play on the first day, but they advanced to the finals after a strong showing on Saturday. However, Jason Kokrak (68) was the only player to break par on the team that included Peter Uihlein, and Chase Koepka, and they finished in third place.

Finishing fourth of the four teams on the day was Stinger GC, a team comprised of all South African players. Louis Oosthuizen and Char Schwartzel had decent days with 71s, but Hennie du Plessis (76) and Branden Grace (80) had days to forget. But they’re sure not to first the $1 check each will receive for the fourth-place finish.

Among the big-money winners, this year on the LIV circuit included Uihlein, who earned $12.5 million despite not having won in his career on the PGA Tour. Perez picked up over $8 million—most of that coming from team wins with the 4 Aces rather than his individual play—which is more than he made in the last five years combined on the PGA Tour.

What’s next on the LIV Golf?

The first year of LIV Golf is in the books. In 2023, the series is planning 14 events, and its top stars are hoping to compete with the best from the PGA Tour at the four majors. The circuit is in the midst of trying to earn Official World Golf Ranking points, and the majors haven’t said whether that would even make LIV golfers eligible, so it will be an interesting offseason to follow.