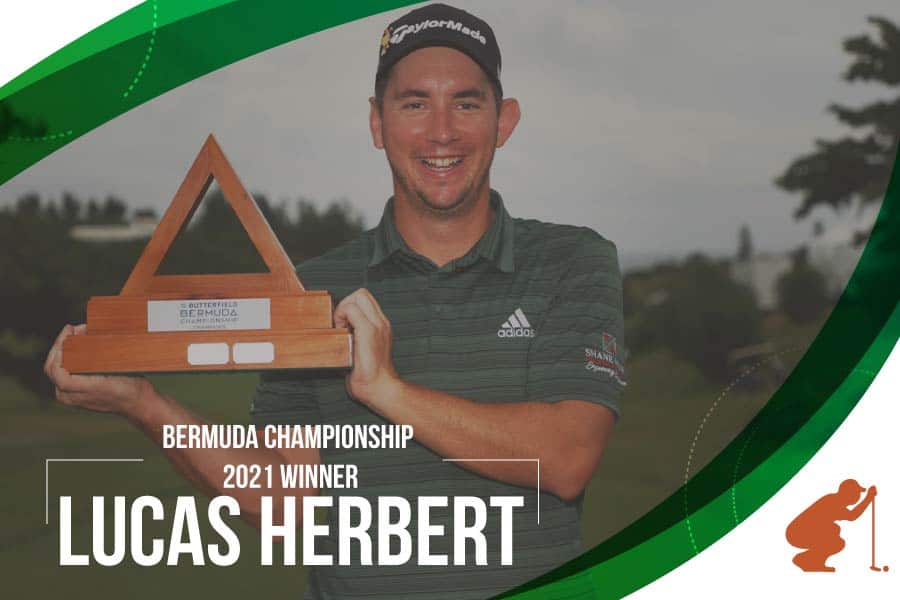 Going into this weekend’s Butterfield Bermuda Championship, there was plenty of allure for a potential first-time winner, given a somewhat weaker field and the fact that the event was bumped up to full status on the PGA Tour after the WGC-HSBC Champions event was canceled. This meant 500 FedEx Cup points and an invitation to the Masters for the winner. After Sunday’s windy final round at Port Royal in Southampton, Lucas Herbert became that first-time winner.

Herbert recorded two birdies in a three-hole stretch, taking the lead on No. 14 and parring the final four holes to record a 15-under 269, good enough to hold off Danny Lee and a hard-charging Patrick Reed by one stroke to win the tournament title. The 25-year-old Australian won the Irish Open on the European Tour earlier this season, but he had just earned his PGA Tour card through the Korn Ferry Tour Finals in September, this was the first event where he made the cut in three tries so far in the 2021-22 season.

“I felt like I grinded really well early, and I had the right attitude going into the day that it wasn’t going to be easy,” Herbert said after shooting a 69 on Sunday. “You just knew it was going to be one of those days where you had to battle really, really hard. Under par was going to be a great score.”

Prior to Lucas Herbert taking the lead, Lee looked to be in control of the tournament until a double bogey on 12 opened the door and he then followed it up with bogeys on 13 and 14. The fellow Australian tried to charge back but ran out of time by having to go up and down for a par on No. 18, despite birdieing the three holes prior to that, to finish at par 71 on the day.

“I just bite my tongue, and I just try to grind it out,” Lee said after his round. “there’s so many times when that time comes or whenever that disappointment happened, I just kind of half-assed it all the way in, so this time I didn’t want to do that. I gave 120% all the way in.”

There was a bright spot in the runner-up finish for Lee, as he earned enough FedEx Cup points to get his PGA Tour card on his merit after he started the season on a medical exemption.

Patrick Reed, coming into the event as the highest-ranked golfer in the field with a No. 24 rank in the Official World Golf Rankings, wasn’t toward the top of the leaderboard until he birdied four of the final six holes, giving him a 65 on the day and putting some pressure on Herbert to log pars down the stretch to keep out of a playoff with Reed.

It capped a memorable tournament for Reed, who scored an improbable eagle on Thursday. After hitting his tee shot out of bounds on the par-5 17th hole, Reed’s drop landed in some rough, but with his feet on the cart path, Reed bounced his shot twice on the green and into the hole. If he had hit his tee shot in that spot, it would’ve been an albatross 2.

Patrick Rodgers finished in fourth at 13-under, two shots off the lead, and the round of the day belonged to Scott Stallings, as his 62 catapulted him 45 spots into a tie for fifth place at 12-under. He was tied with Taylor Pendrith, whose 61 on Friday helped give him a three-shot lead going into Sunday, but a five-over 76 in his final round dropped him into a tie with Stallings for fifth.

Pendrith dropped him into fifth place

Pendrith, going for his first PGA Tour win, fell behind with three-straight bogeys to close out the front nine, and he was sitting one shot behind Lucas Herbert going into the 17th hole when both his tee shot and second shot went into the water. The resulting double-bogey dropped him into fifth place.

“It was probably the worst swing of the week, the year maybe, but I wouldn’t change it,” Pendrith said after, who described his round as “not great.”

With Reed sitting in the clubhouse at 14-under, Herbert knew that he couldn’t make a mistake in the final few holes, and he responded by going conservative with a driving iron off the tee on the final two holes.

“This finishing stretch kind of played into my hands a little bit,” Lucas Herbert said. “I felt like probably the strengths of my game—the longer game, whether it be long irons or 3-woods, off the tee—I felt like that really played into my wheelhouse. So I just tried to really stay positive with the swings.”

After being able to finish in a pressure-packed situation, now Herbert can enjoy the spoils of the victory.

“The next 12 months are going to be really cool, [as the win] definitely gets me into the Masters and Kapalua [the Sentry Tournament of Champions in January]. It’s going to be lots of fun, [but] I think the next few days, we’ll sit back and think and celebrate.”

Morris Receives Thrill of a Lifetime

Brian Morris, who is the head pro at Bermuda’s Ocean View Golf Course and is battling terminal brain cancer at age 54, was given a sponsor’s exemption to play in the tournament and fulfill a life-long dream.

He shot and 89 and 92 to miss the cut, but he couldn’t be happier to have played in the event.

“I’ll always have one PGA Tour start to my name,” Morris said. “I got to see my family and friends. It’s huge. … I’ll never forget this forever.”

Tour Heads to Mexico Next

This week’s event is the World Wide Technology Championship at Mayakoba in Mexico, meaning that the Tour went from Japan two weeks ago to Bermuda and now to Mexico. Viktor Hovland returns as the defending champion and will face a field that includes Justin Thomas and Brooks Koepka.

Get up to 100% match bonus and make sure to stay tuned for PGA latest, news and tournaments schedule.