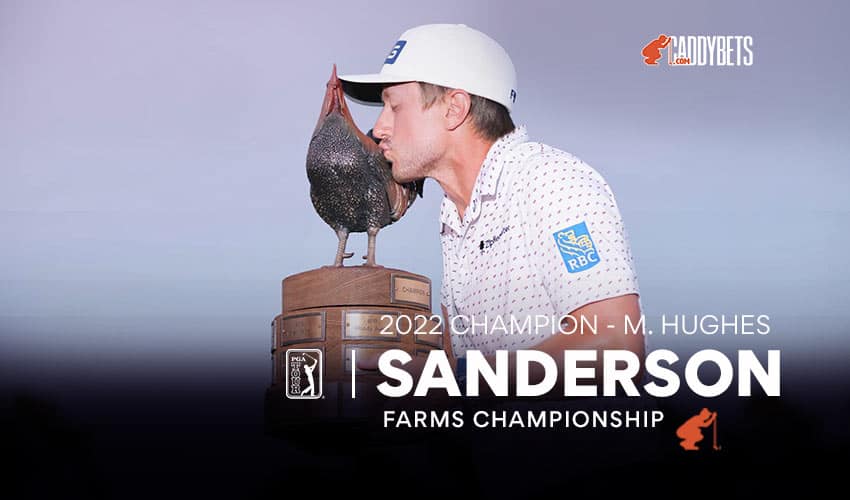 A week after Canadian Mackenzie Hughes watched the International Team play without him at the Presidents Cup, the 31-year-old took to the Country Club of Jackson in Mississippi, made a clutch two-putt on No. 18, and then won the Sanderson Farms Championship on the second playoff hole over Sepp Straka for his second-career win on the tour and first in over five years.

After Straka finished his day with a 67 to end up at a 17-under 271 for the tournament, he had to wait out Hughes on the 72nd hole to see if his score would be good enough to win. Hughes sat around 100 feet away from the cup after his second shot on the par-4 18th.

Once the tie was secured, the two played the 18th hole again to par, so they played it a third time. Straka missed a 20-foot putt from the fringe for birdie, but Hughes sank his 8-footer to card a 3 and win the tournament.

After the win, Hughes talked about what he went through after not being called by International Team captain Trevor Immelman for last week’s event.

“I guess you could say it was fuel, because I definitely worked a little harder after (not making the International Team), and felt like that was a team I really, really badly wanted to be on, and I felt like I could have been a good help there,”Mackenzie Hughes said. “I totally respected Trevor (Immelman)’s decision to go in the direction he went, and there wasn’t a weak link on the team; they had 12 great players … I still cheered like hell for them to pull it off. But I’m definitely motivated for Montreal, and I don’t want to have to let that come to a captain’s pick next time when that comes around.”

Royal Montreal will host the 2024 Presidents Cup, and Hughes is well on his way to a berth on that team to play in his home country.

Hughes had immediate success on the PGA Tour, winning the RSM Classic in 2016 very early in his career. This win gives him some added perspective.

“The second one felt harder,” Hughes said, “because I’ve had to wait a lot longer for it. The first one came in my fifth tournament as a PGA TOUR member; I felt like, ‘Oh man, this is going to be easy; I’m going to be able to rack up a few of these,’ and it’s been six years since I did that.”

Hughes entered the day one shot behind Mark Hubbard for the lead, but Hubbard faded on Sunday with a 74 to finish tied for fifth at -13. Hughes shot at 69 to tie Straka, who started the day in third before moving to the top spot with his 67.

Straka, last year’s Honda Classic winner, has been on a run since missing six-straight cuts over the summer. He was runner-up at the FedEx St. Jude Championship and finished seventh in the season-ending Tour Championship.

Behind the two playoff participants, Garrick Higgo was third at -16, and rookie Dean Burmester finished fourth at 15-under. Tied with Hubbard for fifth were Emiliano Grillo, Nick Hardy, and Keegan Bradley.

The PGA Tour heads to Las Vegas for the Shriners Children’s Open. Patrick Cantlay, Max Homa, and Tom Kim will be among those looking to top defending champion Sungjae Im at TPC Summerlin.