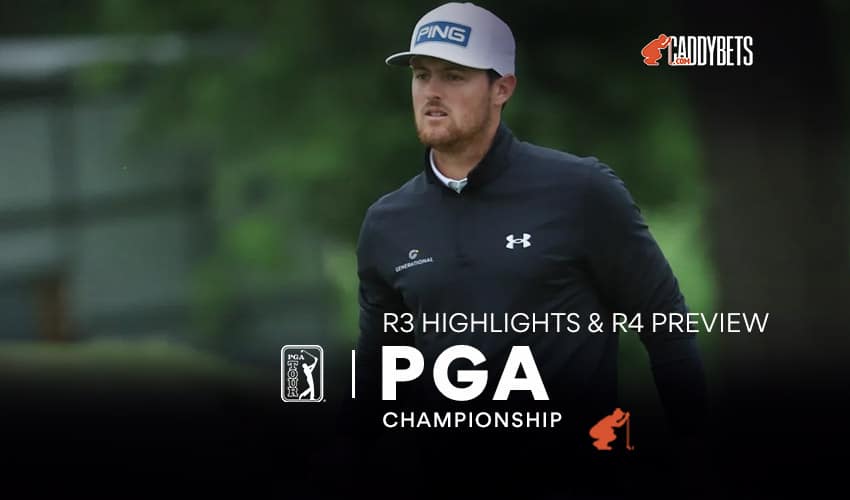 Mito Pereira will take a three-shot lead into the final round after a wild moving day at this year’s US PGA Championship tournament.

Pereira’s nearest challengers are the pair of Will Zalatoris and Matt Fitzpatrick with the pair back on -6. America’s Cameron Young is a shot further back after shooting an impressive 67.

Played amidst wet, windy and cold conditions it was a day that saw the dynamics of the leaderboard entirely shift.

Starting the day in the lead was Will Zalatoris. Zalatoris had played beautifully over the first two rounds, with his accuracy into the tight greens proving exceptional. However, in the blustery conditions, Zalatoris’s game abandoned him and he was left to rue a +3 round.

At one stage of his round, Mito Pereira who started the day one shot behind Zalatoris also looked to be struggling in the conditions, however, the Chilean turned it around remarkably on his back nine, finishing with three birdies in his last six holes to record a gutsy 69.

Fitzpatrick who might currently be the best player on Tour yet to record a victory displayed his usual steady game and produced one of the best rounds of his career, a superb 67 has put him right in contention.
.

Once again our friends at Jazz Sports have all of the best odds ahead of what looks to be a dramatic final day. You can find out more by following this link JazzSports/CaddyBets.

By holding a three-shot lead, Mito Pereira’s odds of +125 still make some appeal. Pereria showed in his back nine yesterday that he has the guts and composure to win, he also tees off today knowing that par golf will probably be enough to see him win his first major. With the course playing long and tough, three shots could be tough to claw back.

Will Zalatoris +400 and Matt Fitzpatrick +320 will both start at -6 and it’s the Englishman who will carry the momentum into the final round. Fitzpatrick still has a lot to do to eat into the Chilean lead but he might be the best man in the field to do it if Pereira starts to faulter.

One of the most consistent performers of the season has been Cameron Young. Young has recorded three second-place finishes on Tour this season and he looks primed for yet another challenge. Odds of +900 could be a good bet considering Young will be full of confidence heading into one of the biggest rounds of his career.

Abraham Ancer was a winner on Tour last season and starts the day five strokes behind Pereira. The Mexican played steady yesterday finishing with a level par 70. More will be needed today, but Ancer has the class, and odds of +1800 could be the value play of the day.

Seamus Power has enjoyed a remarkable season and the Irishman, who is only playing in his second-ever major needs to claw back six strokes. Power will fly completely under the radar but his 67 in round 3 was the second-best round of the day. To carry on his momentum, odds of +4000 represent some tremendous value.