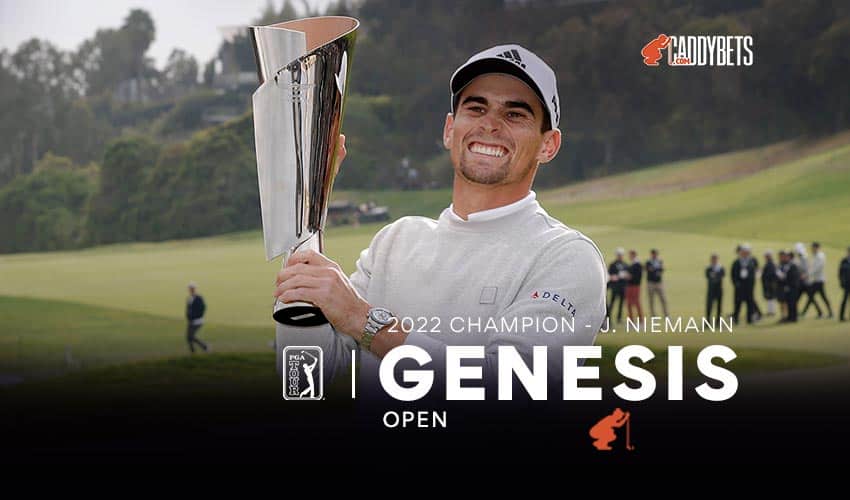 It’s not often on the PGA Tour that you can say a tournament was won before the weekend, but that was the case at Riviera Golf Club for this year’s Genesis Open.

Facing a field that consisted of each of the world’s top-10 golfers, Joaquin Niemann started the tournament with back-to-back 63s and built enough of a lead to be able to play it safe on Sunday with an even-par 71 to win the tournament by two strokes over a hard-charging Collin Morikawa.

It wouldn’t be a final round on the PGA Tour, however, without some nervous moments for the leader. The 23-year-old Chilean was ahead by just one stroke following seven holes of play after starting the day with a three-stroke advantage. But on No. 8, Niemann made a seven-foot birdie putt, while Cameron Young overshot the green and bogeyed the hole.

Niemann then recorded an eagle on No. 11 to bump the lead to five, building enough of a lead to withstand a charge from Morikawa, who eagled the 10th hole and had two more birdies on the back nine before bogeying No. 18.

At the end of the day, the 19-under 265 was one shot off of Lanny Wadkins’ record at Riviera that he set in 1985 and the first wire-to-wire win in this tournament in 53 years.

“Obviously, it’s one of the toughest tournaments during the year,” Niemann said after winning his second PGA Tour title. “It’s got the best field, the best players are here, and that proves to myself that I can be competing with the top guys. I can be up there in the world ranking. I think it’s going to give me a lot of confidence for what is coming next.”

Niemann scored a season-best fifth-place finish in the World Wide Technology Championship at Mayakoba before missing the cut in his next two events before the winter break. Niemann took that time to reset in his home country of Chile, not returning to the PGA Tour until the Farmers Insurance Open three weeks ago, where he finished sixth. Niemann says the break always refreshes him.

“I go back to my normal life. I’ve been [in the United States] for a little more than three years, and it’s hard for us when we don’t live in the U.S., being so far from home,” Niemann explained, “so it’s nice to go back once in a while to see my friends, see my family, and do what I used to do when I was 16.”

Morikawa’s 17-under after shooting a 65 on the day ended up tying him with the rookie Young for runner-up—Morikawa’s second this season after finishing second at The CJ Cup in October. Viktor Hovland returned to form after missing the cut in Phoenix last week by posting a fourth-place finish, tying with Adam Scott at -14.

Justin Thomas was sixth at 13-under while Scottie Scheffler followed up last week’s win with a seventh-place run, tying Maverick McNealy at 12-under. C.T. Pan was ninth, and Rory McIlroy, Chez Reavie, and defending tournament champion Max Homa tied for 10th place.

The western portion of the PGA Tour schedule is complete, and now the pros head to east for the Florida swing, starting with this weekend’s Honda Classic at PGA National. Matt Jones is the defending champion, as the Australian won last year’s event by five strokes.

Join us to receive our daily Golf content and make sure to stay tuned for Genesis Open updates, golf news, and PGA Tour schedule.