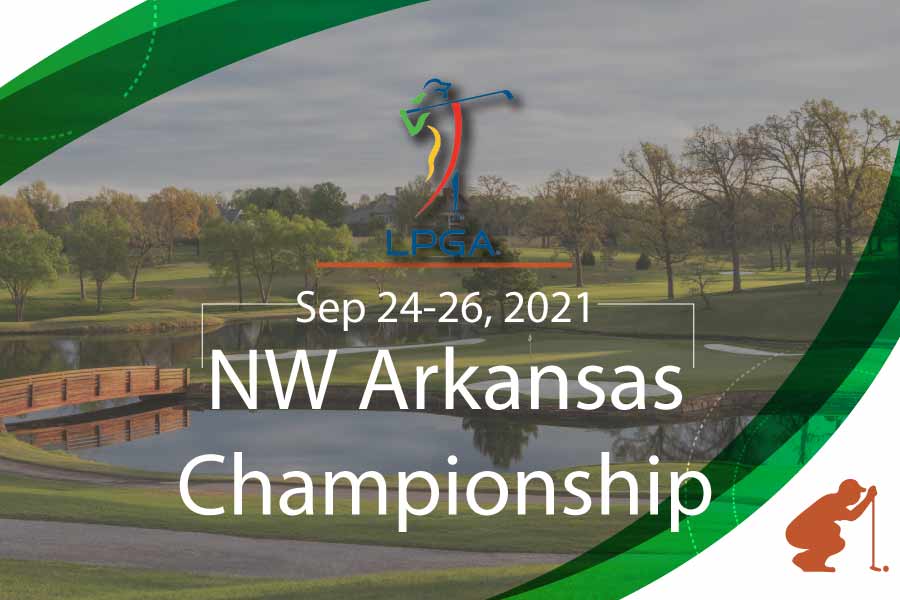 The LPGA Tour is headed to Arkansas this weekend, where the top female golfers on tour will battle for the 2.3 million dollar purse at the NW Arkansas Championship presented by P&G.

In its 15th consecutive year, the NW Arkansas Championship will again be played at the Pinnacle Country Club in Rogers, Arkansas.  Measuring over 6,331 yards and playing as a par 71 has been known to produce some very low numbers in past events; in fact, over the past four events here, it has taken an 18-under par to win the whole thing.

Remember, that’s over 54-holes, not the traditional 72-hole Tour events, so look for that trend to continue as some of the best female golfers on the LPGA Tour take aim to shoot 20-under for the weekend.  Last year Austin Ernst outlasted Anna Nordqvist by two shots after shooting a 63 and finishing at 20-under for the tournament.  Only once in its 14-year history has the winning total not been double digits under par for 54-holes, and Nasa Hataoka’s tournament record 21-under in 2018 is testament to the scoring opportunities here.

So, besides the traditionally low scores of this tournament, what else makes the NW Arkansas Championship unique? Two words… Hog Calling! I’m serious, this is actually a thing, and the ritual can be found on the 17th hole at the Pinnacle Country Club this weekend.  Basically, Hog Calling is the act of raising your arms and loudly chanting “Wooooo” followed by “Pig. Sooie” as you bring your arms down. Also, as weird as it may be, some golfers play along with the crowd by wearing the “Hog Hat” as they play the 17th par-3.

Lydia Ko actually did precisely this on her way to victory in 2016, much to the crowd’s delight.

As we get into who we think can win the whole tournament, we need to take a look at the course.  The Pinnacle Country Club should play somewhat open this weekend, so low scores are expected, but there are two holes, in particular, that can mess with your scorecard in a hurry, and they happen to be back-to-back.  The 14th is a long par five, but it looks like the tee box has moved up a bit which should alleviate a little of the distance required.  The second is the Pinnacle’s signature hole.  A gorgeous island green par-3 with three greenside bunkers that add a tad more anxiety.  Golfers must be highly accurate to avoid all the hazards that surround this par-3.

Let’s dive into the field and talk through who can actually win this tournament.  With seven of the world’s top ten making the trip to Arkansas, expect an excellent old fashion shootout.  According to Jazz Sports, the overall favorite is the world’s number two player in the world, and last week’s tournament winner in Portland is Jin Young Ko at +800.  Yung Ko will look to keep her momentum this week as she looks to win a tenth event on the LPGA Tour.

Although Young Ko is the clear favorite, she is not our pick to win the whole thing.  She will be in contention come Sunday, but with seven previous winners of this event ready to tee up, she will need to be in top form.

Along with that is Young Ko’s history at Pinnacle, which has not been great. She has played the course three times and finished with a tie for 19th and a tie for 9th to show for it.

Before I drop my pick to win the whole tournament, I wanted to give a few players to keep an eye on who sits with favorable odds according to Jazz Sports, and possibly a lot more betting upside.  Keep an eye on Jennifer Kupcho and Carlota Ciganda to make some noise this weekend.

Let’s start with Carlota Ciganda.  If you have ever read any of my predictions in the past, you will see that I like players who have a strong history of the course they are playing.  Ciganda falls directly into that category, having played in this tournament five times since 2016. Ciganda has accumulated four top 18 finishes in those five tournaments just mentioned, including a sixth-place result at the 2019 Walmart NW Arkansas Championship.  Add that to her recent play at the Cambia Portland Classic, where she fired a first-round 68 en route to an eventual fifth-place finish.

The recently engaged 24-year-old Jennifer Kupcho has been coming into form lately, as evident by her top ten finish at the Cambia Portland Classic last week.  Although she is still looking for her first win on the LPGA Tour, Kupcho has registered top tens in four of her previous seven starts, and her game plays well on a course like Pinnacle.  She is currently ninth in iron play on the tour and ranks 12th in eagles and 13th in birdies. So don’t be surprised to see Kupcho right there in the mix on Sunday afternoon.

My pick to win this weekend is the 2016 NW Arkansas Championship winner, Lydia Ko. She is sitting at +1100 odds to win the whole thing as projected by Jazz Sports, Ko has been playing some terrific golf as of late, which is highlighted by two top-3’s in her last three starts. However, Ko has a lot to prove.  The former world’s number one player has seen her career hit a rough patch, to say the least.  Ko was unstoppable as she amassed 12 wins, an insane 34 Top-5 finishes, and 47 Top 10s between 2014 and 2016, but then the wheels seemed to come off. Since that point, she has just one victory, nine Top 5s and 24 Top 10s on her resume, but the New Zealander has been rejuvenated after her disappointing tie for 29th at the AIG Women’s Open, plus she loves this course, playing here every year since 2013, and winning here in 2016. As a result, Ko is motivated to finish the season strong, and that motivation should push her into contention on Sunday afternoon.