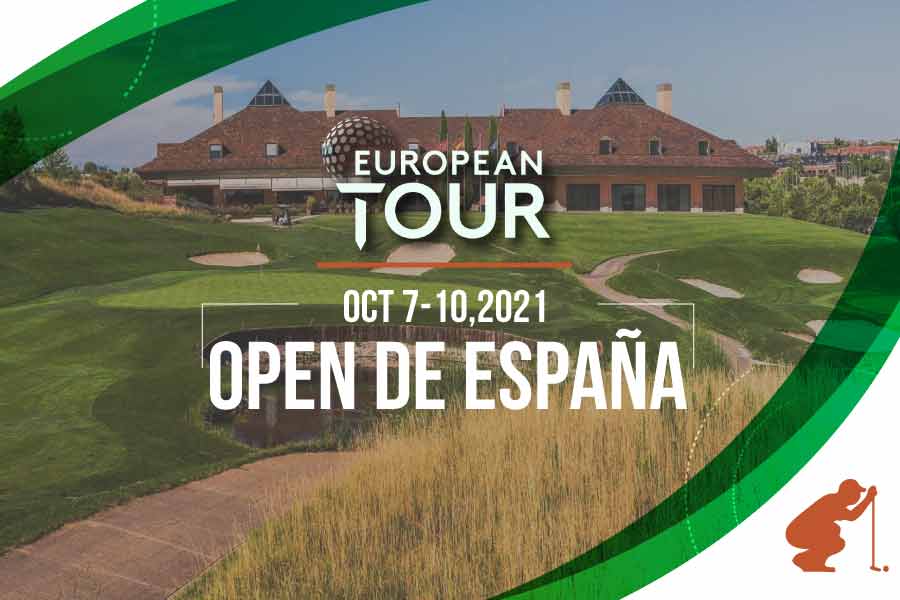 Jon Rahm was one of the few bright spots for the European Ryder Cup team two weeks ago and coming off that and a recent run to second place in the final FedEx Cup standings for 2021, Rahm returns to his home country of Spain as the overwhelming favorite at the European Tour’s Open de España (Spanish Open).

This event began in 1912 and had been played every year since 1940 until it was canceled last year due to the COVID-19 pandemic. Rahm is the defending champion and is going for three straight titles here, having won in both 2018 and ’19. He was particularly dominant in 2019, tying tournament records of a 262 and 22-under par, winning by five strokes over Rafa Cabrera-Bello. Rahm joins fellow countryman Seve Ballesteros (three wins) as multi-time winners of this event. Golf legends have also won here, including Bernhard Langer (twice), Arnold Palmer, Nick Faldo, Colin Montgomerie, Sergio Garcia, and Padraig Harrington.

The tournament is being held at Club de Campo Villa de Madrid, which is hosting the tournament for the second-straight time after not having done so since a three-year stretch from 1994-96. The Negro (black) course is one of two 18-hole courses at the club and opened in 1956. It has hosted several other European Tour events as well over the years.

Rahm is a major favorite, teeing off at +220; no other golfer has odds lower than +1800 (Bernd Wiesberger). The Spaniard knows that nothing is guaranteed, but he’s focused on tying fellow countryman Ballesteros’ mark of having won this event three times over the course of his career.

“That is my goal, without a doubt, winning the third title, equaling Seve, and getting as close as possible in the Race to Dubai,” Rahm said in a pre-tournament press conference. “I’m really excited to be here, I’m playing well, and even though we didn’t get the result we were hoping for at the Ryder Cup, personally I played well, and I hope to be able to continue that this week.”

Rahm also has another advantage because the Madrid native played this course several times growing up, both as a teen with his father and at official amateur events. While he’s not predicting that he will need to break the course record to win, he expects the scores to once again be very low.

“I think that 20-under is doable, but I’m not sure if it’ll be better or worse than that. Clearly, in today’s game, anyone could have the week of their life and equal or beat my 22-under from 2019, but hopefully, whatever I score, it will be enough to win,” Rahm added.

While Rahm is well-known in Spanish golf circles, things have certainly changed since his last appearance here in 2019. He’s become the world’s top-ranked golfer, won the Race to Dubai last year, was victorious at the U.S. Open this year, and had the low 72-hole score at the Tour Championship, just missing out on the FedEx Cup.

Wiesberger was a part of the Ryder Cup team but hasn’t played a tournament since the BMW PGA Championship a month ago, placing tied for 20th there. He was also second at the Omega European Masters in August. He’s made the cut in 16 of 18 events this season, including a win at Made in HimmerLand back in May. He won three times in 2019 and has eight career European Tour titles.

Calum Hill and Victor Perez are at +3000 each. Hill was 17th at the Alfred Dunhill Links Championship last week and has made the cut in four out of his last five events. Included in that span is a win at the Cazoo Classic in August, which was his first win on the European Tour. Perez won the Alfred Dunhill in 2019 and has a victory in Spain in 2017 at the Challenge de Espana.

Other golf players to watch

Guido Migliozzi is at +3500 but hasn’t won since two victories in his rookie season of 2019. He was 17th last week and placed seventh at the Omega European Masters in August.

Richard Bland, at +4000, is worth a look after a hard charge in the final round of the Alfred Dunhill on Sunday, catching Danny Willett briefly for the lead before settling for a fourth-place finish. Masahiro Kawamura finished seventh here in 2019 and was just one of two other golfers that matched Rahm’s performance on the par-5 holes in that event, so he has the length to compete if his short game is working. He missed the cut at the Alfred Dunhill, but he appears to not be a strong links player yet, and the narrower fairways at Club de Campo Villa Madrid suit his game much better. He has three top-five finishes in his last eight events as well.

Among a large group at +4000 is 20-year-old Nicolai Hojgaard. He missed the cut two years ago, but that’s when he was 18, and he has performed well recently. He recorded his first win last month at the Italian Open and hasn’t finished below 21st in his last five events dating back to the Cazoo Classic in mid-August. In that stretch, he’s shot under par in 17 of 20 rounds, including his last eight.