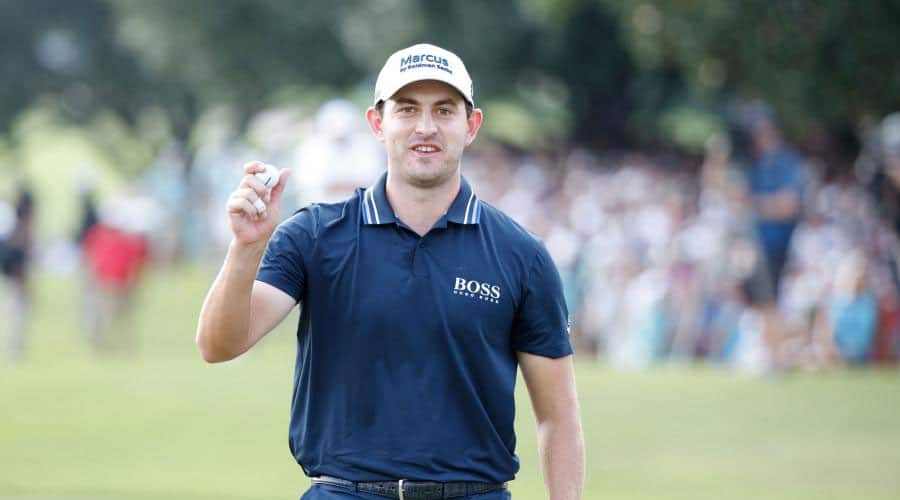 It turned out to be a duel at the top of the leaderboard for most of The Tour Championship, and thanks to a four-stroke head start, Patrick Cantlay held off Jon Rahm, the world’s top-ranked golfer, to win the tournament and the FedEx Cup by one stroke on Sunday.

By virtue of his win at last week’s BMW Championship, Cantlay was the FedEx Cup points leader and was at -10 before he even teed off on Thursday at East Lake Golf Club in Atlanta, Georgia. That was two stroke ahead of Tony Finau (who won the other playoff event, The Northern Trust), three ahead of Bryson DeChambeau (who Cantlay beat in a playoff at the BMW), and four ahead of Rahm (who led for much of the BMW before faltering on the back nine).

After the opening round, Rahm cut the lead in half to -2, but Cantlay did enough to protect his lead. He continued to do so throughout the entire weekend, as it was a two-horse race for the title—Cantlay and Rahm each lowering their score enough to keep any other contenders at bay.

In a season that was marked by several golfers unable to hold a lead after doing so over the first 54 holes (golfers who did so this year lost on all four occasions), Cantlay hit shot after shot to stay out in front.

But the drama that’s been a part of so many Sundays this season did emerge on the 17th hole Sunday. Cantlay had a two-stroke lead but hit his drive into deep rough; his second shot flew over the green and landed in the gallery. He sank a 6-foot putt to save bogey, but the lead was now just one after Rahm parred the hole.

Rahm added to the pressure by driving straight down the fairway on the par-5 18th. But Cantlay responded with his best drive of the day, and his second shot was a 6-iron from 218 yards out that ended up resting around 12 feet away from the cup. Rahm’s second shot also landed by the cup but was carrying too much speed, ending up beyond the green. Rahm had to chip-in from there to have a chance to force a playoff, but he narrowly missed.

At that point, Rahm played it safe and two-putted for birdie and the championship, finishing at -21 when you include his -10 bonus with the Starting Strokes.

“It’s fantastic,” Cantlay said after the biggest victory and payday of his career, plus he gets a 5-year full exemption on the PGA Tour. “It’s such a great honor because it’s all year. I played really consistent all year and caught fire at the end. There’s a lot of satisfaction considering all the work I put in my whole life.”

It was Cantlay’s fourth victory of the season, which was double the amount of any other golfer, so it’s fitting that his season ended as the FedEx Cup champion. Ironically, one of those wins came at The Memorial, when Rahm—who was leading by six strokes—had to withdraw on Sunday due to a positive COVID-19 test. It capped a career-year for the 29-year-old, who missed nearly three years of his career with a back injury and overcoming the emotional trauma of witnessing one of his best friends get killed in a pedestrian accident in 2016. He won his first PGA tournament—the Shriners Hospitals for Children Open—in 2018.

“It’s exactly why I play golf. I play golf so I can be in those moments against the best players in the world,” Cantlay said. “It’s why I practice so hard. It’s why I’m in love with the game because it’s that great vehicle for competition. It maybe makes it a little sweeter knowing that the guys I played against are the best players in the world.”

Cantlay’s victory here likely began last Sunday, when he survived a six-hole playoff with DeChambeau on a course that put Cantlay at a big disadvantage against the big hitter off the tee. His clutch putting on that day earned him the nickname “Patty Ice” by fans in the gallery. That win put him in position to start the Tour Championship in the lead, which he defended over the course of four days, so even though Rahm outplayed him on the course this weekend, he gave all the credit to Cantlay.

“Patrick played great golf, and he was four shots ahead of me. And even though I might have been the better man over the week, he earned it,” Rahm said, who took home a nice consolation prize with a $5 million payout as runner-up for the FedEx Cup. “That up-and-down after missing from 17, the second shot on 18 to almost make it is even more impressive. I think you can say he won this.”

Rahm and Kevin Na finished at -14 when you take out all Starting-Stroke bonuses, which tied for the best score on the course over 72 holes. Na earned a $4 million bonus, as did Justin Thomas, who ended up in fourth place after sinking a birdie on No. 18.

Further down the leaderboard, Olympic gold medalist Xander Schauffele and Viktor Hovland tied for fifth at -14. DeChambeau was next at -13 while Dustin Johnson, the 2020 Tour Championship winner, was eighth at -11. Abraham Ancer and Billy Horschel rounded out the top 10 at -10. For Horschel, it could be the boost he needed to get U.S. Ryder Cup team captain Steve Stricker’s attention, as the six captain’s picks will be announced later this week.

Patrick Reed, who revealed that the pneumonia he was battling over the past few weeks was serious enough to be considered life-threatening by his doctors, returned after missing the first two events of the playoffs and finished 25th. He said he only returned in order to try and better his standing with Stricker to try and make the Ryder Cup team as a captain’s pick. Stricker’s six selections will come this week, joining the six automatic qualifiers for the event against Team Europe at Whistling Straits starting on September 24.

Follow us on Social Media for instant Cantlay wins the Tour Championship updates!