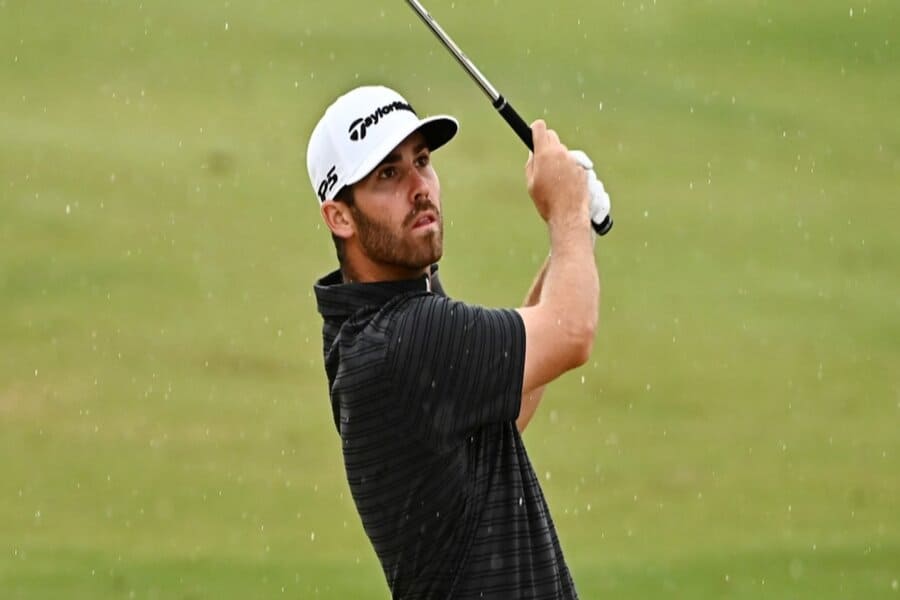 PGA Shriners Children’s Open Update Into The Final Round

As we head into the final day of the 2021 PGA Shriners Children’s Open, we look to see a change atop the leader board once again.

Each day of the tournament has ended with a new leader, and Saturday was no exception.  Enter Adam Schenk, who shot a 5-under 66 and a one-shot to grab the lead heading into the final round on Sunday.

Schenk was at 18-under 195, used the wind to his advantage as he ripped his drive onto the par-4 15th green, which started a run of three birdies over his last four holes. The wind played a factor on the 18th with a drive that set up a gap wedge for his final birdie, giving the 29-year-old from Indiana another shot at his first PGA Tour victory.

Right on Schenk’s heels is Matthew Wolff at 17-under.  Wolff is one of the more dynamic young players on the Tour and is now the projected winner of the whole tournament at +250 odds as projected by Jazz Sports. Wolff hit a pitching wedge on the 514-yard 16th hole and made an eagle from 18 feet, leading to a 65 for the round.

Behind The Top Two

Sitting right behind the top two are six players separated by three shots going into the final round at TPC Summerlin, a group that includes Sam Burns.

Burns, who also has the second-best odds to win the tournament at +300, shot 68 two shots back of the leader at 16-under par.

Like the previous two days, Burns was cruising right along and took the lead with a birdie on the 11th, but Burns missed a birdie chance on the 15th and then came up short in the water on the 16th, leading to a bogey and dropping him behind the leaders.

Andrew Putnam (66) and Chad Ramey (69) also were two shots behind, while Sungjae Im, who was a top of the leader board after Friday’s play, spent too much time swapping birdies and bogeys for a 70 to finish three back.  Im and Ramey sit tied behind Burns with the best odds to win the tournament at +1000, as projected by Jazz Sports.

Sunday’s final round at the 2021 PGA Shriners Children’s Open should come down to the final hole, and I’m expecting Burns, Wolff, and Schenk all to be in contention.  If Burns stays consistent the whole round, he should walk away with his second tournament win in as many weeks, but he can’t have any hiccups like he has had the past two rounds. Likewise, expect Wolff to continue his strong play as he looks to win his first tournament in front of friends and family.

Heading into the final day at the PGA Shriners Children’s Open, we take a look at the adjusted odds to win the whole thing as projected by Jazz Sports