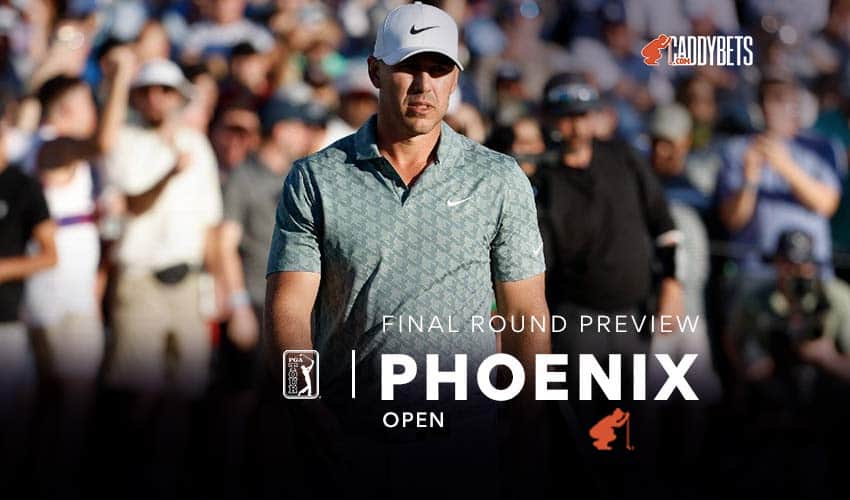 The rowdiest party in golf was on full display during round three Saturday at the WM Phoenix Open. What awaits us in the Phoenix Open final round?

If you haven’t seen it, then google Sam Ryder hole-in-one and watch the craziness ensue after Ryder dropped his ace in front of 17,000 rowdy fans on the 16th, who then threw drinks in the air in celebration and littered the turf with bottles, cans, and cups, leading to about a 15-minute delay. That was undoubtedly the highlight of Ryder’s day because he’s not going to factor on the leader board; that honor remains with the round two leaders Sahith Theegagla.

Theegala overcame a double bogey on the par-4 second to shoot a 69 for the round, leaving him at 14-under for the tournament. Making his event debut on a sponsor exemption, it’s fair to say that no one expected him to be in this position as we come into the final round on Sunday. Still, here he sits, one stroke ahead of defending champion Brooks Koepka and second in his odds to win the tournament at +550, as projected by Jazzsports.

Theegala still has his work cut out for him, as Brooks Koepka shot a 68 and is breathing down his neck one stroke behind. Nevertheless, the four-time major champion remains the favorite heading into Sunday’s final round at +350 odds, as projected by Jazzsports.

On Saturday, the most significant move came from Scottie Scheffler, who started the day none strokes behind Theegala.  Scheffler flirted with his second 59 before settling for a 62, which put him in a tie for third with a 12-under, and increased his odds to win the tournament to +700, as projected by Jazzsports. Scheffler played his first nine in 7-under 27 and added two birdies on his second nine.

The fourth-ranked player in the world, Patrick Cantlay, also making his first start in the event, finished with a 68 putting him in striking distance at the group tied for third sitting at 12-under. Cantlay’s odds to win also increased as he currently sits at +600, as projected by Jazzsports.

Xander Schauffele was on a roll to start the third round and was the leader at 14 under at the turn, but he made a double-bogey after driving into the water on the par-4 11th, and the wheels fell off a bit. Schauffele finished with a 69 and sits tied for third with the group at 12-under par. With his odds of winning at +700, as projected by Jazzsports, Schuaffele is still my pick to win it all. Even after struggling a bit on his second nine yesterday, Schauffele kept himself close enough to the leader to make Sunday extremely interesting, and I expect him to make back those two strokes early, and battle for the win come Sunday evening.

After Round 3 at the 2022 Waste Management Phoenix Open, Brooks Koepka remains the favorite, as projected by Jazzsports.

Get the latest information on the Phoenix Open Final Round updates, golf news, and PGA Tour schedule. Sign up to receive our daily Golf content to enhance your action and become a winner.