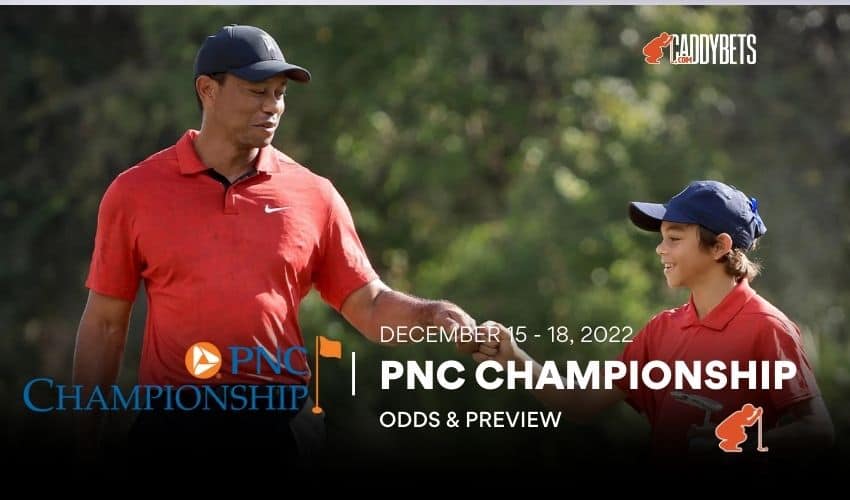 The PNC Championship, known as the Father/Son Challenge for most of its existence since 1995, is a laid-back event at the Ritz-Carlton Golf Club in Orlando, Florida. But despite being an exhibition event pairing 20 former men’s and women’s major winners with a family member, it became a big event a year ago when Tiger Woods played for the first time since his February 2021 car accident and son Charlie emerged as a potential future golf star.

Despite the original name of the event, the other player doesn’t have to be a father or a son, as grandsons and daughters have also participated. The only rules are that the other team member cannot be a touring golf professional at the time of the event.

Last year, the Woods pairing lost by two strokes to another very popular golfer and his son—John Daly and John Daly II.

The course at the Ritz-Carlton Orlando is a Greg Norman-designed course that uses the natural topography of the region (wetlands, ponds, live oaks, and cypress heads) to create wide fairways with plenty of hazards, and the greens are also a bit of a challenge. It’s a par-72, 7,122-yard course from the back tees, but some players are eligible to play from shorter tees.

The event is played over 36 holes—18 on Saturday and 18 on Sunday. It is played under a scramble format, meaning that the best ball is used after each shot and one score is tallied by each team per hole.

All Eyes on Tiger & Charlie Woods

Team Woods, consisting of Tiger and son Charlie, went bogey-free during last year’s tournament and at one point had 11 birdies in a row in the final round. They still fell a bit short of the record 27-under score posted by Team Daly (+550), which is comprised of John Daly and son John Daly II, who plays golf at the University of Arkansas.

The elder Woods is going to be playing a new ball at the event, the Bridgestone B X, which will give him a little more distance while sacrificing some spin of the previous ball he’s used. Perhaps Woods is going for the extra distance since he admitted last week that his 13-year-old son recently out-drove him for the first time!

Team Woods will be paired with Team Thomas (+300), who are the betting favorites. Justin Thomas and father Mike won this event in 2020.

Another storyline to watch will be Team Langer (+1100), as Bernhard Langer will be playing with son Jason, who won this event in 2019. Langer is a four-time winner here and could tie Raymond Floyd for the record with five if his team can win it.

Team Korda (+1600) is worth watching, as Nelly Korda came in fifth at the team QBE Shootout last week and is teaming again with father Petr, who is a former grand slam winner in the tennis world.

Thomas’ father is an excellent golfer, so the duo will be tough to beat. We also think Team Woods is capable of living up to the moment once again, and Langer keeps winning on the PGA Tour Champions, so it’s unwise to doubt him either.

Follow us on Social Media for more PNC Championship 2022 updates!