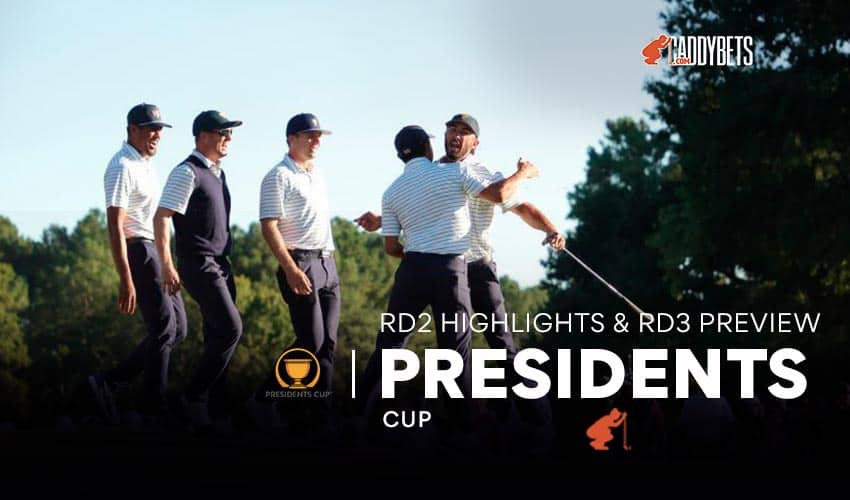 Day two of this year’s Presidents Cup is in the books with Team USA leading the Internationals 8-2. The six point margin that the Americans lead by equals the record for the most amount points won after two days of action. The Americans require just seven and a half points to retain their trophy. Here our Presidents Cup Day 2 Recap

Whereas Day 1 was all about foursomes, on day 2 it was time for fourballs.

Heading into Day 2 with a 4-1 lead, American captain Davis Love III was keen to ensure his team was able to carry on the early momentum. In the first pairing he sent out his best young guns Justin Thomas and Jordan Spieth in the hope they would put the first points on the board.

In a match that was typical of the day, the match ebbed and flowed but it was the putting of Spieth that saw the Americans over the line. The dynamic duo sealed victory on the 17th hole over the Australian pair of Adam Scott and Cameron Davis.

With one point already on the board, Captain Love was hoping that the pair of Scottie Scheffler and Sam Burns would bounce back from a disappointing defeat on day one with a victory over Sung Jae-Im and Sebastien Munoz.

It looked like the Americans were back to their best but some wonderful golf by Im bought the Internationals back into the match and it was only fair that this contest ended in a half.

The third match of the day also ended in a similar fashion with the teams of Cameron Young and Kevin Kisner and Mito Pereira and Christiaan Bezuidenhout unable to be separated.

With drama everywhere on the course, match 4 bucked the trend. In a loaded American team perhaps the most formidable pairing is the duo of Patrick Cantlay and Xander Schaufelle. The two went unbeaten at last year’s Ryder Cup and look to be repeating the feat here. With far too much game for Hideki Matsuyama and Kim Joo-Hyung, the stellar pair kept up their great run of form with an easy 4 & 2 win.

The best match was saved for last as Max Homa and Billy Horschel looked to end the day in style for the hosts as they took on the Canadien duo of Corey Connors and Taylor Pendrith.

With the match all square heading up the seventeenth, this match always looked destined to be decided by small margins. First, Max Homa drained a solid ten foot putt to send the Americans 1 Up heading down the last.

With the Internationals refusing to yield, Pendrith drained an excellent birdie putt to pile the pressure on Homa to convert a tricky 8 footer for the win.

Despite playing in only his second ever Presidents Cup match, Homa showed no signs of nerves, rattling home the putt to give the Americans what looks like an unassailable lead.

The third day of the Presidents Cup is the busiest of the week with two rounds of matches to be played. The day will start with four foursomes matches before four fourball matches will round out the day. Below are the foursomes matches that are slated for the morning, with the fourball pairings to be

revealed during the morning’s play.

If the International team are to have any hopes of making a dramatic comeback in this year’s President Cup this is a session they simply have to win, but the task looks tough.

The Americans easily one the first foursomes session 4-1 and they did so with their abilities to be accurate off the tee and make crucial putts. This format really favours better players and it’s hard to see anything but an American sweep of the session.