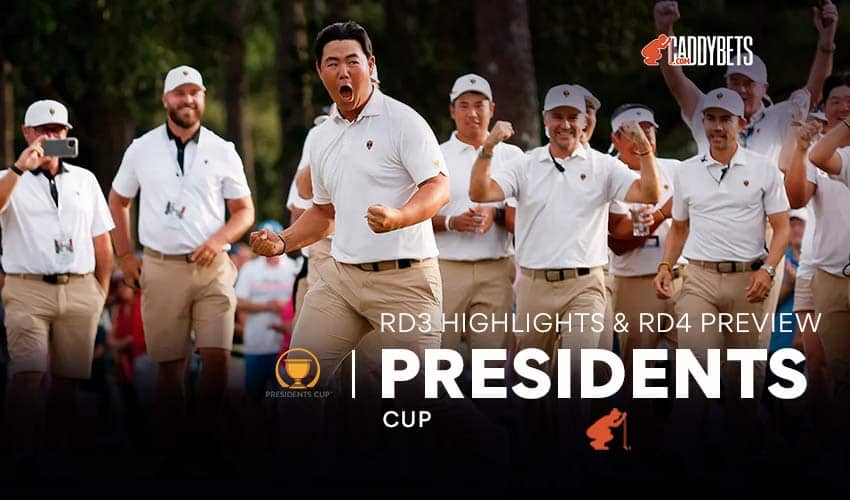 Three days of this year’s Presidents Cup are in the books and Team USA will take a four-point lead into today’s singles as they lead the Internationals 11-7. Here is our Presidents Cup Day 3 Recap & Round 4 Odds.

Saturday’s third day was the busiest of the week with eight matches being played across two sessions. Many headed into the day wondering whether the American team could create history and wrap up the victory before the final day’s singles.

With the first session kicking off with foursomes play, it certainly looked like the Americans were intent on wrapping the event up as quickly as possible.

Leading the US out were the duo Jordan Spieth and Justin Thomas. Despite both players still being comfortable in their twenties, both Spieth and Thomas have accrued serious experience in team events and seem to thrive in these types of conditions.

Heading into the contest against Sung Jae-Im and Corey Conners unbeaten, they produced yet another stunning performance to get the first American point of the day on the board with a convincing 4&3 win.

Looking to build on a convincing day 1 foursome win the duo of Collin Morikawa and Cameron Young looked to get their second victory as a pair as they tackled the experienced International pair of Adam Scott and Hideki Matsuyama.

Both Scott and Matsuyama had struggled but produced when their team really needed it producing an assured display to run out 3&2 victors.

American captain Davis Love III kept faith with his pairing of Scottie Scheffler and Sam Burns despite the Americans not yet winning a match. Against the combination of Tom Kim and KH Lee the Americans started as heavy favorites.

Tom Kim has been a tournament sensation and at just twenty years old looks set for a huge future. Leading his more experienced teammate, the South Korean duo was impressive as they held their nerve to win 2-1.

The final match of the session saw Max Homa and Tony Finau take on Si Woo Kim and Cam Davis. Needing to win to restore session parity, the Americans were far too strong wrapping up victory easily, winning 4&3.

With the score standing at 10-4, the Internationals knew they had to win the final fourballs session convincingly to stand any chance of victory heading into the final day.

First up was the previously unbeaten team of Xander Schaufelle and Patrick Cantlay taking on the combination of Si Woo Kim and Tom Kim. Showing all of the battling qualities that the situation demanded, the South Koreans produced some stunning golf to claw back the American’s early lead. The match would come down to the last hole where Tom Kim showed signs of composure beyond his years to win the hole and the match for the International team.

Parity in the session would be restored when once again the team of Thomas and Spieth was far good for the International pairing of Taylor Pendrith and Hideki Matsuyama.

However, the Internationals would sneak ahead again thanks to Sebastien Munoz and Sung Jae-Im winning their second fourballs match of the week when they dispatched the tricky duo of  Tony Finau and Kevin Kisner 3&2.

With the tourists leading the session 2-1, the final match of the day would be huge. It was looking bleak for the International pair of Adam Scott and Cameron Davis who found themselves a stroke behind Sam Burns and Billy Horschel heading into the closing holes.

Needing to produce something special it was Cam Davis who provided the spark, eagling the 16th to level the match before then producing a birdie, birdie finish on 17 and 18 to win the match by one.

With the bagging of that crucial point it still leaves the Internationals with a lot to do but with all the momentum on their side, the fourth and final day could be special.

With the group sessions of foursomes and fourballs now over, each one of the twelve-man teams will tee it up for singles action. The equation is simple, the Americans need 4.5 points to retain the Presidents Cup whereas the Internationals need 8.5 to win it for only the second time.

Here is the order of play and some predictions. All odds are courtesy of JazzSports.