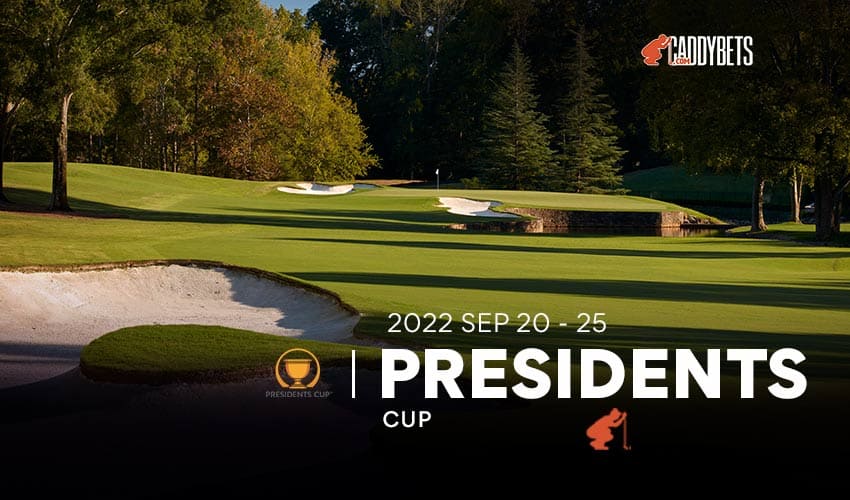 This year’s event takes place at Quail Hollow Club in Charlotte, North Carolina. It opened in 1959 and has had several redesigns over the years, most recently from 2014-16. It hosts the Wells Fargo Championship each year on the PGA Tour and also held the PGA Championship in 2017, which was won by Justin Thomas.

The finishing holes (16-18) are known as The Green Mile—a challenging par 5, par 3, and par 4 to finish up a round. These holes are being moved up to 13-15 for the Presidents Cup to ensure that these signature holes come into play and matches don’t finish before reaching these holes.

The Presidents Cup is a series of match-play competitions, formatted after the Ryder Cup. There are five matches each on Days 1 and 2, eight matches on Saturday, and then 12 matches contested on Sunday. The winner of each match (most holes won over 18 holes) earns a point for his team. In the case of a tie, each team earns one-half of a point.

A total of 30 points are available over the course of the tournament, so a team needs 15.5 to win. Twelve of those 30 points are available on the final day, so the individual matches on Sunday take on extra significance. Teams for the first three days of competition are decided by the team captains—Davis Love III for the U.S. and Trevor Immelman for the International side.

Besides the American team having a great record in this event, the International team has been a victim of circumstances over the past few months. Players who join the rival LIV Golf circuit have been indefinitely suspended by the PGA Tour, and that includes eligibility for the Ryder Cup and Presidents Cup.

Players like Cameron Smith, Joaquin Niemann, Marc Leishman, Louis Oosthuzien, and Charl Schwartzel would’ve been either a lock or under strong consideration for the team before the suspensions went into effect.

The U.S. side did lose some potential candidates in Dustin Johnson, Bryson DeChambeau, Brooks Koepka, and Patrick Reed, but Johnson would’ve been the only lock of that group.

Both teams are the youngest in the history of the competition (29.6 for the U.S. team; 28.8 for the Internationals), but Immelman’s squad features eight rookies out of the 12 competitors, which is also a record for this event.

Starting with Scottie Scheffler at No. 1, there are 10 members of the U.S. team in the Official World Golf Rankings before you reach the first International team member (Hideki Matsuyama at No. 17).

Coupling those factors with the fact that the U.S. team is on its home turf, they are heavy -650 favorites to win the event.

Is a slight favorite to post the best overall score in this event. Scheffler, who had a career year by winning the Masters, three other tournaments, and finishing runner-up to Rory McIlroy for the FedEx Cup at the Tour Championship, is making his Presidents Cup debut, but he was tremendous as a rookie in the Ryder Cup last year, going 1-0-1 in three matches.

Will no doubt be paired together, as they are close friends and won the Zurich Classic of New Orleans this year, which is the PGA Tour’s only official team competition on the schedule.

Won the biggest prior event at Quail Hollow, the 2017 PGA Championship. He hasn’t teed off on this course since, but he does have a seventh-place finish at the 2015 Wells Fargo Championship to his credit as well.

Homa campaigned for this spot hard and proved his worth by winning the Fortinet Championship last week. Finau wasn’t at his best at the Ryder Cup last year, but he’s playing the best golf of his career with two wins in July, a top-five at the FedEx St. Jude, and then a top-10 finish at the Tour Championship.

Is a veteran of the team wars; this is his fourth Presidents Cup, which gives him the most experience over any other teammate. He’s also 5-0-0 in team matches in this event.

On the International side

Hideki Matsuyama and Sungjae Im are the highest on the odds board. Matsuyama has been battling neck and wrist issues, but those can be masked in four-person matches. Im is a birdie machine and is one of the hottest golfers coming in, finishing runner-up three times in his last five starts, including tying Scheffler for second at the Tour Championship.

Other International players to be on the lookout for include Joo Hyung “Tom” Kim and Adam Scott, both at +2000. Kim, 22, showed he can come through in the clutch when he had to win the Wyndham Championship last month to qualify for the FedEx Cup playoffs, and he did just that. Scott had a strong run to the Tour Championship, finishing fifth in both playoff events to advance, and he has the experience edge by playing in his 10th Presidents Cup.

For a longshot, Kevin Kisner (+3500) is a match play whiz, posting a win and two runner-ups in the last five WGC-Match Play tournaments. He also owns a sixth at a Wells Fargo Championship and was seventh in the 2017 PGA.

There’s not much value in picking the U.S. team to win. If you’re looking for a longshot to bet on, wagering on a tie might be more likely than an International team win. Individually, we like Scheffler, Thomas, Homa, and Im and Tom Kim.

Here are the latest odds courtesy of Jazz Sports for the 2022 Presidents Cup, including overall team odds and top player props.