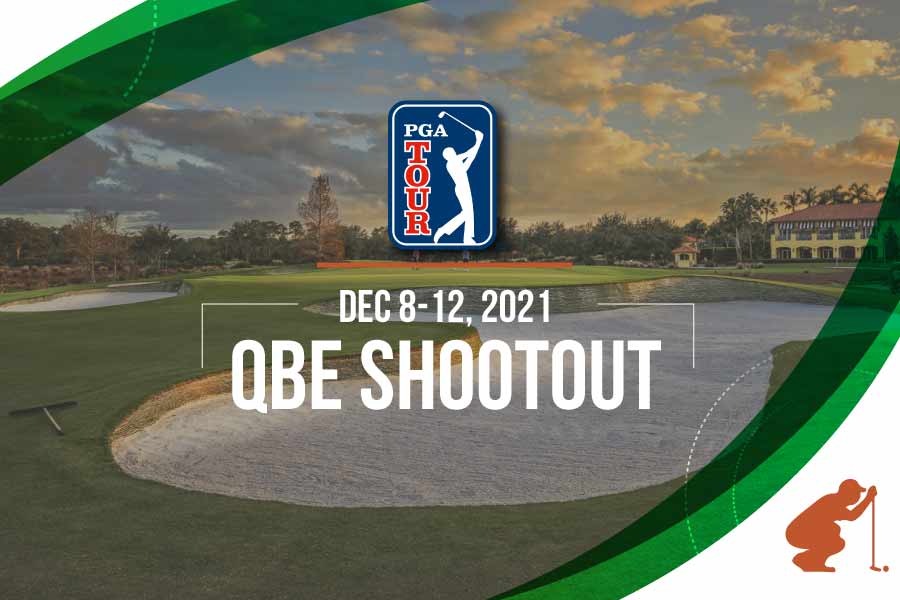 After a wild Sunday at the Hero World Challenge in the Bahamas last week, one final unofficial money event remains on the PGA Tour schedule for 2021—the QBE Shootout, a three-day event where teams of two face off at Tiburon Golf Course in Naples, Florida for a $3.5 million purse.

The event is hosted by Greg Norman and was originally called the Shark Shootout when it began in 1989 with Mark O’Meara and Curtis Strange winning the inaugural event. The tournament was held at Sherwood Country Club in Thousand Oaks, California until 1999. After that, it moved to Doral for one year before settling in on the Norman-designed Gold Course at Tiburon starting in 2001.

Harris English and Matt Kuchar are the defending champions, having won the event a record-tying three times. Brad Faxon and Scott McCarron have three wins as a duo, and Kenny Perry also won three times but with different partners. English and Kuchar also won in 2013 and ’16 along with runner-up finishes in ’14 and ’15. In last year’s win, English and Kuchar also broke the tournament record of -34, which stood since Fred Couples and Raymond Floyd shot a 182 at Sherwood in 1990, by shooting a 37-under 179, defefating Rory Sabbatini and Kevin Tway by nine strokes (also a tournament record for margin of victory).

Needless to say, they’ve got this event figured out. But there are some solid challengers, including Sam Burns—one of the most consistent golfers during the fall portion of the FedEx Cup season—as he teams with Billy Horschel as the betting favorites.

The event begins on Friday and is contested over three rounds (54 holes) of stroke play. Each round contains a different format.

The first round is a scramble, meaning that each player hits from where they believe the better shot of the two lies.

Round three is a fourball (better ball) format. In this round, each golfer plays their own ball independently, and the team gets the score of the golfer who scored the best on the hole.

The Tiburon Golf Club is located at The Ritz-Carlton Resort in Naples and also hosts the LPGA CME Group Tour Championship on the sister Black Course. Both courses were designed by Norman to complement the natural setting, so the course features plenty of water and waste bunkers.

The Gold Course is a par 72 and measures 7,382 yards. It opens with a long par 5 that is reachable in two by cutting the distance over the water. It wraps up with one of each par. The 16th is a 205-yard par 3 that penalizes those who end up short with a bunker shot. Seventeen is a reachable par 5, and the 18th is a 485-yard par 4 that has a generous fairway, but the second shot to the green is tricky due to water and bunkers that protect the putting surface.

Warm weather and calm winds are expected throughout the event.

Can Anyone Challenge English and Kuchar?

Despite their success here, Harris English and Matt Kuchar are third on the odds board at +650. English had a solid 2021 and was on the winning U.S. Ryder Cup team, but coming back after back injury has proved difficult. He was 14th last week at the Hero World Challenge, the first time that he played four rounds of golf since the Tour Championship. He did shoot a 63 on Saturday in the Bahamas, but also posted a 75 in round one. He missed the cut at the Shriners Children’s Open and The RSM Classic and also withdrew from the CJ Cup after three rounds. After winning this event last December, he won twice in 2021 (the Sentry Tournament of Champions and the Travelers Championship). He also had two top-five finishes in majors and led the WGC-FedEx St. Jude Invitational after rounds one through three before faltering on Sunday.

Kuchar last won an official event in 2019 but is one of six golfers to reach the FedEx Cup playoffs in each of its first 15 years of existence. He has four starts on tour this season, making the cut in all events with a best finish of 22nd at the World Wide Technology Championship at Mayakoba last month.

Burns is in second place in the FedEx Cup standings after recording top-seven finishes in three of his four official starts this fall, which includes a win at the Sanderson Farms Championship in October. The only time he finished outside the top ten was a 14th at the Shriners Children’s Open. At the Hero World Challenge last week, he finished tied for third and could’ve won if it wasn’t for a triple-bogey on the 14th hole that saw him have to chip five times to overcome a false front on the green. Horschel’s only start on the PGA Tour this fall was at Mayakoba, where he finished tied for 33rd. He did win the BMW PGA Championship, one of the most prestigious events on the European Tour, and fell just short in his attempt at becoming just the third player to win the FedEx Cup and the season-long Race to Dubai competition on the European Tour. He’s participated in this event eight times, placing fifth or higher in six of those.

Is the other twosome favored ahead of English and Kuchar, currently sitting at +500. This is the first time they’re teaming up, but they have three top-three finishes combined here. Kokrak was victorious in his last tournament, winning the Houston Open after winning twice in the 2020-21 season. Na hasn’t played since the CJ Cup, as he’s been resting a rib injury. He was a runner-up here last year and ended the 2021 season with three top-10 finishes in four starts, including a second at the Wyndham Championship and a third at the Tour Championship.

Corey Conners and Graeme McDowell is a first-time pairing, but McDowell has been close to sniffing a win with other partners in the past. The Englishman has three runner-up finishes here (2010, 2017-18) with Darren Clarke, Shane Lowry, and Emiliano Grillo. Conners has two top-25 finishes in three starts this fall and came in sixth here last year in his only showing at Tiburon.

Max Homa and Kevin Kisner (+750)know how to have fun on the golf course, and this event is all about fun. Homa also has a win in the season-opening Fortinet Championship, and nothing makes a good time even better by playing great golf.

Jason Day and Mark Leishman are at +800. The duo is back together after finishing eighth here last year, and Leishman won the Zurich Classic, also a team event, with Cameron Smith earlier in 2021.

A bit further down, keep an eye on Sean O’Hair and Will Zalatoris. O’Hair has won this event twice, both times with Steve Stricker. He was set to partner with the Ryder Cup captain again, but Stricker withdrew due to illness and was replaced by the reigning PGA Tour Rookie of the Year.

Due to the unique nature of the tournament, LPGA stars are no stranger to the event. After Annika Sorenstam became the first woman to play in the event in 2006, Lexi Thompson plays this year for the fifth time. Bubba Watson is her playing partner. She finished eighth here in the season-ending LPGA event last month and was tied for fourth in this event with Tony Finau in 2017. Watson teamed with Louis Oosthuizen to finish fifth here last year, so despite having the longest odds in the field (+3000), there’s no reason they can’t compete.

We see things coming down to the defending champs (English and Kuchar) and Burns and Horschel, as English has a playing partner to mask some issues while he ramps back up from his injury. We also like the duo of O’Hair and Zalatoris, as the format can accentuate Zalatoris’s strengths and limit mistakes due to having a playing partner who has won this event twice before. And who can’t resist a small wager on the Thompson/Watson pairing for such a nice reward in the limited 12-team, no-cut field.

Sign up and make sure to stay tuned for QBE Shootout, PGA golf news and PGA Tour schedule