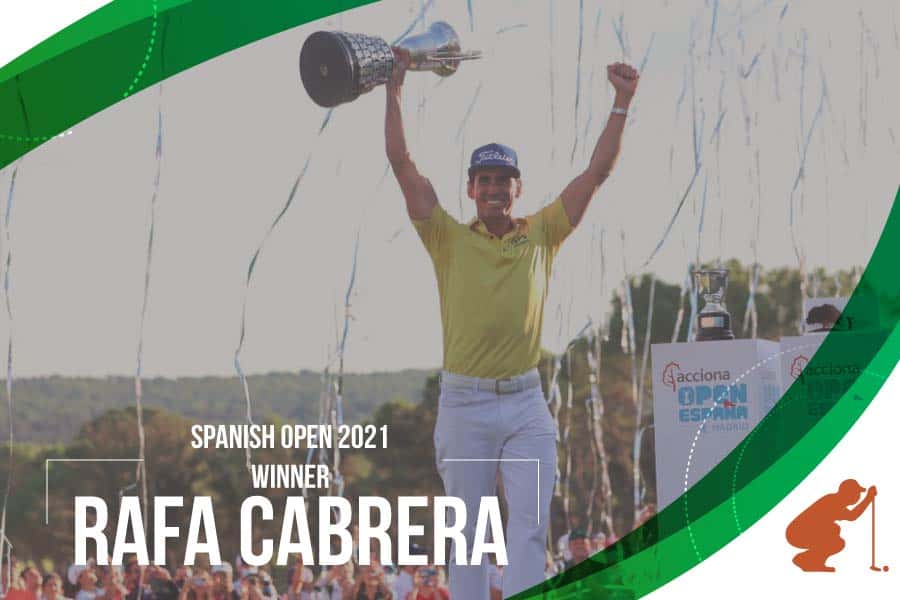 Rafa Cabrera Bello at the top in the Spanish Open 2021

Coming into this week’s Open de Espana (Spanish Open) at Club de Campo Villa de Madrid, Spaniard Jon Rahm was the overwhelming favorite. He started well in the first half of the tournament, but a 72 on Saturday put him well behind the leaders, and his 69 on Sunday left him six shots back of two fellow countrymen who went into a playoff to determine the winner who would join those like Rahm, Seve Ballesteros, Sergio Garcia, and Miguel Angel Jimenez as a winner of his country’s national open. In the end, Rafa Cabrera Bello topped Adri Arnaus in that playoff to win his first tournament in four years.

Rafa Cabrera Bello led by two strokes going into Sunday’s final round, but Arnaus quickly tied him after a double-bogey on the first hole by Cabrera Bellow, and Arnaus led at the turn. Cabrera Bello got back into a share of the lead by birdieing three straight holes from Nos. 13-15, but it looked like Arnaus would escape with the victory after Cabrera Bello hit his approach shot into a bunker. But Cabrera Bello was able to get up and down to save par and force the playoff.

On the first playoff hole, both men hit their tee shots to the left, but Rafa Cabrera Bello had a better approach and left his third shot 11 feet of the 18th hole. He sunk the par to win the tournament at 19-under.

“I’m very, very happy. I knew it was going to be a really hard battle today, and I don’t think I need to say that I didn’t get off to the best start,” Cabrera Bello said after the round. “It was definitely one trophy that was on my bucket list. To join my name to all those champions…it’s very, very special.”

It was a long journey back for Cabrera Bello, who was on the 2016 Ryder Cup team and was ranked 34th in the Official World Ranking after finishing second to Rahm at this event in 2019. But as happens to many golfers, Cabrera Bello said that he felt lost at times in the two years that followed, and his ranking dropped to 231st. But he said he knew that he could turn things around at this event, having won it at every amateur level he competed in from ages 7-18, and now he’s won it as a professional as well.

Now that he’s back in winning form, Rafa Cabrera Bello hopes that he can use the momentum to return to playing better golf consistently.

“I came here in a pretty bad place with scores being not what I expect them to be and to be able to get momentum and turn it around and to walk out of here with a win means a lot to me. Hopefully, I can keep going and get back to the player I know I can be.”

It was just the fifth tournament Cabrera Bello competed in since the U.S. Open in June. His 50th-place finish at the U.S. Open was also his best finish until this week’s win. He missed the cut at The Open Championship in July and at last week’s Alfred Dunhill Championship, and he was tied for 67th at the BMW PGA Championship last month. This win was his first top-30 finish since finishing fourth at the Abu Dhabi HSBC Championship in January.

After two wins on the Challenge Tour, Rafa Cabrera Bello claimed his first European Tour win at the 2009 Austrian Golf Open. He won again at the Omega Dubai Desert Classic in 2012 and at the 2017 Scottish open.

Arnaus Comes Up Short in Bid to Win Home-Country Tournament

The 26-year-old Arnaus was in line for his first-career European Tour win in what would’ve been a memorable setting, but he couldn’t get a birdie in his final four holes after recording an eagle on No. 14 to put the tournament away.

“I felt like I played the golf that I wanted to come out and play,” Arnaus said afterward. “At the end, it was aggressive golf, trying to get all the putts to the hole having all my chances. It just wasn’t meant to be I guess, but I put myself in a good spot, and I can’t wait to do it again next week.”

Arnaus will try again in his home country at next week’s Estrella Damm N.A. Andalucia Masters, but it seems like that first win is not far away. He has four runner-up finishes in just 74 starts, and this was his first top-10 since a pair of them at the Canary Islands Championship and Tenerife Open in back-to-back weeks in May.

Rahm returned home to Spain not only as of the two-time defending champion of this event and trying to tie Ballesteros’ record of three in a row, but he also won the U.S. Open and is now the world’s top-ranked golfer. That led to galleries that were reminiscent of Tiger Woods’ heyday in popularity levels. Rahm shot a 63 on Thursday, but non-stellar rounds after that relegated him to a 13-under finish that left him tied for 17th.

But despite the disappointment on the course, Rahm delighted the fans by signing autographs well after his round ended.

“I’m going to sign [for] all the children, no matter how long it takes,” Rahm said after his round. He will also be headed to the Estrella Damm N.A. Andalucia Masters next week

Recapping the Rest of the Field

Behind Rafa Cabrera Bello and Arnaus was a three-way tie for third place with Scot Grant Forrest, Frenchman Julien Guerrier, and Shubhankar Sharma of India at 17-under, two shots back of the winner. Another trio was tied for sixth in Wil Besseling, Wilco Nienaber, and Jack Senior at 16-under, while Richard Bland, Renato Paratore, and Marc Warren finished tied for ninth at 15.