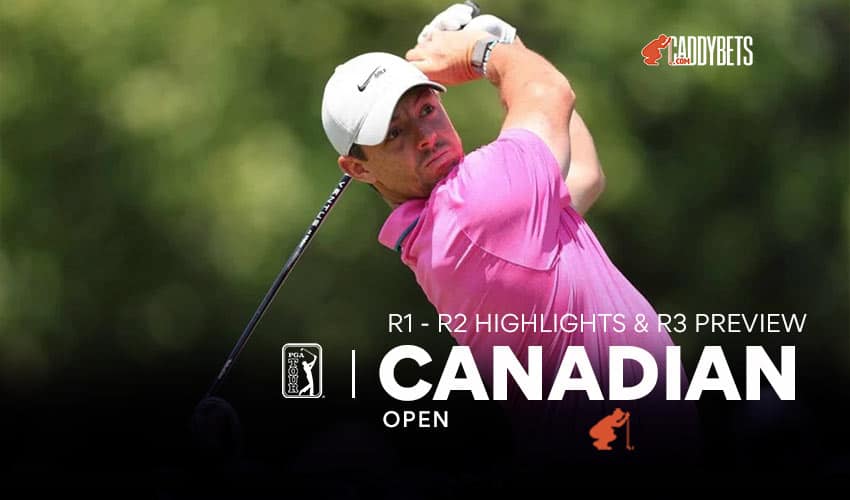 In what has been a historic week in the world of golf, the PGA Tour will be delighted that the RBC Canadian Open is wide open.

Returning back to the PGA Tour roster for the first time in three years due to the COVID pandemic, the first two rounds of the Canadian Open showed why the PGA Tour is the greatest professional golf tour in the world.

After two eventful rounds, twenty players find themselves within four strokes of the lead.

Top of the pile with a score of -7 is Wyndham Clark. Clark holds a one shot lead over five players back on -6 which include Matt Fitzpatrick and defending champion Rory McIlroy. Sam Burns, Shane Lowry and world number one Scottie Scheffler all find themselves nicely positioned just three strokes behind.

On a tough day to score, it was Clark who preserved his 1st round lead with a battling even par round of 70. With the closing holes of the course playing exceptionally difficult, Clark held his nerve holing crucial putts on 17 and 18 to ensure he would enter the weekend with a slender lead.

Matt Fitzpatrick, who is arguably the best player on Tour yet to record a PGA victory looked to be the man who would head into the weekend with the lead. However, the closing holes would catch the Englishman out and Fitzpatrick dropped five strokes in his last four holes to end up sitting one shot behind Clark.

Rory McIlroy is a huge fan of this tournament and looks to have the bit between his teeth. McIlroy is one of the Tour’s staunchest defenders and with the threat of the LIV Golf series, a win for McIlroy would be warmly welcomed by all associated with the PGA Tour.

Will fancy his chances of overhauling current leader Wyndham Clark at the top of the leaderboard.  Whilst others were struggling to close out their rounds, McIlroy had the ball under his spell. The Northern Irishman finished with two birdies in his final four holes, and will look to continue his momentum today.

The main dangers might lurk from further back. Sam Burns is quickly establishing himself as one of the best players in the world. A winner in his last start at the Charles Schwab challenge, Burns was able to overhaul a seven stroke deficit in the final round. Lying three behind won’t hold any fears for the American and odds of +1200 could be the value bet of the day.

The man Burns beat to the Charles Schwab title was world number one Scottie Scheffler. Scheffler (+650) is looking for a remarkable 6th win of the season and will be aiming to make some serious headway today.

A lurker down the field and another dark horse for the tournament could be Justin Thomas. Thomas will start his round 5 shots behind Clark but won’t be intimidated by that at all. Thomas was able to claw back five shots on his way to winning his second major at the US PGA and odds of +2000 look very tempting.