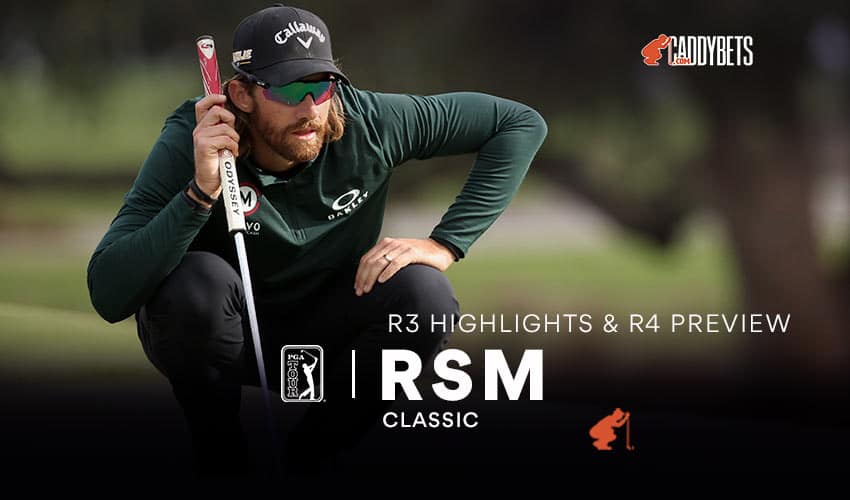 The American duo of Ben Martin and Patrick Rodgers head into today’s final round at the RSM Classic with a one-stroke lead. The tournament is anything but over as twenty-five players will start the day within four strokes of the lead. Check out our RSM Classic Final Round Betting Preview!

Moving day lived up to its name yesterday with a whole host of players shooting low to catapult themselves into tournament contention.

Starting the day as co-leaders, Harry Higgs, Andrew Putnam, and Cole Hammer were all looking to assert their lead but suffered differing fortunes. Four dropped shots in three front nine holes saw Hammer tamely fall away and he will start the day four shots back. Higgs suffered a similar fate with two dropped shots in his first three holes but rallied well with three birdies on his back nine and will start the day two off the pace.

It was Putnam who fared the best of yesterday’s leaders with the American shooting one under to sit just one shot behind the leaders.

Played amidst tough conditions, Ben Martin played one of the rounds of his career to sit at the top of the leaderboard. Three birdies on the front nine were supported with three on the back and had it not been for a dropped shot on the last he would have started the day with a one-stroke lead.

Patrick Rodgers headed into the week in some really good form following a third-place finish in the Bermuda Championship and two top-twenty finishes at the Bermuda Classic and World Wide Technology Open. Looking to land his first career win, Rodgers third round got off to a rocky start with a dropped shot on his second hole, however, he didn’t let it bother him and seven birdies in his final 15 holes would see the American shoot a stunning -6 and start today in the joint lead.

The lowest round of the day belonged to Adam Svensson with the Canadian shooting a flawless -8 which included an eagle on the 15th to see him head into today trailing by just one shot.

With the potential of a dramatic final day, there is still plenty of value to be found if you are looking to place a bet on today’s final round.

Following his stunning display yesterday it is Patrick Rodgers (+500) who will start the day as the tournament favorite. Rodgers has been in contention before but it will be interesting to see how he handles the pressure ahead of what could be a landmark day.

Andrew Putnam (+750) has been right up with the pace over the last few rounds and despite not being able to convert some birdie chances yesterday, his steady play enabled him to stay at the top of the leaderboard with many faltering around him. It’s been over four years since Putnam last tasted tournament success and he will be desperate to set that record straight today.

Some value could be found in backing Adam Svensson (+1400). The Canadian starts the day in red-hot form and will be looking to bring that momentum into today’s final round.

Brian Harman (+1400) regularly flies under the radar but was one of the highest-ranked players entering the week. Harman has steadily worked his way into contention and had it not been for two dropped shots on his back nine yesterday he could have started the day in the lead. Odds of +1000 could prove a steal.

With so many players in contention and capable of making a final-day charge, backing the field could be a viable option. This would mean any player not featured in the list below would be included in your bet. With there being plenty of chances to shoot low it could be a really sensible play.

Follow us on Social Media for more RSM Classic Final Round updates!