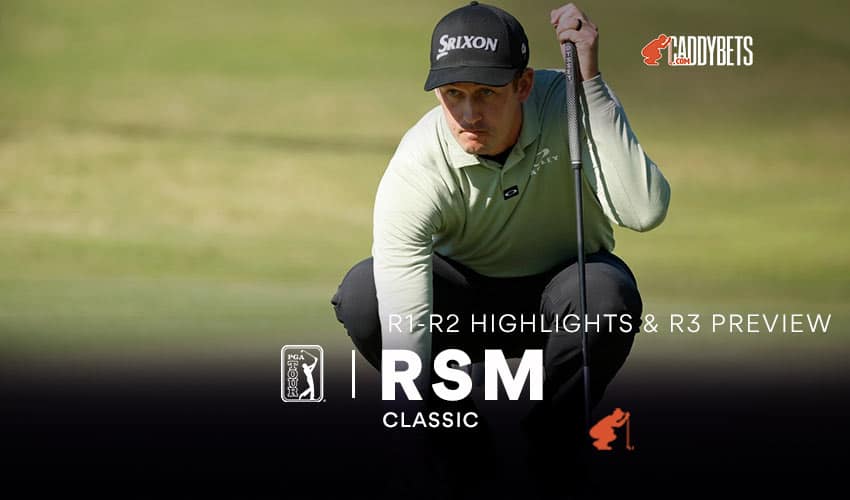 American players have dominated through the first two rounds of the RSM Classic with three players leading the way on -12. Here our RSM Classic Round 1 & 2 Recap

Cole Hammer, Andrew Putnam and Harry Higgs will all start the day one stroke clear of Beau Hossler, Sahith Theegala and Joel Dahmen.

It was Hammer who led heading into the second round following a superb opening round of 64. With the weather on the opening day surprisingly cool and chilly, Hammer’s first day performance was out of the top drawer.

He backed that up nicely yesterday to maintain his position amongst the leaders with a solid -4 68. Despite a wobble on the front nine where Hammer dropped three shots, he responded well to pick all of those strokes up on the back nine. A recent graduate from Texas University, this will be Hammer’s first ever outing in a final group at this level.

Joining Hammer in today’s final group are the experienced pair of Harry Higgs and Andrew Putnam. Both launched themselves into contention yesterday with a pair of 65’s.

Despite relatively slow starts, both Putnam and Higgs have been in superb form dropping just one stroke through their first 36 holes. With some big names in and around them they will need to produce something similar today if they are to stay at the top of the leaderboard heading into tomorrow.

Joel Dahmen, Sahith Seegala and Beau Hossler will all be hoping to end the day leading the tournament. All three are used to contending and they will be hoping to make an early dent into the one shot deficit they currently face.

27 players will start the day within five strokes of the lead and even those further back will believe they still have a chance of victory. With so many possible contenders, the betting for today’s third round is loaded with value.

Current favourite is Andrew Putnam. Putnam is without a win since 2018 but did recently finish second in the ZoZo Championship. He has made the cut in his last seven tournaments and will be hopeful of recording another top ten finish.

Joint second in the betting are the pair of Joel Dahmen and Sahith Theegala. Theegala rose up the ranks of the PGA Tour last season and recorded the most birdies out of any player on Tour. Theegala has managed a string of runner up finishes and will be hoping he can win his first PGA tournament this weekend.

Joel Dahmen entered this week following two successive top ten finishes and he finds himself bang in contention once again. Dahmen has developed into a consistent performer and will be wanting to land his second PGA title this weekend.

Outside of the top three, Seamus Power could be a great value angle. The Irishman finds himself at a career high ranking of thirty and headed into this week following a win in Bermuda and a third place finish in the World Wide Technology Championship. Power finds himself four back and odds of +2200 could be one of the best bets of the day.

Follow us on Social Media for more RSM Classic Round 1 & 2 Recap!