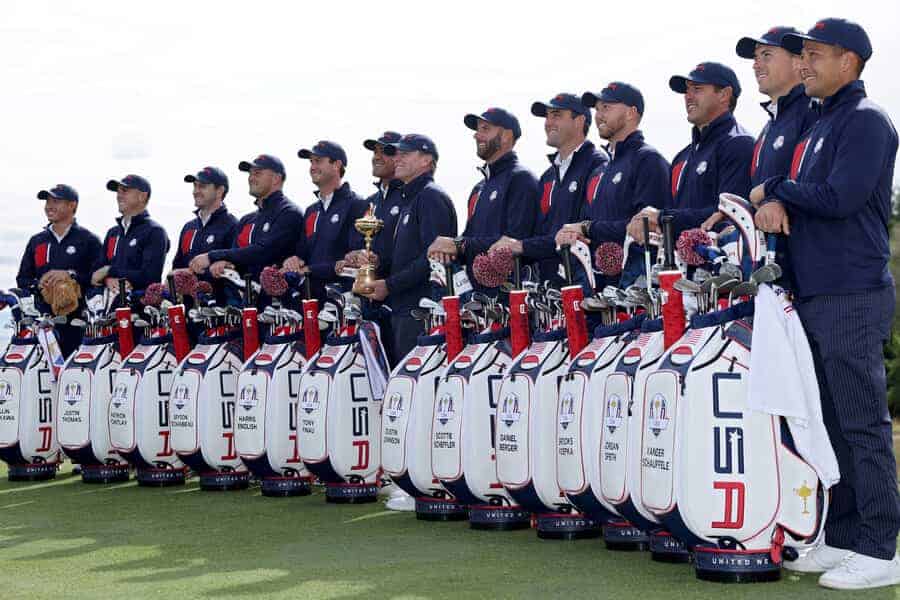 Three years ago in Paris, France, do you remember when Team Europe absolutely destroyed Team USA in the Ryder Cup? Well, if yesterday was any indication, Team USA either doesn’t remember, or they took the three years in between that beating to use it as motivation by rolling to a commanding 6-2 lead on the first day of the 2020 Ryder Cup Recap Day 1

With the winding whipping off Lake Michigan, making these PGA Tour pros look like me on a public course, Whistling Straights played like a traditional links course in Scotland. The whole day was perfect if you are an avid golf fan, from the grandstands on the first tee to the beautiful 18th hole, to views of the infinity edge greens bleeding off into Lake Michigan, and Team USA living up to the odds of being the favorite to win as projected by Jazzspsports.ag/*.

Before we get into the recap of both the morning and afternoon sessions… Did you see that shot by Jordan Spieth? Or the multiple blasts by Bryson DeChambeau? If you didn’t, then google them because they are unreal. That flop shot was launched by 75 feet into the air, and then Spieth dramatically had to prevent his momentum from taking him into Lake Michigan. Not to be outdone in the afternoon 4-ball session, Bryson decided to take a creative line on the par-5 5th hole and blasted his drive 417-yards, leaving him just 72 yards to the hole, which he stuck to four feet, tapping in for an easy eagle.

Team Europe had four birdies on the front nine – riding the hot putter of Rahm and favorite on total points as projected by Jazzsports.ag/*. Team USA cut their deficit to two on the 13th, but Team Europe answered on the 15th when Garcia drained a 24-footer to take a 3-up lead with three holes to play. With the victory, Garcia tied Nick Faldo with 23 matches won overall, the most in Ryder Cup history, and extended his career points record to 26.5.

The duo of Johnson, USA’s oldest player at 37, and Morikawa, a rookie, was too much for Casey, and Hovland, another rookie. The match was tied after six holes, and the Americans took a 1-up lead after the Europeans bogeyed the par-3 7th and never looked back.

Berger and Koepka, former Florida State teammates and close friends, took a 2-up lead with birdies on Nos. 2 and 3, but a bogey on the ninth put things back to even at the turn. Then they shut the door on Westwood and Fitzpatrick the rest of the way.

The American rookies looked like the most polished American team beat up on the European duo immediately. They were quickly 5-up after only five holes, and McIlroy struggled with his iron play, and the Europeans could never get back into the match.

Schauffele birdied two of the first three holes, then DJ added another one on the par-five fifth to take a 3-up lead. The Europeans clawed their way back to 1 down at the turn before Johnson had three straight birdies on Nos. 10-12.

Talk about setting a tone, Tony Finau drained a 39-foot birdie on the first hole and then added six birdies, but Lowry and McIlroy were somehow able to hang around. The match was tied after seven holes, but the Americans won three consecutive holes, and Finau’s birdie on the par-4 13th stretched their advantage to 4 up.

In the most competitive match of the afternoon session, neither side took more than a one-hole advantage. DeChambeau’s 5-foot par save on the 15th hole put the Americans ahead one up after Rahm had missed a 5-footer for par. The Americans held off the European duo on the 17th hole, but Hatton made a 7-foot birdie on 18 to grab a half-point for the Europeans.

The Europeans looked to run away with this one by staking a 3-up lead on Fleetwood’s birdie on the par-4 eighth hole, but the American duo dug in and cut the lead to 1 up after Thomas’ birdie on the par-4 ninth and Cantlay’s birdie on the par-3 12th. Then, on the par-5 16th, Thomas reached the green in two with a 282-yard shot with a 3-wood into a 25-mph wind and then dropped a 17-foot eagle putt to tie the match with two holes to go where it ended in a tie.