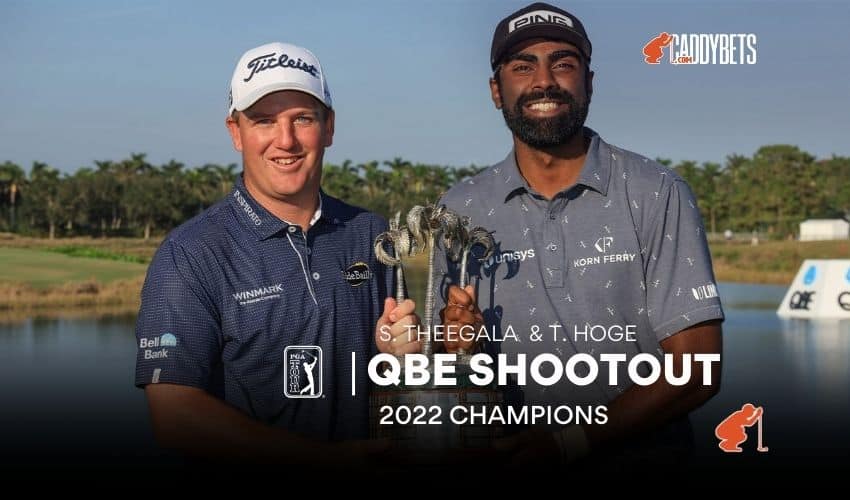 Theegala, Paired With Hoge, Tastes Victory for the First Time at QBE Shootout

Even though it was an unofficial event, Sahith Theegala closed out a victory on the PGA Tour after some close calls in his rookie year on the circuit. The 25-year-old paired with Tom Hoge, who won the AT&T at Pebble Beach earlier this year, and became the first rookie team to win the QBE Shootout 2022 since Keegan Bradley and Brendan Steele did so in 2011.

Theegala gutted his way through the final round, which was a best-ball format where the lower-scoring teammate counted his score on the hole, after pulling a muscle in his side on the first tee.

He was able to recover as the round went on, and his 15-foot birdie putt on the 18th hole was the winning putt.

“It just felt great to contribute a little bit,” Theegala said. “Tom was really holding me up pretty much all around, he made so many really big putts.

“I had to check with Tom later in the round to see if his back was okay from carrying me,” Theegala joked.

Hoge said that he wasn’t surprised Theegala played through the pain to go for the win, even though this wasn’t a FedEx Cup points-paying event.

“I don’t care what you’re playing for, it’s always fun coming down the stretch there,” Hoge said.

It’s another step towards the first true win for Theegala, who had chances to win on the final hole twice last season, settling for runner-up at the Travelers Championship and third at the WM Phoenix Open. He’s already logged three top-six finishes in the fall portion of the 2022-23 season with a best finish of second at the RSM Classic. Hoge also has two top-10s this season, capped by a fourth at the Shriners Children’s Open.

“It’s nice to get a taste of victory because it’s so hard out here,” Theegala said.

Ryan Palmer and Charley Hoffman set the 36-hole record at this event and held a two-stroke lead going into Sunday’s third round, but both missed birdie putts on 18 that would’ve forced a playoff. In contrast to the rookie duo, Palmer and Hoffman’s combined age of 91 was the oldest in the field.

Harris English and Matt Kuchar fell two strokes short of trying to win this event for a record fourth time, as they had to settle for third place. Max Homa and Kevin Kisner, pre-tournament favorites with English and Kuchar, finished fourth.

Nelly Korda, one of two LPGA golfers taking part, teamed with Denny McCarthy to finish fifth. Next year, each team will be comprised of one PGA Tour pro and an LPGA player.

A field comprised of 20 major winners will be playing with a family member at the two-day PNC Championship at the Ritz-Carlton Golf Club in Orlando this weekend before the pros take off for the holiday break. John Daly and son John Daly II are the defending champions, and Tiger Woods will be taking part once again with his son, Charlie.

Follow us on Social Media for more QBE Shootout 2022 updates!