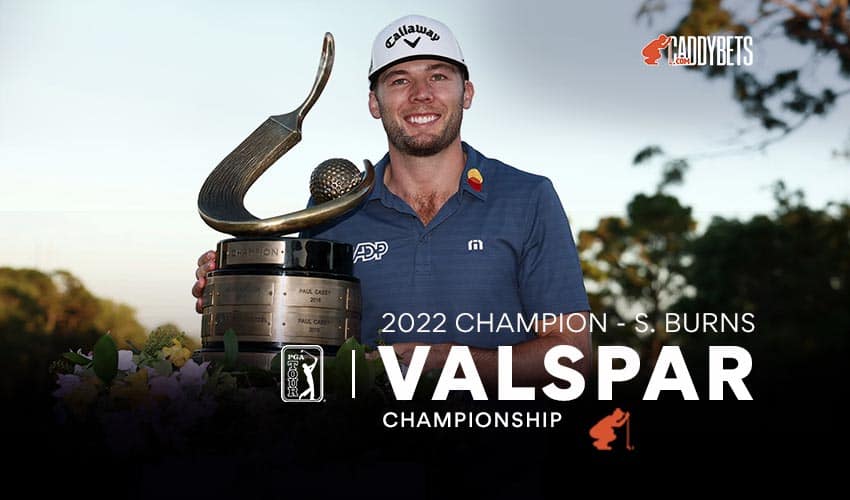 It was Burns who won here at Innisbrook Golf Club and Resort in the Tampa Bay area a year ago for his first-ever PGA Tour title.

Now Riley, a rookie, was going for his first title and led going into the final day of the 2022 Valspar Championship, and he found himself in a playoff with none other than Burns.

But it was last year’s champ who sunk a 30-foot putt for birdie on the 16th hole (the second hole of the playoff) to go back-to-back at Innisbrook, winning the final leg of the PGA Tour’s Florida swing for his third career victory and second of the season.

“Man, it’s crazy,” Burns said. “Davis played well today, especially the way he finished. I tried to stay steady. I didn’t make a lot of mistakes. A lot of time on Sunday if you plot your way around, make a bunch of pars, throw in a few birdies, a lot of times it works well. So happy.”

Riley led by two strokes going into Sunday’s final round, but a triple bogey on the par-5 fifth hole brought several in the field into contention, including Burns, Justin Thomas, Matthew NeSmith, Matt Fitzpatrick, and Brian Harman.

But Riley came back strong and actually had a chance to win on the 72nd hole, but his 15-foot birdie putt missed.

“I can’t hang my head about anything,” Riley said. “I played a lot of good golf and unfortunately I didn’t have my best stuff today and I stumbled on hole 5 today and that kind of cost me. But at the end of the day, it’s a great week to build on.”

Burns and Riley parred 18 a second time and headed to the par-4 16th, where Sam Burns sunk the winning putt.

After three rounds of calm conditions and low scores, Sunday saw more difficult conditions. Burns and Riley both finished with a 17-under 267. Burns shot a 2-under 69 on the day, while Riley recovered fairly well from the snowman on No. 5 to card a +1 72.

It was the third win in 10 months for Burns, who won this event when it was played in May 2021. He then won the Sanderson Farms Championship in the fall portion of the 2021-22 season, and this win puts him in second in the FedEx Cup standings and 10th in the Official World Golf Rankings.

Thomas and NeSmith tied for third at -16, one shot out of the playoff. Fitzpatrick and Harman were at -14 to tie for fifth, Sahith Theegala shot a 67 and tied for seventh with Stewart Cink, Kevin Streelman, Adam Hadwin, and Robert Streb.

Eight of the world’s top-10 golfers head to Austin, Texas this week for the WGC-Dell Technologies Match Play, which is the PGA Tour’s version of “March Madness.” Billy Horschel is the defending champion, and the tournament also marks the return of Bryson DeChambeau, who has missed the last several events due to injury.

Join us to receive our daily Golf content and make sure to stay tuned for the 2022 Valspar Championship updates, golf news, and PGA Tour schedule.