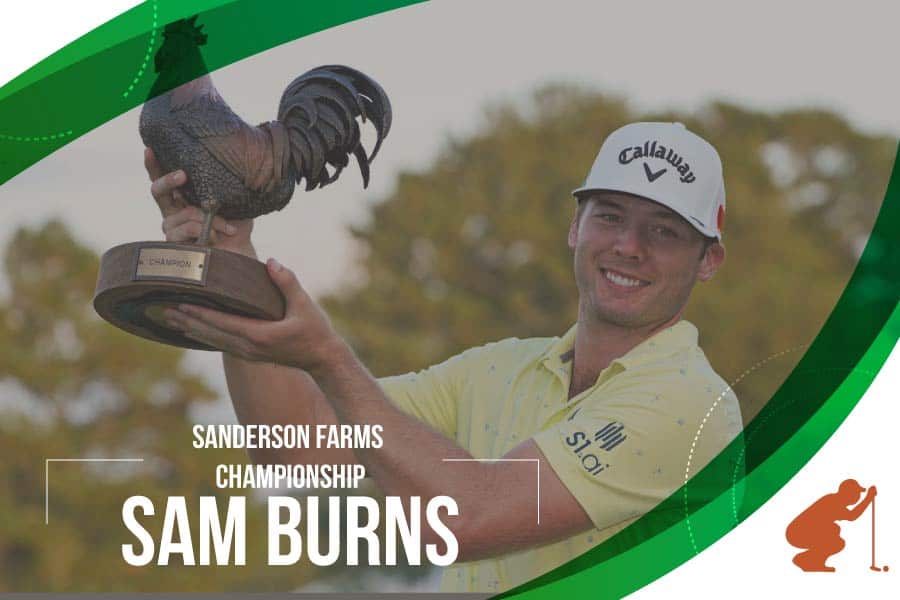 It’s fitting that a tournament held in a part of the country known for the powerful Southeastern Conference (SEC) came down to an LSU product from Louisiana winning over two of his former college rivals and several others looking for their first PGA Tour win. Instead, Sam Burns, who finished at a tournament-record -22, scored his second career victory.

Burns, at +1200 going into the tournament, was the odds-on favorite prior to Thursday’s first round. He was a shot behind Sahith Theegala, but the tide turned for both on the back nine. Burns birdied four of the five holes from No. 11-15, and Theegala bogeyed three of the first four on the back nine. His fade down the stretch resulted in an eighth-place finish at -19 for the California rookie. But it’s still a good showing for only his second start on the PGA Tour.

“I think I know what I need to work on and what I need to do moving forward,” Theegala said. “I did so much good stuff this week, and I’ll just try and build off the really good stuff and keep learning. A lot of it was mental today.”

Sam Burns built a two-stroke lead into the final hole, and he won by one shot over Nick Watney and Cameron Young after Burns bogeyed No. 18, which was more due to a conservative approach with a solid lead than anything else.

“I saw the leaderboard when I was on 17 green, and I kind of thought the guys behind us weren’t quite close enough to catch us, and I think that’s when it kind of hit me that if I could just get it up there around the green and make a 4 or 5, we could do it,” Burns said after the round. “The main thing for us as we knew what our game plan was, and we knew that we had a purpose for each shot, and we were just going to stick to it and whatever happened at the end, [happened].”

It’s the second win of Burns’ career after he won the Valspar Championship last March. He also finished the 2021 season strong, finishing second at the WGC-St. Jude FedEx Invitational and eighth at The Northern Trust. Sam Burns also ended up with an 18th-place finish at the Tour Championship and the final FedEx Cup standings.

The late-season charge put him into contention to earn a captain’s pick from Steve Stricker for the Ryder Cup, but it wasn’t enough. It did, however, prompt a call from Stricker that Burns is using for motivation for the 2021-22 season.

“I think getting the call from Stricker on Monday [after the Tour Championship] and hearing the news that I didn’t make the team was definitely very motivating and kind of gut-wrenching,” Burns reflected. “I think it’s definitely motivated me to try and be on the next team and continue to try and improve.”

And he certainly is improving—this victory put him into the top 20 of the Official World Golf Rankings for the first time.

Six of the last seven winners of the Sanderson Farms Championship were first-time winners on tour, and that would’ve been the case if a half-dozen other golfers had been able to defeat Burns.

Young, who went to Wake Forest and was a rival of Burns’ in college, was on pace until a bogey on the 14th set him behind. He ended up being able to rally and tie for second after an up-and-down on 18 that resulted in a birdie.

“I love being in contention; feeling the nerves, so it was fun today. I enjoyed it, even though it might not have looked like it,” Burns said. “I knew Sam was ahead of me, and I had to make a couple [great shots] and just didn’t, but I will another time.”

Watney has four wins to his credit, but none since 2012. He struggled mightily last year and worked with swing coach Butch Harmon over the summer in order to try and recapture the lost magic after a lower back injury and the resulting confidence loss. The early returns appear to point to a career resurgence, as he played a bogey-free round on Sunday, shooting a seven-under 65 to finish one stroke behind Burns. This coming after a 30th-place finish in the Fortinet Championship two weeks ago has gotten his season off to a good start.

“There were definitely some lean times, especially last year, but I’m not trying to think about that anymore,” Watney said following his round. “I’m trying to continue to get better and this was a great step this week. I’m ready.”

Hayden Buckley, who went to Missouri—another SEC school—was tied for fourth at -20 with Henrik Norlander, Andrew Landry, and Trey Mullinax. Veteran Si Woo Kim was tied for eighth, three shots back, along with Theegala and Seth Reeves.

Will Zalatoris, another Wake Forest graduate, shot a course-record 61 on Friday but could not capitalize on that momentum, shooting an even-par on Saturday and improved to a four-under 68 on Sunday to finish tied for 14th at -17. He was tied for 11th at the Fortinet Championship, so the defending Rookie of the Year on the PGA Tour is off to a solid start to his first year with a tour card.

As he could be one of the names to watch this year on the PGA Tour. In addition to the win last year, he led more times after 36 holes (five) than any other golfer last season, and he led four times going into the final round, which was tied for the most on tour with Jordan Spieth.

Being able to close out a win from behind should add to his confidence that he can close out more tournaments, so he may be a multiple-time winner this year and in contention at the majors as well. Expect his stock to rise in the next handful of tournaments he plays.

Follow us on Social Media for instant Sam Burns updates!