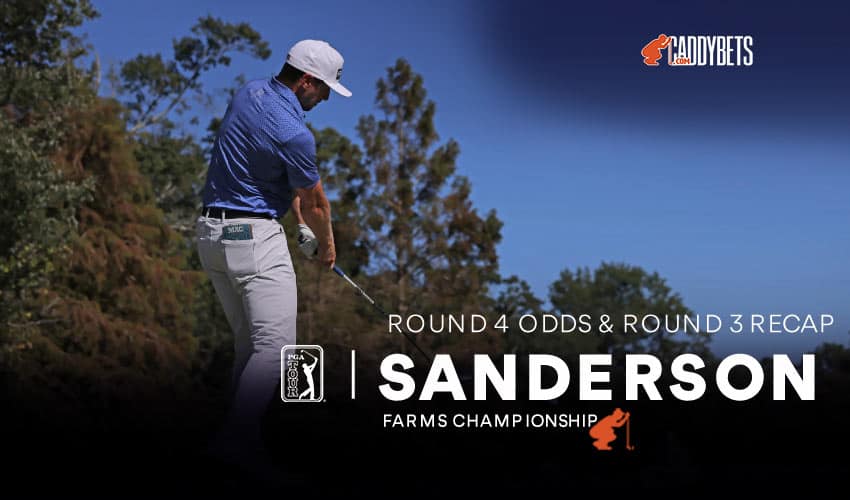 Once again moving day lived up to its name at this year’s Sandersons Farm Championships. Mark Hubbard fired a superb round of 65 to take him to the top of the leaderboard. Hubbard’s round included five consecutive birdies on the back nine and some gritty par saves. He leads round 3 leader Mackenzie Hughes by one single stroke. Here’s the Sanderson Farms Championship Round 4 Odds & Round 3 Recap.

Yesterday’s third round started with Hughes and Belgian player Thomas Detry leading the way on -10. In surprisingly blustery conditions Detry made a bad start bogeying two of his first six holes. A shot would be picked up on the 9th but given away again on the 16th. He would end up carding a disappointing 74 and will start today seven off the lead.

Things looked to be heading a similar way for Hughes who bogeyed his second hole but responded excellently by rattling in six birdies for the loss of just one other shot. His battling 68 gives him a real chance of lifting his second Tour title.

Sitting three shots of the pace are a trio of players which include South African Garrick Higgo, Scott Stallings, and the big-hitting Austrian Sepp Straka.

Both Higgo and Stallings produced some solid golf yesterday. The pair sat two off the lead before a ball was struck in round 3 and will be pleased that they are still in contention following rounds of 68.

Straka couldn’t get the putts to drop and could only manage a round of 69. He enters today’s final round as one of the form players on Tour and will have serious hopes of winning his second Tour title.

Leading the betting is Mark Hubbard and it isn’t surprising following the momentum he will be carrying into today’s final round.

Hubbard has played some really solid golf throughout his first 54 holes and has just made one bogey in his last two rounds. Hubbard has yet to win on the PGA Tour and will be desperate to win his first maiden Tour title today. Clearly confident, if he can handle the pressure, he looks a wise investment.

Mackenzie Hughes often struggles for consistency but has so far produced some consistent golf to start the final day in outright second. The Canadian can often prove to be an all-or-nothing type of player, but if his putter is working he has every chance of success today.

Scott Stallings has quietly developed into one of the most solid players on Tour. Stallings had a great season last year, qualifying for the season-ending Tour Championships for the first time as well as posting seven top ten finishes. A tournament victory alluded the American last season but he could represent some terrific value today.

Sepp Straka is another player who had a fantastic season last year and the Austrian looks dangerously placed sitting just three shots off the lead. Straka finished 19th on Tour for total birdies last season and at a price of +800 could be a decent long shot option of the day.