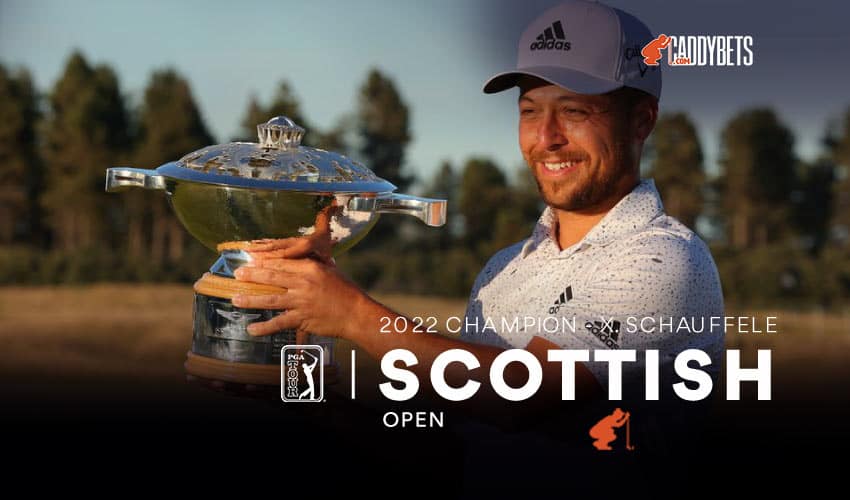 Schauffele got the job done in the 2022 Scottish Open

Schauffele Wins Second Tournament in a Row, Now a Co-Favorite at the Open Championship

Outside of winning an Olympic gold medal in last year’s Tokyo games, Xander Schauffele had seen his PGA Tour win slump reach the three-year mark and had just one top-five finish in individual competition after missing the cut at the Masters. Here our 2022 Scottish Open recap

Since then, Schauffele has made up for lost time.

After winning the Zurich Classic of New Orleans with Patrick Cantlay, Schauffele was fifth at the Byron Nelson, finished in the teens at the PGA Championship and U.S. Open then won the Travelers Championship two weeks ago.

Following a week off, Schauffele did it again by winning the 2022 Scottish Open on Sunday with a 7-under 273 for the tournament—one stroke better than Kurt Kitayama.

The event, co-sanctioned by the PGA Tour and DP World Tour as part of the first year of a new agreement, was held at the Renaissance Golf Club in Scotland—the same country at this week’s Open Championship at historic St. Andrews.

Schauffele began the day with a two-shot lead, but bogeys on three of the final four holes on the front nine but Kitayama briefly into the lead.

Kitayama bogeyed the 17th hole while Schauffele recorded birdies on 16 and 17, putting the eventual winner back up by two. After a safe bogey on 18 after Kitayama was in the clubhouse, Schauffele had his seventh-career PGA Tour victory locked up.

“If you’re trying to win when you’re on the bad side, you just have to be better,” Schauffele said. “I was telling myself that: it doesn’t have to be pretty. It wasn’t very pretty, unfortunately, but I got the ball in the hole and one better than everyone else.”

Schauffele is one of the favorites for this week’s Open (odds via Jazz Sports), listed now at +1500 with Jon Rahm, Scottie Scheffler, and Jordan Spieth. Only Rory McIlroy (+1000) is favored more. Schauffele has never played the Old Course before, so he said that he will skip the practice area this week and go right into playing as many holes as possible.

“Assuming I ever could completely ‘learn’ the Old Course,” he said, “it would take me a lot of rounds to do so.”

Kitayama, who has no wins on the PGA Tour but recorded his third top-3 finish of the season, got a great consolation prize for the runner-up finish: a spot in the Open Championship this week. Spots were handed out to the top three finishers who weren’t already in and finished in the top 10 here.

Jamie Donaldson and Brandon Wu were the other qualifiers.

Behind Kitayama on the leaderboard was Joohyung Kim, who finished in third at -5. Patrick Cantlay and Tommy Fleetwood tied for fourth at -4. Donaldson, Wu, U.S. Open champ Matt Fitzpatrick, and Cameron Tringale tied for sixth at 3-under. Tringale led by three strokes after shooting a 61 in the opening round but didn’t break 70 in the remaining three rounds.

The 150th Open Championship is this week and is the final major of 2022. Along with the favorites we mentioned, Tiger Woods is also entered in the event. Collin Morikawa is the defending Open champion, and the last winner at St. Andrews was Zach Johnson in 2015.