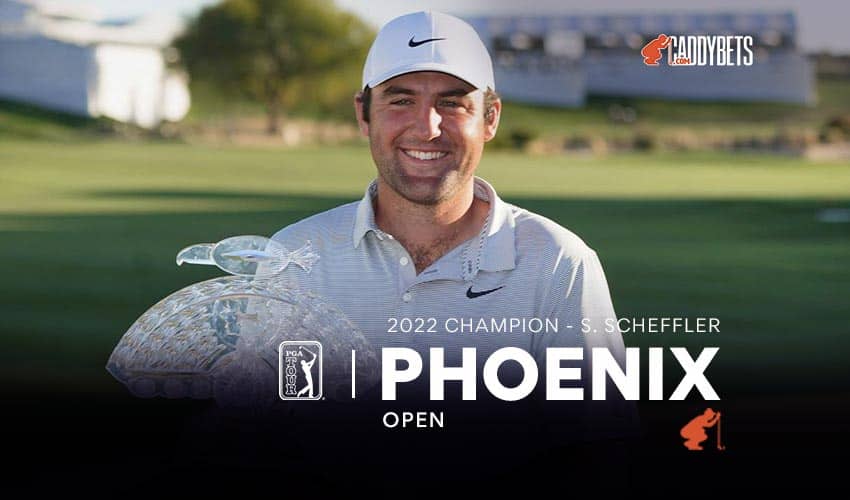 After the PGA Tour netted two first-time winners in back-to-back weeks, Scottie Scheffler knew that it could be his turn this week, and after a shaky-at-times final round amid a crowded leaderboard, Scheffler outlasted defending FedEx Cup champion Patrick Cantlay on the third playoff hole to win the 2022 WM Phoenix Open.

The largest and most boisterous crowd of the year in golf was treated to a thrilling Sunday, as Sahith Theegala led after rounds two and three, but finished a stroke shy of Scheffler and Cantlay, who tied at a 16-under 268. In addition, Scheffler and Cantlay’s Ryder Cup teammates Xander Schauffele and defending tournament champion Brooks Koepka finished tied with Theegala at one stroke back.

Scheffler—who shot a 62 on Sunday to enter the final day in third place—led the Houston Open as well on the final day before finishing in a tie for runner up. He was in a bit of trouble on Sunday after a bogey on No. 12 put him three strokes behind, but birdies on four of the next five holes got him back in contention.

“If you would have told me on 13 tee I was going to be in a playoff, I would have been pleased,” Scheffler said when looking back on his round. “I felt a little bit out of it at that point.”

Scheffler ended up catching Cantlay by hole 71, and both parred 18 to go to a playoff. Cantlay actually missed an 11-foot birdie putt that could’ve ended it.

After parring 18 twice more in the playoff, Scheffler sank a 25-foot birdie putt to win the tournament in the 25-year-old’s 71st PGA Tour start.

“I think the first [win] is probably always the hardest, and I definitely made it pretty difficult on myself today,” Scheffler said. “I kept telling myself there would be some bumps in the road. To kind of put things together yesterday and get through all the mistakes I made today and still pull it out is pretty amazing.”

Cantlay, who is having a great start to defending his 2021 FedEx Cup title, had four birdies and no bogeys on the day. Despite not having a victory this year, he’s finished in the top five in three of four starts with a ninth in the other event.

“Scottie, obviously, played really well this weekend and deserves to win,” Cantlay said after the playoff.

Theegala shot a 70 on Sunday to finish one shot behind the leaders to tie with Schauffele and Koepka. Billy Horschel and Swede Alex Noren were tied for sixth at -14, and Justin Thomas and Hideki Matsuyama were tied for eighth at 13-under. World’s No. 1 Jon Rahm was tied for 10th with Matt Fitzpatrick, Keith Mitchell, and Patton Kizzire.

With the win, Scheffler moved into fourth place in the FedEx Cup standings. Matsuyama retained the points lead, and Tom Hoge—last week’s winner—stayed in second with a 14th place finish.

The PGA Tour heads back to California for the final stop out west before beginning the Florida swing. Collin Morikawa and Rory McIlroy come back on the tour to join Rahm, Cantlay, and many of the other top stars for the Genesis Invitational at Riviera in Southern California.

Join us to receive our daily Golf content and make sure to stay tuned for 2022 WM Phoenix Open updates, golf news, and PGA Tour schedule.