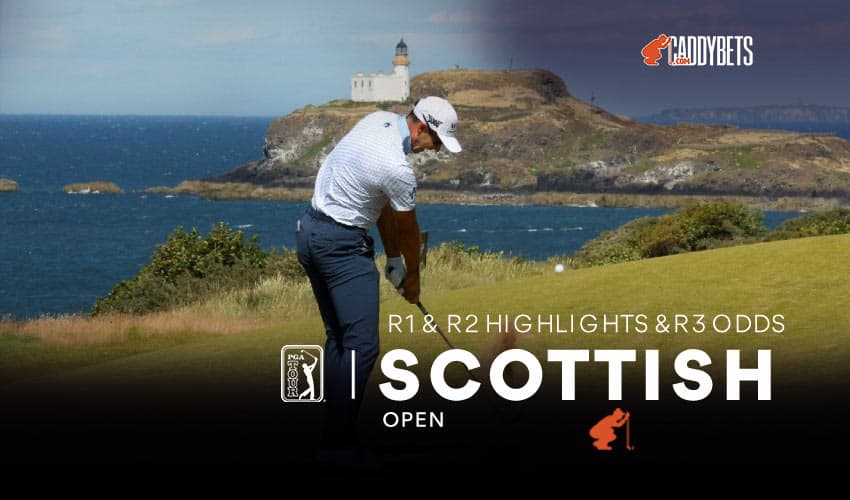 With only Rory McIlroy missing from the world’s top ten golfers, the field for this week’s Scottish Open was absolutely loaded.

But after two rounds, there is a lesser-known name sitting at the top of the leaderboard – and that is World number 55 Cameron Tringale, who leads the tournament by three strokes.

Tringale is in this position courtesy of his superb Round 1 performance which was something truly special to behold.

The American tied the course record after shooting a stunning -9, 61. During his second round, he looked to be carrying on in the same vein and started to pull further away from the chasing pack.

However, a sloppy back nine would cost Tringale and he would go on to score a +2, 72 to only hold a slender lead heading into today’s crucial third round.

The Renaissance Club where this event is being held is playing long and tough, and several established names have missed the cut. Justin Thomas, Hideki Matsuyama, Viktor Hovland, Will Zalatoris, Scottie Scheffler and last year’s Open Champion Collin Morikawa will all need to find something different to do this weekend.

Instead, chasing Tringale is a host of unheralded names such as Doug Ghim, Kurt Kitayama and Jordan Smith.

There are some dangers in behind and two Major Champions find themselves within four strokes of the lead with Gary Woodland and Matt Fitzpatrick looking to make a move over the weekend.

Everything looks perfectly set for a windy and wild weekend!

Cameron Tringale is the current tournament favourite and with a three stroke lead it’s easy to see why. Tringale has been in this position numerous times in his career but has always struggled to convert. Still without a victory on the PGA Tour, the pressure could get to him, as it has proved in the past. This tournament is wide open.

Hot on the tail of Tringale is recent US Open winner Matt Fitzpatrick. Fitzpatrick is making his first start since his major breakthrough and the Englishman looks full of confidence. A four under 66 in his second round was one of the best rounds of the day. Fitzpatrick excels in blustery conditions and could be the man to watch out for.

It’s been some time since Gary Woodland was in the winners circle and the man from Kansas will be determined to end his three year wait for a win. Woodland is nicely positioned just three strokes behind Tringale. Whether Woodland can handle the pressure remains to be seen.

Another man just four shots behind and poised for a challenge is Xander Schaufelle. The American is a recent winner of the Travelers and his second round five under 65 saw him bounce right into contention. In tough conditions, Schaufelle kept his ball under in control and if he can play in a similar fashion over the next two days he will be a tough man to stop.

At a bigger price it could be worth siding with Rickie Fowler. Fowler is nowhere near the force of old but thrives on links courses. The American has posted several top 5 finishes at the Open and whatever conditions lay in store he should be able to handle them.