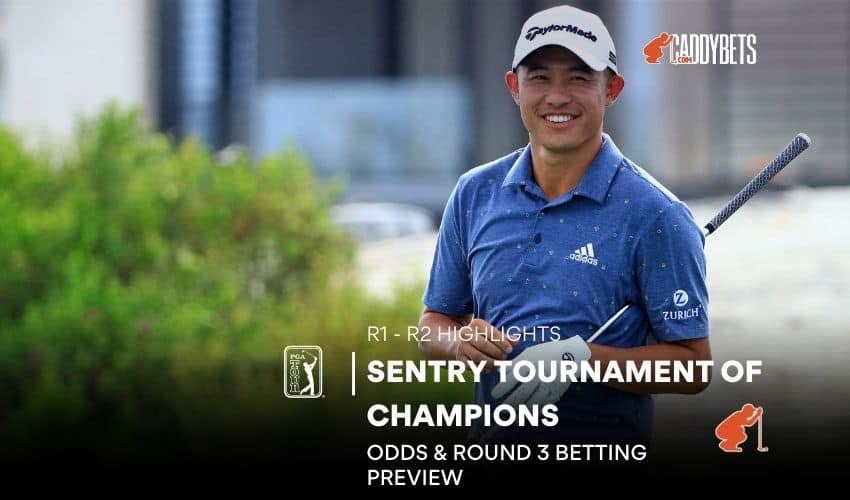 The 2023 calendar year on the PGA Tour has kicked off in style with two fantastic rounds at this year’s Sentry Tournament of Champions. Exclusive to only those who won on the PGA Tour last season, or those who finished inside the FedEx Top 30. Seventeen of the world’s top twenty are in action this week, and to nobody’s surprise, the action on the greens of the beautiful Plantation course in Hawaii hasn’t disappointed. Here our Sentry Tournament of Champions 2023: Round 1 & 2 Recap + Round 3 Betting Preview

Records fall as Rahm leads after Round 1

Set upon the shores of the Pacific Ocean, the wind can wreak havoc on the Plantation course but during Thursday’s first round it was non-existent. With the course’s defence lowered, Plantation was there to be picked apart and Jon Rahm made no mistake.

Twice a runner up at this tournament, Rahm started his week in the perfect way to lead the tournament on -10. Nestled in just behind the Spaniard at the end of the first day were the American duo of Collin Morikawa and J.J Spaun who finished on -9. The average score for round 1 was 67 which was the lowest first round average score ever recorded at the tournament.

Morikawa takes control of Round 2 as the wind swirls

Despite a poor 2022, Collin Morikawa was deemed as one of the more likely contenders for the week. Morikawa has performed well at this tournament in the past and has an abundance of experience on the course having first played it when he was just nine.

Round 2 was played in much breezier conditions, but Morikawa showed why he is a former Open champion with a confident and assured display. The American quickly found himself in the lead with four birdies in his five holes. Despite the wind swirling, Morikawa’s short game was in superb condition. Three more birdies followed as Morikawa posted a superb second round of -7 to lead the tournament by two on -16.

J.J Spaun carried on his good form from the first round to sit in a tie for second place on -14 alongside the current Masters Champion Scottie Scheffler.

With almost half of the 39-man field lying within seven strokes of the lead everything is set up for a fantastic weekend of golf.

With his two-stroke lead, Collin Morikawa is the favorite for the event at the halfway stage. Morikawa had a frustrating season in 2022 and went the whole season without a win. Speaking ahead of the tournament, he has stated how much work he has done with his putting in the off season, and it clearly seems to be paying dividends so far. If he can keep the putter hot heading into the weekend, he will be the man to beat.

Scottie Scheffler heads into the final 36 holes as the second favorite and he will be desperate for a victory. For much of 2022, Scheffler was the top dog in golf, the Masters Champion and former world number 1, Scheffler struggled in the back half of 2022 and lost his world number 1 crown to Rory McIlroy. The Texan is desperate to reclaim the top spot and a win here will put him right back into the conversation.

Rounding out the top three in the betting is Jordan Spieth. Spieth will start the day three behind but will be confident of victory over the weekend. A former champion of this event back in 2016, he has posted a string of top ten finishes since and could be the value play of the weekend.

Follow us on Social Media for more Sentry Tournament of Champions 2023 updates!