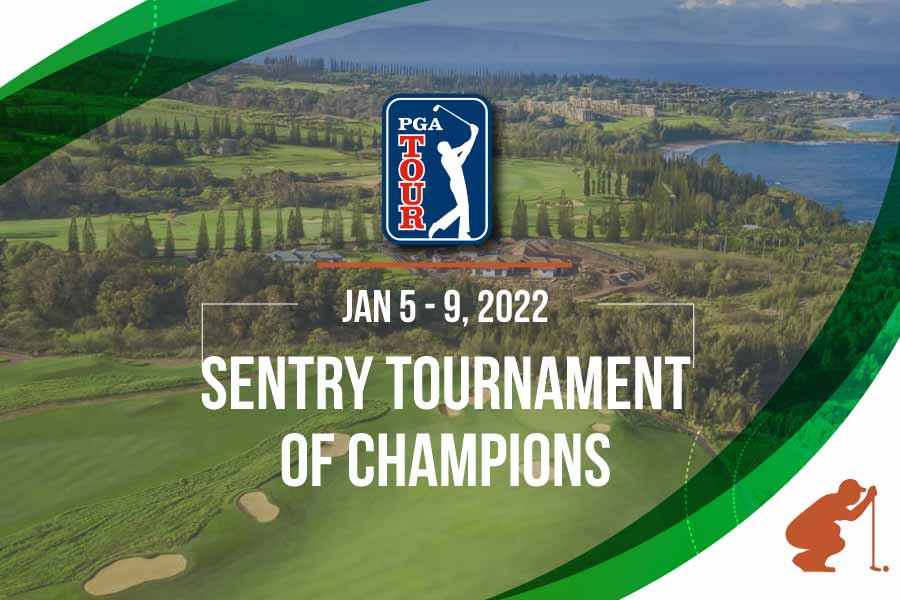 After a month-long break of unofficial money events and then the Christmas and New Year’s holidays, the PGA Tour is back in business in 2022, starting with back-to-back events in Hawaii and then onto the traditional West Coast swing after that. Here we have the Sentry Tournament of Champions odds and preview.

The Sentry Tournament of Champions dates back to 1953, and the field is restricted to golfers who won an event on the PGA Tour in the previous calendar year. The field stands at 38 despite there being 39 winners last year. Rory McIlroy is the lone winner not to commit, but Xander Schauffele was invited due to his Olympic gold-medal win. Cameron Champ also withdrew due to a COVID-19 diagnosis.

Jack Nicklaus holds the tournament record of five wins, while Dustin Johnson and Phil Mickelson are the only two-time winners in the field. Harris English is the defending champion.

This event has been held on the Plantation Course at the Kapalua Resort on the Hawaiian island of Maui since 1999. The course is a rare par 73 and underwent an extensive renovation before the 2020 event. It took players a little while to get the hang of it, as the average round was a 72.228 that year and was won by Justin Thomas at 14-under. Last year’s average dropped to 69.315 and won by English at 25-under—the fourth-best winning score posted at Kapalua.

After a Ryder Cup defeat and missing the cut at the European Tour’s Andalucia Masters in his home country of Spain in October, Jon Rahm shut things down after an extremely successful 2021, which included a U.S. Open title and a runner-up finish at the Tour Championship for the FedEx Cup. This is his fourth time at this event, and he’s landed in the bottom half of the top 10 in his three appearances. He is the betting favorite at +750 and leads a field that is hosting eight of the top-10 and 16 of the top-20 golfers in the Official World Golf Rankings.

(+800) won on the redesigned course in 2020, is the only two-time winner at Kapalua, and owns four top-3 finishes here. Thomas won The Players Championship but otherwise had a quiet year before turning it on towards the end of the fall portion of the 2021-22 season. He finished third in the World Wide Technology Championship at Mayakoba and was fifth at the Hero World Challenge in another star-studded, limited-field event.

(+1000) made plenty of headlines in the final month of 2021. He won the European Tour’s Race to Dubai and DP World Tour Challenge, becoming the first American to do either. He also led by five strokes going into the final round at the Hero World Challenge but faltered on Sunday to not only cost him the win, but the chance of taking over the No. 1 world ranking from Rahm as well. Expect a competitor like Morikawa to want to get that experience behind him, and he has two top-7 finishes here in his two attempts.

(+1000) The defending FedEx Cup champion won the last two events he played (BMW Championship and Tour Championship), but besides taking part in the U.S.’s win at the Ryder Cup, he’s been silent since. A four-time winner last year, Cantlay has one top 10 in three appearances in this event.

(+1000) Who hasn’t played an official event since finishing seventh at the Tour Championship. Prior to that, he was runner-up at the BMW Championship, losing a six-hole playoff to Cantlay, and was eighth at the WGC-FedEx St. Jude Invitational. He’s come in seventh in his last two times around Kapalua.

(+1200) is the third golfer who made the most headlines over the fall, having defended his title at Mayakoba and then won the Hero World Challenge in his last two tournaments. An improved touch around the greens has made this already-dangerous golfer nearly unstoppable.

With the small field, there aren’t huge longshots, but there are plenty of golfers to keep an eye on further down the odds board. One is Sungjae Im (+2500), who led the PGA Tour in birdies last year and was tied for fifth in his debut in this event after shooting four rounds in the 60s. Im has a win and another top 10 in four events he played in this past fall.

(+2500) has had better results in the fall after an illness set him back over the summer. He has a win and two runner-up finishes here along with a third-place effort last year. He came in third at the Hero World Challenge his last time out and was runner-up at the Butterfield Bermuda Championship in October—both coastal courses like Kapalua.

While Rahm is back and must be respected, it seems like bad value to take him at this point, given that we’re not sure where his game stands after the long layoff. Same goes for Cantlay, who hasn’t played since September.

For golfers with short odds, Thomas and Hovland would be better choices, along with Schauffele. We also like Reed and defending champion Harris English (+3000) isn’t a bad flier either.